The species were short-beaked common dolphins and weighed 100 kilograms (220 lbs) each. 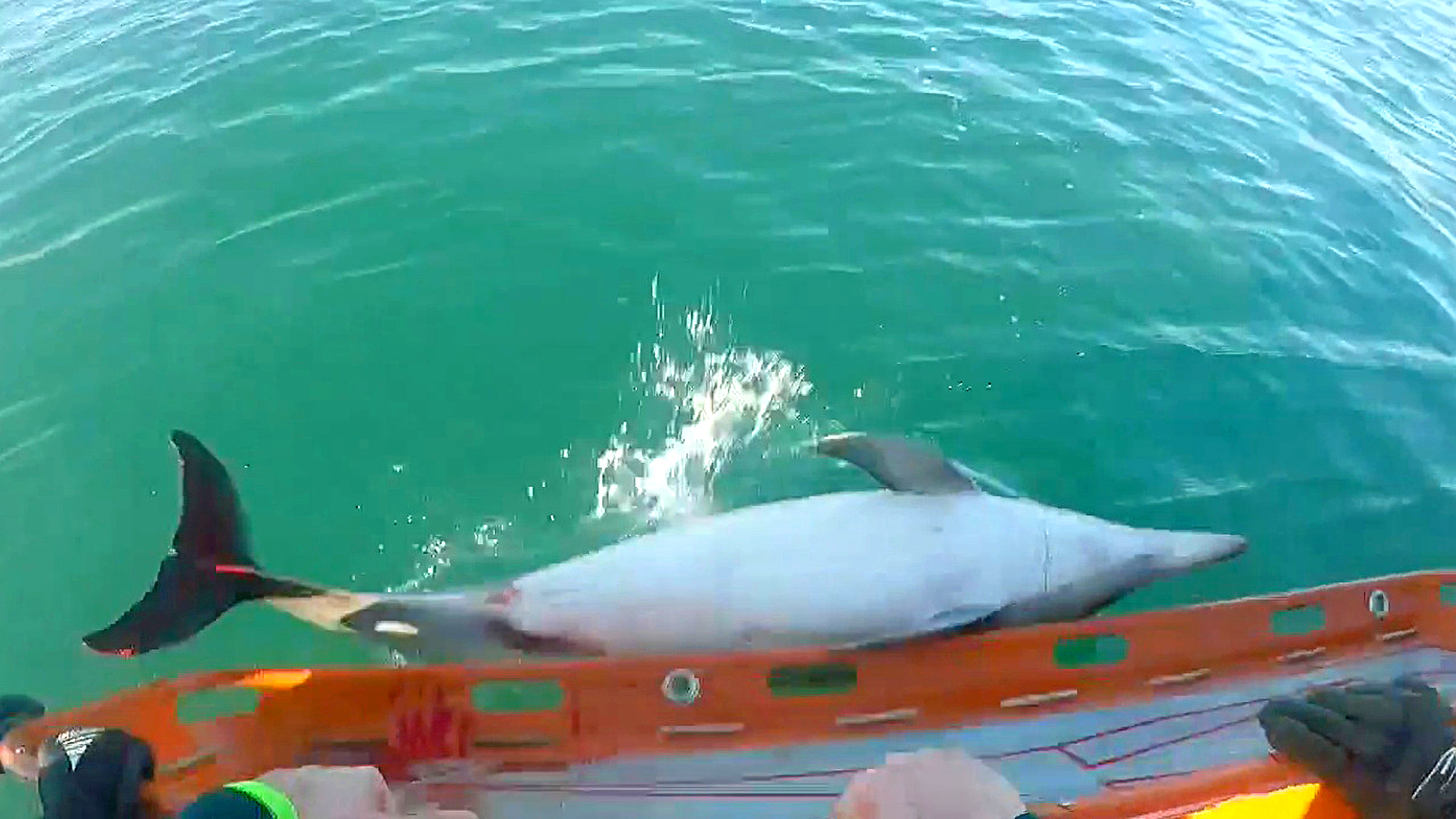 Cancale, France – Two dolphins were rescued on Jan 9 from Cancale, a commune in the Ille-et-Vilaine department in Brittany, north-western France, after they were stranded by Europe’s strongest tides.

“I received a phone call from the firefighters at 9:30 am,” said Gabriel Gautier, director, AI lark Association, a wildlife conservation organization. “We are part of a network of organizations in France that are qualified to intervene when marine wildlife beached on our shores. So, when the firefighters received a call from locals telling them dolphins were stranded in the shallows, they contacted me.”

He said that the species were short-beaked common dolphins (Delhphinus delphis), and weighed 100 kilograms (220 lbs) each.

The rescue operation lasted for two hours. They were placed on a stretcher and hauled onto the firefighter’s pneumatic boat. Later, they were released into the sea.

“With the help of the firefighters we managed to rescue the dolphins and take them out to sea, to freedom. It was not easy because the animals were very stressed,” said Gautier.

He explained that dolphins are very sensitive to stress, and could have suffered a heart attack “at any moment.”

On being asked the reason behind the stranded dolphins, he said, “We are in the area that has the strongest tides in all of Europe. Dolphins passing through can easily become trapped by the tide.”

European hypertidal processes include Bristol Channel and Severn estuary in southwest England and the Gulf of St. Malo in Normandy, France. These areas experience one of the highest tides in the world and spring tidal ranges exceed 10 meters.

“Tidal highs and lows depend on a lot of different factors,” stated National Oceanic and Atmospheric Administration in a report. “The shape and geometry of a coastline play a major role, as do the locations of the Sun and Moon. Storm systems at sea and on land also shift large quantities of water around and affect the tides.”

Currently, there are 86 species of cetaceans (whales, dolphins, and porpoises) in the world. Many species are tagged as endangered, and several of them are on the verge of extinction.

“The health of many of the world’s cetacean populations is threatened by bycatch, pollution, habitat destruction, over-fishing, and climate change,” stated The Whale and Dolphin Conservation Society in a report. “Other threats include activities that may frighten, displace or harm these species such as underwater noise pollution from sources such as shipping traffic, wind farms, seismic surveys and military sonars.”