Discover the Cave of Swallows, a Magical Place Hidden in Mexico

The chasm is so deep that it seems bottomless.
By Vanessa Sam and Christian Valera Rebolledo January 16, 2021
Facebook
Twitter
Linkedin
Email 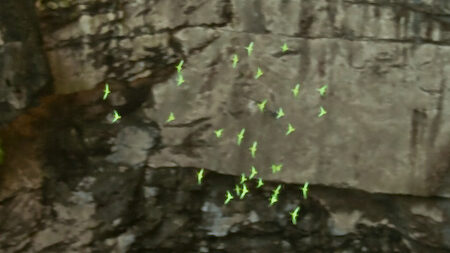 Many magical places surrounded by nature and fresh air can be found in San Luis Potosi, Mexico. One such place is the Pueblo Mágico (Magic Town) of Aquismón, located in the Huasteca Potosina region, which is also the site of the most famous chasm in Mexico: a giant cavity formed over millions of years by the limestone soil’s erosion.

The region’s animals include many birds, such as cave parrots, parakeets, bats and swifts — often confused with swallow — which gave the chasm its name.

The magic of this Potosina cave

The Sótano de las Golondrinas (Cave of Swallows) was discovered in 1967. The cave has an opening of about 65 yards, which leads to a natural hole with a depth of nearly 600 yards that is divided into two sections, one descending 192 yards and one reaching 411 yards.

Visitors attempting to descend the chasm must be careful. After all, reaching the deepest level may seem like an endless journey. Tourists need expert guidance to descend it, but those who have tried the experience attest that it is worth the effort. Each sunrise and nightfall, this cave turns to be one of the most vibrant places in the state, as it becomes the departure point for thousands of birds who shatter its silence.

“The magical moment in this cave comes alongside the first morning’s sunbeams when the birds emerge from the deep abyss in search of food,” said Edmundo Zorrilla, a tour guide who works in the area. “They always fly counterclockwise; they rise with the air currents and use it to warm their feathers. It is beautiful, a natural phenomenon that everyone should appreciate at least once.”

The regional flora and fauna belong to the high jungle ecosystem, with animal species such as the jaguar, wild boar, anteater, armadillo, oncilla, deer, skunk, tepezcuintle (lowland paca,) ocelot, raccoon, ounce and cougar. Other species include the swift, snout, cuanchi turkey, hummingbird, crow, black chachalaca, buzzard, hawk, trogon and woodpecker. There are also reptiles, such as the tree frogs and the four-nosed reptile.

Native trees in the area include the oak, fig, pemoche, Palo Rojo, camedor palm, red cedar, ceiba and avocado, among others, according to the Ministry of Ecology and Environmental Management.

The cave is the sixth most bottomless and most beautiful underground abyss and acts as a shelter for local biodiversity. It is part of the Protected Natural Area of San Luis Potosí, as no human hands have modified it. The caves of Mantetzulel and Hoya De Las Guagas in the municipality of Aquismón and the Sacred Caves of Wind and Fertility in Huehuetlán are also a part of the protected area.

“Of course, the most common type of visitor we receive are those interested in activities such as rappelling and rope descents. It has one of the world’s longest streaks to practice free-falling,” said Edmundo Zorrilla. “What I am referring to is that someone free-falling will not touch any walls for near to 380 meters (415 yards)! To get a better idea of the depth, we could say that the Eiffel Tower could fit inside just nice.”

There are many sites to discover inside the Huasteca Potosina, which awaits tourists looking for new, relaxing and beautiful places to visit. To get to the Cave of Swallows, one can leave the Pueblo Mágico of Aquismón through the Benito Juarez highway. It takes approximately 40 minutes to reach the destination. From there, visitors must abandon their vehicles and continue by foot for about 15 minutes until they reach the chasm’s entrance.

«Previous Post
Buñuelos Offer a Taste of Mexico’s Culinary Past»Next Post
Beauty and the Beast: Whatever You Do Don’t Kiss it, Princess