Curiosity County: A Mini Europe In The Heart Of Bengal 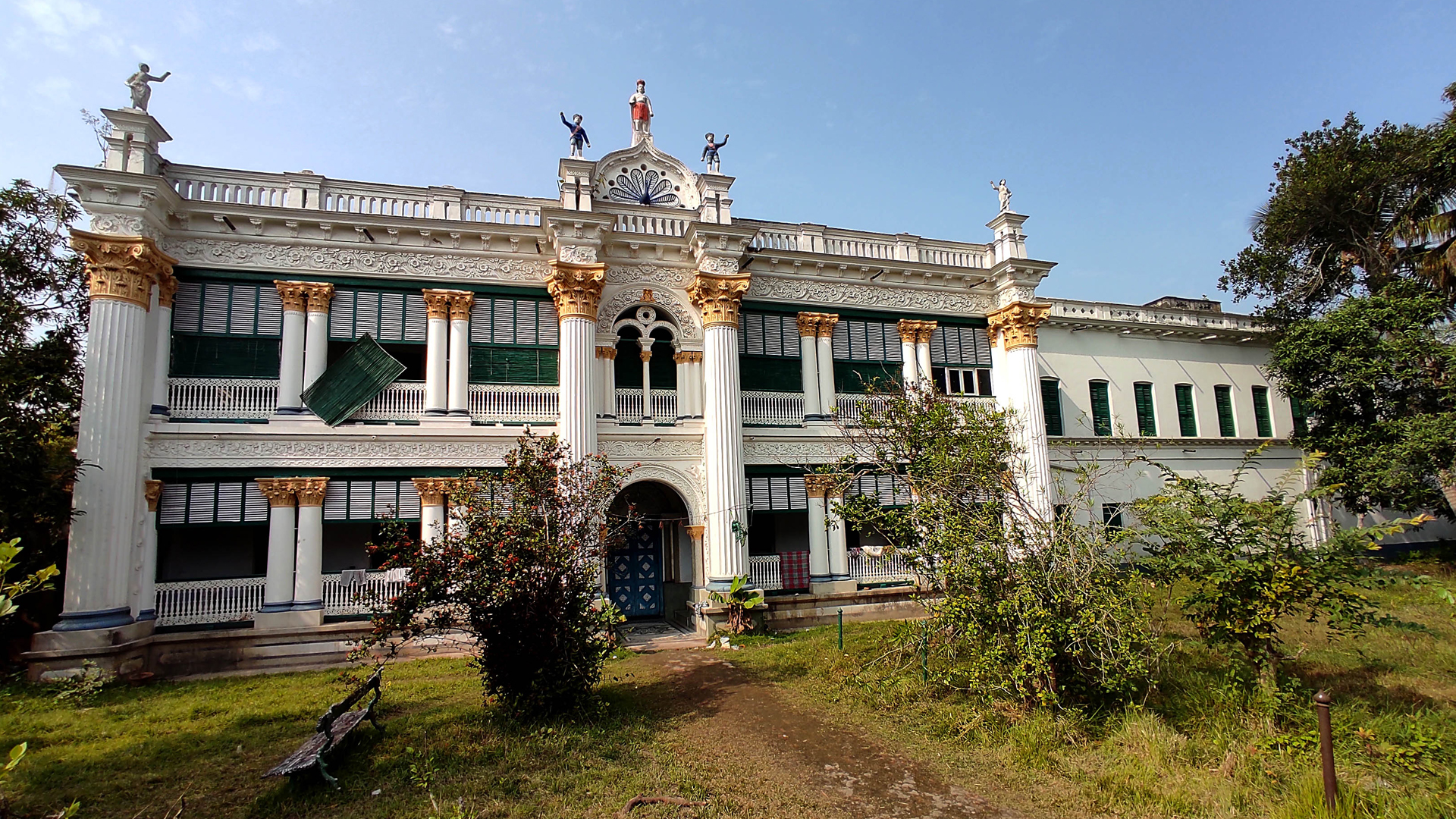 The Ballabh mansion, which is around 175 years old, is better maintained than many of the other heritage mansions in Dhanyakuria. (Saptak Datta)

The town was once a part of the Bengal delta, Sundarbans, and was covered in saline water bodies and thick jungles, until the forests were cleared and it was turned it into a habitable settlement around the 1740s.

“During the mid 18th century, Bengal was a hub for business,” said Shamita Sarkar, Associate Professor of History, Vidyasagar College, Kolkata. “It quickly achieved importance because of the trading opportunities it offered. Calcutta (now Kolkata) was the capital of the British Raj from 1772 to 1911 and during their 200- year reign, many architecturally significant houses were build in Bengal.”

Gaine Bagan Bari
Our first stop is the Gaine Bagan Bari (country house) that is estimated to be roughly 200 years old. Closed to the outside world by imposing iron gates, a peek inside reveals a fairy-tale castle covered in thick roots and lush green leaves.

The two-storied mansion is anchored with Ionian pillars There is a domed roof at each end of the mansion. Interestingly, the first two floors have European-style arches, but the top floor shows Islamic influences.

Entering the premises is prohibited ever since the vintage structure built by Mahendranath Gaine was secured by the government of West Bengal in the mid-90s and was declared a heritage site.

A narrow lane that runs beside the Gaine Bagan Bari, leads to the main palatial mansion of the Gaine family. Orange-ish in hue, the L-shaped mansion is another example of Indo-European fusion architecture.

“The Gaine family of Dhanyakuria were leading traders back in the day,” said Monojit Gaine, a descendent of Mahendranath Gaine, who resides in the mansion. “We traded with the British in jute, jaggery and other agricultural products and made good money.”

“Since we enjoyed British company and patronage, our family was successful in building a mansion inspired by those in Europe,” he said. “The temple, which is beside the main house, is also European in style and was built in 1821.”

These days, the Gaine Mansion is a favorite destination for several movie directors and many well-known Bengali movies such as ‘Saheb Bibi Golam’, and ‘Satwenashi’ have been filmed in these premises.

After exploring the Gaine mansion, we take a bumpy, narrow alley to reach the principal residence of the Sahoo family. The grand mansion is painted white and has grand Corinthian Pillars and stucco relief (fine plaster used for coating wall surfaces or molding into architectural decorations). This mansion was built by Patit Chandra Sahoo in the early 19th century.

The courtyard of Sahoo Mansion is opened occasionally on a request made to the town council. The entrance leads to a magnificent “thakurdalan” (courtyard) with five curved arches embellished with stucco work. The two floors of the mansion are connected to each other by dusty wooden stairs with iron balustrades.

The Sahoos were one of the prominent Zamindars (erstwhile autonomous or semi-autonomous rulers of a province). In 1885, Upendranath Sahoo, the original owner of the house, along with Mahendranath Gaine, built the first English school of the town.

The current owners of Sahoo Mansion live in North Kolkata and seldom visit it, as Radhi Sarkar, a 68-year-old caretaker is in charge of the house claimed.

“Maintaining such an old house isn’t easy,” said Sarkar. “I come daily to this house early in the morning and leave just before sunset. There are five women employees who clean the ‘thakurdalan’ every alternate day. The upper floor is usually locked, and opened once a year during Durga Puja when the current owner visits the house.”

Walking approximately a mile southwards down the alley, there is another stunning old mansion, which is called the “Sahoo Bagan Bari.” It is said that the house was a leisure retreat for the Sahoo zamindars and their British friends.

The front of the house is well maintained, but the backyard is covered with tall grasses, and roots of several banyan trees. A peek inside the mansion, through one of the broken windows, reveals an old piano and a gramophone covered in dust and cobwebs.

Going inside the house is completely prohibited, but the lawn in the front of the house has been colonized by local kids who have turned it into a playground.

Ballabh mansion, also known as ‘Ballabh Bati’ (Ballabh’s house), is the same age as Gaine castle and was built by Shamyacharan Ballabh, a rich jute trader. The current generation of Ballabhs live in central Kolkata and occasionally visit the century-old mansion, which is centrally located in the town.

Locally, the mansion is termed “Putul Bari” (house of dolls) because of the three figurines in European attire that stand guard on the terrace of the house, each accompanied by an engraved peacock.

The mansion has well-crafted iron gates and fencing, and stucco work along the corridors on both floors. At one end of the premises, there is a three-storied tower painted in yellow. The top of the tower flaunts two human figures carved out of iron.

The house has an exquisite boat-shaped balcony that leads to a small pond in the backyard, which is now used by local women to wash clothes and utensils.

Traveling down further this road, there is a nine-pinnacled Rasmancha (a traditional performance stage for musicals), which is evidence of the dominant Vaishnava (worshippers of the Hindu deity Vishnu and its avatars) culture in the region.

Painted in white, the temple has a five-arched entrance on each side. The idols of Radha-Krishna are still worshipped here and the tradition is still carried on by upper-caste women of the town. Radha, in Hinduism, is the gopi (milkmaid) who became the beloved of the god Krishna during that period of his life when he lived among the gopas (cowherds) of Vrindavan. In the bhakti (devotional) movement of Vaishnavism, Radha, is sometimes interpreted as symbolizing the human soul and the male, Krishna, as symbolizing God.

Just outside the town of Dhanyakuria, the “Basu Bari,” which is estimated to be nearly two-centuries old, stands tall. The two-storied mansion was built by Narendrachandra Basu in the early 19th century.

“Our ancestors have been living in this area for the last 300 years,” said Bishwanath Basu, an actor and the descendant of Narendrachandra Basu. “The house was constructed around 1825-1830. He (Narendrachandra) was one of the prominent zamindars in that region and an ally of the British.”

“The British influence in this region was a lot more in the early 19th century than any other place in West Bengal,” he said.