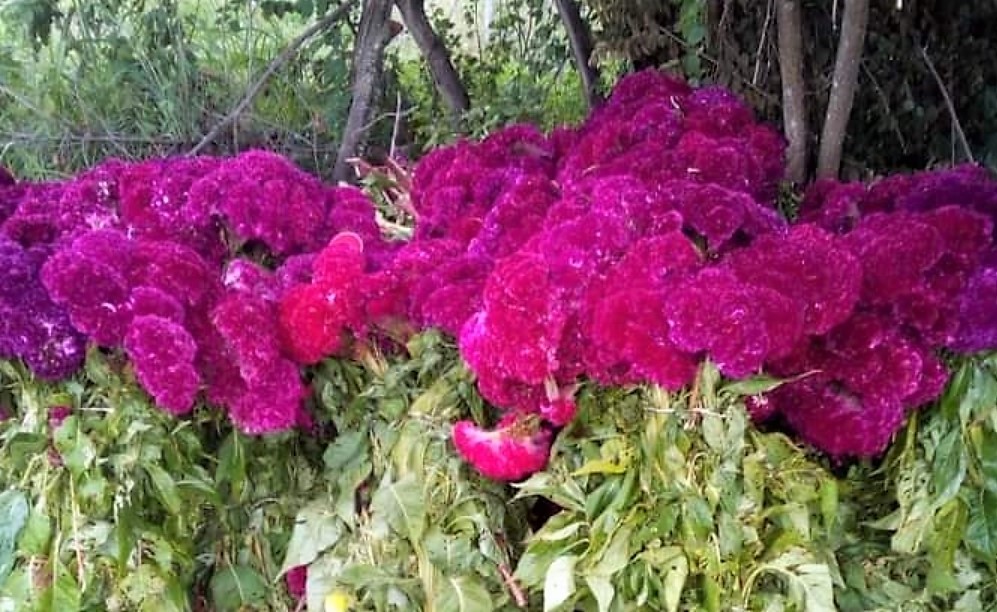 Celosias’ striking color and texture contribute to their appeal. Whenever these flowers are around, they catch everybody’s eye, and people might want to touch them. They bloom in Mexico throughout the year, but producers harvest them in fall.

The Celosia Argentea Cristata’s petals resemble velvet. Celosias are annual herbaceous plants from the Amaranthaceous family that can reach 40-60 centimeters (roughly 16-24 inches). There are about 50 types of celosias.

Nigerians call them sokoyokoto, which in Yoruba means “the vegetable that makes your husband’s face rosy,” according to “Lost Crops of Africa,” a research paper sponsored by the National Research Council of the National Academies.

Celosias are endemic to Asia and Africa, but now farmers in South America and Mexico plant them. In the latter, producers grow celosias in the states of Mexico, Guerrero, Puebla, and Morelos. The harvest period spans from September through December.

Celosias are ubiquitous in Mexican markets around the Day of the Dead festival in early November. They have beautiful shades of purple. So, Mexicans use them along with other flowers to decorate graves and offerings to the dead. Market vendors say that the season’s favorites are celosias, baby’s breaths, marigolds and wallflowers.

“I used to have good celosia sales before the pandemic,” says Isidoro Reyes Juárez, a producer. “I supplied these flowers to markets in Mexico City and here in Veracruz. Many people seek celosias to decorate the Day of the Dead altars or graves on these dates. They are affordable flowers.”

Celosias also have medicinal properties. Traditional doctors use them as astringent, antibacterial and purifying agents and treat fevers, headaches, diarrhea, dysentery, hemorrhoids, herpes, and ulcers with them.

Celosias are edible, as well. Africans, especially Nigerians, grow them for their nutritional values. “They are primarily eaten in a dish prepared from various vegetable greens, combined with onion, eggplant, hot peppers, palm oil (or other vegetable oil) and fish or meat. Sometimes, peanut butter is also added as a thickener,” says “Lost Crops of Africa.”

Mexicans often cook with flowers, but so far, no dishes are known to include the so-called velvet flower. “I don’t know if they are edible or not; people don’t use them like that,” said Reyes Juárez.

“We undersold and almost gave away the crop due to the pandemic. Unlike other years, we barely sold them because cemeteries did not open, and people used celosias only on their altars. It was a bad year for us producers. Let’s hope that next year is different,” says Reyes Juárez.