Why Is Popcorn the Star in Theaters?

Wherever movies are shown, that buttery sensation remains the preferred snack. 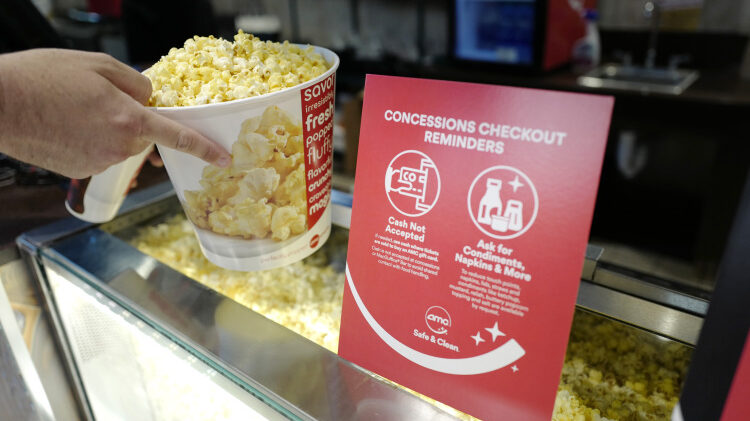 At home or in the theater, movie watching shares one tradition: eating popcorn.

The second a person enters a movie theater, their senses are  overwhelmed by the buttery smells and flavors of this corn snack.

“We must recognize that popcorn is made to cater to everyone’s taste, no matter if they are young or old, nor in which country we live. In Mexico, although everyone knows that their name is palomitas (popcorn,) people also call them ‘Alboroto,’ ‘Gallitos,’ ‘Poporochos,’ ‘Chivitas,’ ‘Cotufas,’ among others. T his snack is a balanced and complete food item, providing fiber, minerals, and vitamins, among other health benefits,” said Horacio Barradas Meza, a sociologist at Universidad Veracruzana.

How did the relationship between popcorn and cinema begin?

It started in the U.S. in the Great Depression.

At the beginning of the 20th century, people went to neighborhood nickelodeons. But by 1927, when sound was introduced, thousands went to the movies weekly, which cost 20 cents per viewer.

The projector rooms’ owners were strict regarding food consumption and did not accept any snacks that could blemish their property. They wanted to preserve a classical theater look, so they sought to keep their rugs and carpets clean.

However, this stance opposed the viewer’s desire to eat while watching the show, , which in some cases were double feature.

Food vendors saw an opportunity and established themselves in the outer areas of cinemas. But in 1929, America suffered a severe economic decline. In turn,  food vendors started to sell corn-based products, which were cheap.

By 1938, the dwindling economy forced the owners to adapt food courts in the cinema to amass more profits.

Owners installed popcorn machines at the theater’s entrance, while other food vendors sold snacks inside the building in exchange for a daily rate. When the Second World War arrived, the United States government rationed various essential products; popcorn was not among them.

Thanks to this, popcorn became famous as a snack, first in movie theaters and later for personal consumption.

People had already ingrained popcorn as part of the film experience when the war ended, a practice which soon spread across Europe. In the 1950s and ’60s, when families could easily add a television to their houses, popcorn intake skyrocketed in households.

In the 1970s, the personal microwave arrived in American homes, making popcorn even more accessible!

Turns out, popcorn has a long cultural history.

“Recently, it was discovered that inhabitants of Peru had eaten popcorn  some 7,000 years ago, while ancient Mexicans ate it for about 9,000 years! When Christopher Columbus arrived in 1492, he noticed that some natives used necklaces made out of corn.

In 1519, when Hernan Cortes entered Mexico-Tenochtitlan, he saw Aztec priests carrying amulets made out of corn. In 1893, the first movable popcorn machine was invented, and from there, the industry skyrocketed. A food empire, shared by cinemas, theaters, and circuses, where popcorn reigns supreme,” said Barradas Meza.

Currently, popcorn is synonym with movies, whether in a movie theater or at home. The smell permeates the senses. It is a delicious snack that appeals to old and young alike.

(Translated and edited by Mario Vázquez, edited by Fern Siegel.)

«Previous Post
Spoiler Alert! A Bacteria-Eating Virus Can Save Fruit Juice  »Next Post
The Marvelous World of Marbles