The military is “trying to identify people who are in hate groups or some of these militias,” a former Navy judge advocate says. 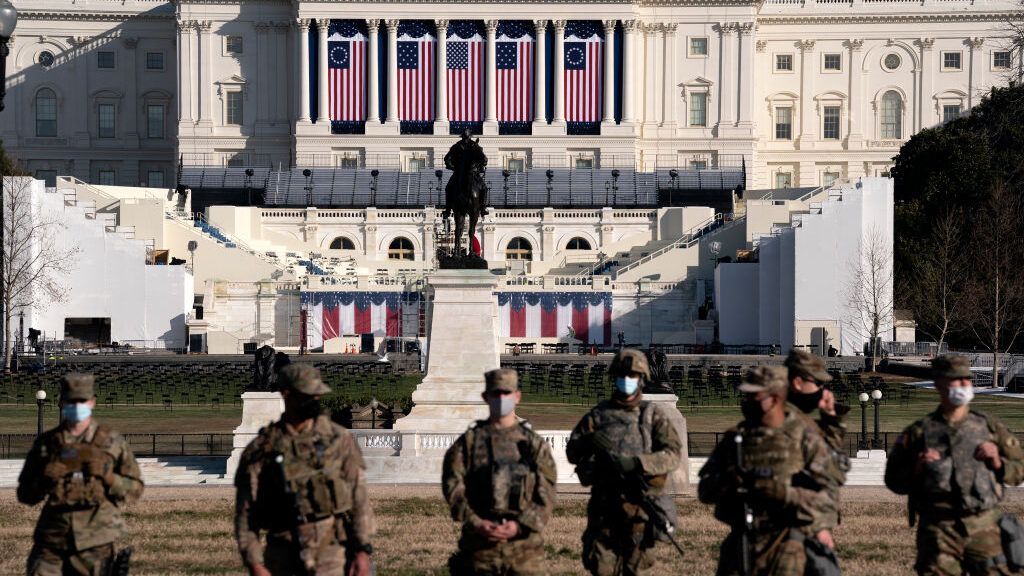 Members of the National Guard stand outside the U.S. Capitol. Security was increased throughout Washington following the breach of the U.S. Capitol Jan. 6, and leading up to the Presidential Inauguration. (Stefani Reynolds/Getty Images)

WASHINGTON — Military veterans and experts are voicing concerns that some comrades-in-arms have fallen sway to extremist groups and conspiracy theories, as fears of more armed attacks loom over the inauguration of President-elect Joseph R. Biden Jr.

Among those who have expressed alarm in the wake of the Jan. 6 storming of the U.S. Capitol was Rep. Jason Crow (D-Colo.), a former U.S. Army Ranger and veteran who served in both Iraq and Afghanistan.

Crow urged Secretary of the Army Ryan D. McCarthy on Jan. 10 to launch expedited investigations and convene courts-martial against any service members involved. He also asked the Pentagon to vet troops sent to secure the Jan. 20 inauguration to “ensure that deployed members are not sympathetic to domestic terrorists.”

The Joint Chiefs of Staff also issued a memo to service members condemning “sedition and insurrection” at the Capitol and reminding them of their oath. Director of Defense Intelligence Garry Reid said in a Jan. 14 statement that the Pentagon is “doing everything we can to eliminate extremism in the Department of Defense.”

Joe Kassabian, an author and Army veteran, told Zenger News he doesn’t believe the trend of service members and veterans gravitating toward conspiracies and extremism is new. Intensified by social media, he said, some veterans are looking to replace the sense of belonging they had in the military.

“I think what’s new is the fact that we can see it on Twitter, Facebook and Instagram,” he said. “I think they want to belong to something that gives them a purpose. … I think they are despondent and alone.”

“If you look at people responding to ‘Q’ influencers, many say that their families don’t talk to them anymore. But they’re immediately given affirmation by 30 people,” he said. “Most of these people are pretty detached from their families, or don’t have one, and want to belong to something and have that again. It could be Q, or groups like Three Percenters or Oath Keepers. I think a lot of those people just want to be a part of something and it doesn’t matter what.”

Retired Army Col. Mike Jason, a former battalion commander with multiple deployments to Afghanistan, Iraq and the Balkans, said that while the overwhelming majority of veterans are “horrified” at the Capitol riots and extremism within the ranks, some might have outsize influence among domestic extremist groups.

“We should take it seriously. In countries that have had significant domestic problems or revolts, ex-military folks do play a role. If nothing else, they have the credibility [among] the followers, and instant popularity and trust,” he told Zenger. “At the same time, that could be our solution. If people that are ex-military see the light or turn, they could have great influence as well to tone it down.”

Though Jason warned against making generalizations about veterans — calling the military a “reflection” of the U.S. population — he said the presence of military personnel and veterans in extremist groups is something that “needs to be public.”

“It has to be discussed,” he said. “Now we’re an all-volunteer force of professionals, and they need to be held to account.”

Current and former military personnel known to have participated in the deadly storming of the Capitol include a 30-year-old psychological operations captain and a retired Air Force Reserve lieutenant colonel. The exact number of current and former service members involved in the incident remains unclear.

While active service members can practice free speech and participate in demonstrations, there are limits. They are not permitted to openly affiliate with extremist groups calling for violence, wear their uniforms or openly advertise their military status.

“The line is pretty clear. Military members, particularly active-duty members, do not have the same First Amendment rights that ordinary citizens do,” said Victor Hansen, a former Army Judge Advocate General officer and professor at New England Law Boston. “Expressing views aggressively and making reference to taking down political leaders is really across the line.”

These restrictions extend to social media and other Internet messaging that targets groups or individuals with threats.

“The military is actively trying to identify people who are in hate groups or some of these militias and prosecuted some for their social media speech for really, really bad stuff said on Facebook or SnapChat where it was clear they belonged to the military,” said Philip Cave, a former Navy judge advocate and military law expert.

Service members who participated in the Capitol invasion could face either the military or civilian justice system, with final jurisdiction based on factors including their charges and current military status. In some cases, military administrative punishments, such as separation from service, could be applied alongside civilian criminal prosecution.

“If there’s evidence that they were in any way complicit in the illegal entry of the Capitol or any of the violence in the Capitol, what would happen would be a coordination between the U.S. Attorney for the District of Columbia and the military command,” said Geoffrey Corn, a 21-year veteran of the Army and professor at the South Texas College of Law Houston. “They would decide who has the stronger interest in pursuing some type of charge.”

While former military personnel would be very unlikely to face the military justice system, it is possible, particularly in cases of long-serving career officers who have received a full retirement and are considered on “reduced duty status.”

“That’s a unique status, and a narrow group of people,” explained Hansen. “Those individuals could actually be brought back into the military and prosecuted. The rationale behind that is that they are on reduced status, still getting some pay and could be called on to active duty, so they [the military] still have jurisdiction.”

“Everybody in the country has taken notice that a retired Air Force officer was deeply involved in this,” said Corn. “But subjecting him to military law is not an option. This is because he retired from the Air Force reserves, and unlike someone who retires from active duty, a retired reservist is subject to the Uniform Code of Military Justice only if hospitalized. This is an odd provision of the military code, but Congress has drawn this distinction, and it means that criminal sanction for his role must come through civilian prosecution.”

Corn said prosecuting other military-affiliated rioters would send an important message to the public.

“I think the American people need to know that these are outliers,” he said. “Americans need to have confidence in the institution, and they can’t allow these outliers to create the perception that the military is not faithful to the core values of the nation and to our democracy.”