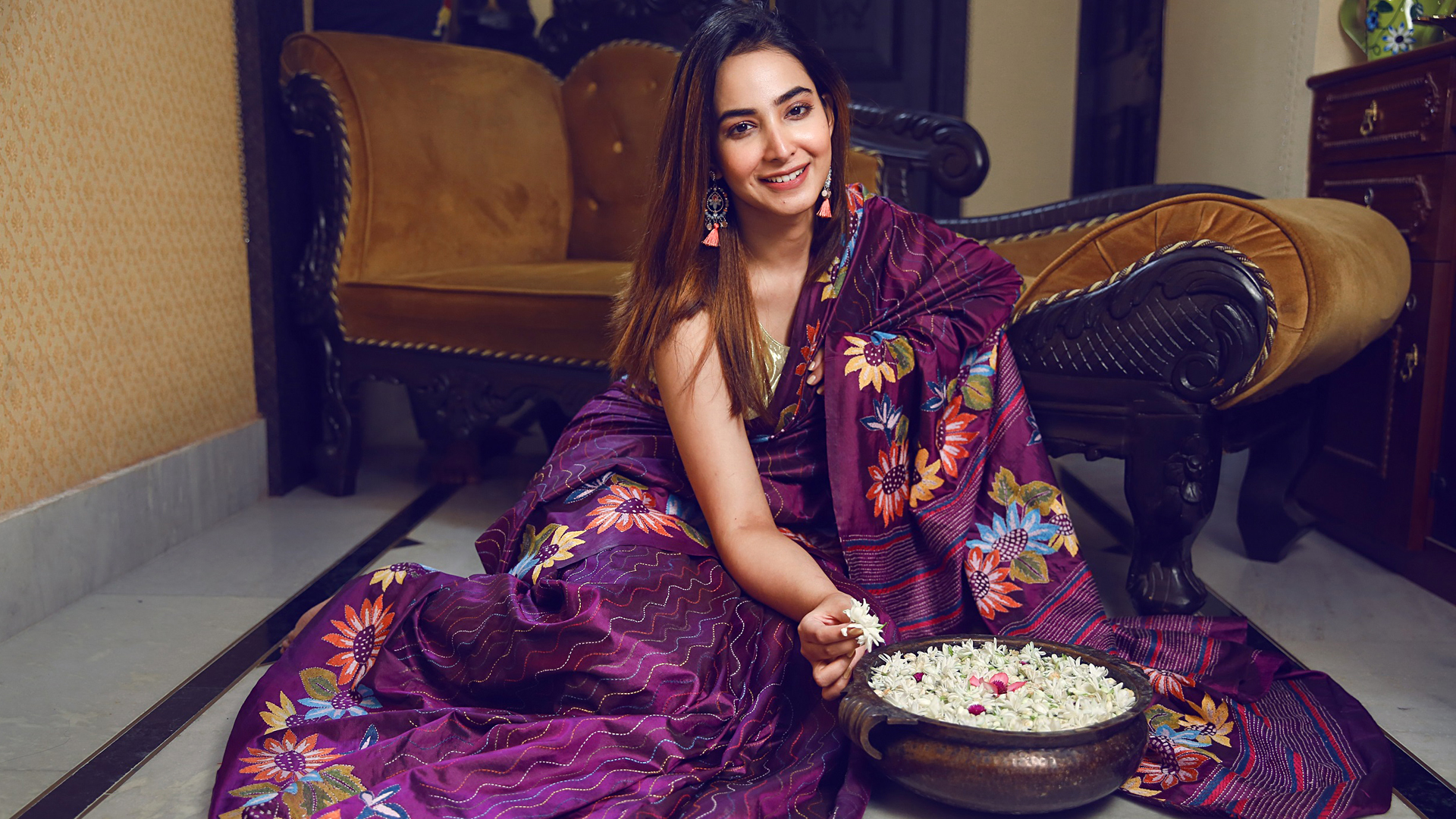 KOLKATA — Lavli Begum Sheikh has been stitching kanthas—home-made quilts made from worn out saris—in rural Bengal since the age of 10. Taught by her mother and grandmother, Lavli continued making kanthas at her in-laws’ house after getting married at 14. She is 45 now.

“Back in the day, there was a custom of sending newly married girls to their marital homes with about 10-12 kanthas. I never gave up my learning and continued stitching them in my spare time,” she said.

Years of experience has helped Lavli acquire such finesse in kantha embroidery that at present she trains several women in her village. A resident of Nanoor in Birbhum district of West Bengal, about 160 km from state capital Kolkata, the artisan informed there are about 100 women who work with her.

The art of recycle and reuse

In Bengali homes a kantha gives warmth during the region’s mild winters and is made by stitching together three or four saris with a simple running stitch.

However, these days, Lavli and several other women from Nanoor have taken to kantha embroidery to earn a living. Nakshi kantha embroidery involves the making of elaborate motifs in colorful threads on garments like the sari, dupatta (a long scarf ) and salwar kameez (a traditional two–piece dress worn by women in South Asia) and is now considered a complex and intricate art form at par with the famed chikankari of Lucknow, which involves beautiful thread work on fabrics mostly done in white.

As Lavli shows off her products made with kantha embroidery, different hues like bright pink, blue and green stand out beautifully, especially on a black dupatta fluttering in the breeze.

A way of earning livelihood

Artisan Amina Yasmin from Nanoor has 60-70 women working under her, and they come to work at her unit after finishing their household chores. Amina explained that kantha embroidery is painstaking work as a single sari takes two to three months to be completed depending on the intricacy of the embroidery or the design.

Before recreating elaborate designs on saris and dupattas, designs have to be first drawn on a tracing paper with pencil and then perforated with needles. After that the paper is kept over the cloth pieces and ink used to imprint the motifs. The designs can be simple bird, fish and flower motifs to intricate ones inspired by the Indian epic Ramayan. A design at Lavli’s house shows Ram and Sita (the two main characters from the epic) together in white thread on a pink fabric.

Women making kantha embroidery and quilts earn enough to buy daily necessities and it makes a lot of difference in their lives.

Chandnihar, another kantha artisan at Nanoor, trains 30-35 women who earn anything between Rs 4000 to Rs 5000 (USD 54 to 68) a month. Orders are placed from all over India throughout the year.

Sunahara Khatun, who works under Lavli, has been working for six years on kantha embroidery.

“A sari often takes me four to five months to complete if the design is very intricate,” she said. “However, a simple running stitch on a quilt takes me one to two months. Most products are sold in big cities like Delhi, Bengaluru and Kolkata online.”

To help women earn a decent living, Afrunissa Begum has been running a cooperative, the Kulia Tantubay Samabay Mahila Samity, since 1987. There are 650 women associated with it.

Afrunissa, who never married and wanted to do something for women, said besides clothes, kantha embroidery is also made on bags and tops. While some women work in the trust office from 11am till 4pm, others prefer to work at home. “The building site was selected by me. The best part is that now there is ample space to impart training to women here. Those who want to learn and come from outside can also stay here which is of great help.”

From humble homes in rural Bengal, kantha has travelled to as far as Japan, thanks to Kolkata-based designer Farah Khan, who owns a store in Tokyo. Khan works on saris, stoles and scarves and uses luxurious fabrics like tussar silk for her products.

Khan has popularized kantha in countries like France and Germany through her exhibitions and shows.

“Though kantha started as a way of recycling old saris, it is not confined to that recycle story anymore. It is just not a running stitch but as special as any rich embroidery of India,” she said.

Khan rues the fact that kantha does not always get the price it deserves.

“I have done kantha exhibitions in France and Germany and opened a store in Tokyo to popularize it abroad.”

“For a few of my collections, I have worked with kantha artisans of Bengal. Kantha is purely from Bengal, but in Bihar there is a version of kantha called sujani and there is another form in Haryana called gudri.” But he is yet to work on these forms.

Bhardwaj has experimented with a modern take on the kantha in his designs.