Slip Into Something Comfortable for Winter 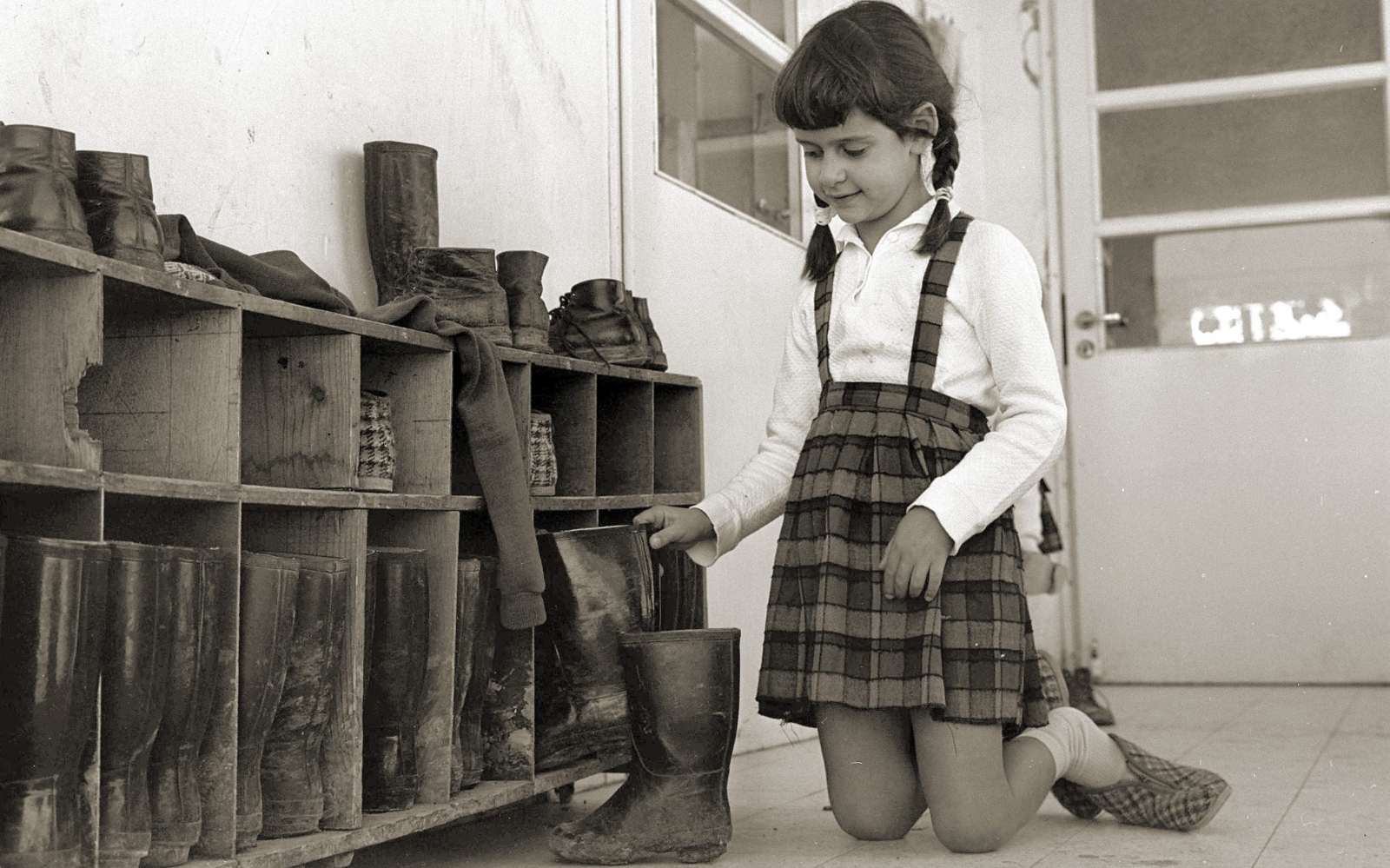 In winter on the kibbutz, the boots came off and the plaid slippers went on, to keep mud out of the house. (Photo taken in 1965 by the Government Press Office.)

Shoes can represent a culture, everything from practicality to a fashion statement.

The Hebrew term na’alei bayit translates to “house shoes.” For many years, the standard Israeli wintertime slipper was a shoe intended to be worn at home.

The classic cloth Israeli na’al bayit was (and is) plaid, ankle-high, with a front zipper closure and a hard vulcanized rubber sole, perfect for the rainy season.

For older Israelis, the shoe is emblematic of winter on the kibbutz. Boots were removed and slippers put on before entering the home, so as not to track mud inside.

For the generation of Israelis who came of age in the 1970s, the indoor shoe went outdoors. It was cool to wear the zippered plaid high-tops around the college campus, at the local café, or even onstage, as did roc

For a still younger set, the slipper is reminiscent of “Rehov Sumsum,” the Hebrew language version of “Sesame Street,” where beloved giant hedgehog Kippi Ben-Kippod shuffled about in tartan na’alei bayit.

All of which begs the question: How did a plaid slipper become the Israeli sabra’s de rigueur winter footwear?

Israel’s original and largest manufacturer of na’alei bayit was Haifa-based Hamgaper, established as a cooperative in 1935, which supplied the British Army with rubber tires and rubber-soled footwear during the Mandate period.

In the 1940s, after having been acquired by Histadrut-run construction company Solel Boneh, Hamgaper began manufacturing hiking boots and slippers, using a method that enabled cloth, leather and rubber to be fused seamlessly without stitching. Initially, the Hamgaper slippers did not have a zipper; this refinement would come decades later.

Hamgaper wasn’t alone. Only a few years earlier, in 1932, Finnish rubber company Suomen Kumitehdas Oy (later Nokian Footwear Oy) began manufacturing a tartan high-top slipper. The “Reino” and its low-cut companion “Aino” became as ubiquitous in Finland as Hamgaper was in Israel. In Canada, locally made “Arctics” slippers were made first with a buckle closure and, in due time, with a zipper.

In 1964, Kibbutz Dafna in the Upper Galilee established the Dafna Shoe Company as a manufacturer of work boots, plastic sandals and plaid bedroom slippers, which by now were standard indoor winter footwear for kibbutz children.

The dull brown tartan slippers, whether made by Hamgaper or Dafna, were very hip in mid-to-late 1970s Israel.

The phenomenon was described in Haaretz: “Hamgaper’s ads promised us that we’d feel at home in their shoes, but many who wanted the ‘laid-back look’ walked around in slippers outside as well. Kibbutzniks did it first, but city dwellers jumped on the bandwagon and turned wearing Hamgaper slippers into one of the most visible indicators of Israel’s youth.”

But with the economic reforms of the 1980s, Hamgaper struggled in the face of cheaper, more available imports. Following its acquisition by Koor, Hamgaper attempted a rebrand between 1984 and 1987, only to close in 1991.

In 2009, Dafna was acquired by Teva Naot, one of Israel’s most successful exporters, which had a talent for transforming utilitarian items into cool objects of desire, such as its success with both bible sandals and clogs.

Despite the launch of a gray plaid version, the house-shoes continued to decline in popularity among Israelis as imports, such as Australian UGG boots, gained ground.

In 2014, Teva Naot and Dafna were acquired by their New York-based shoe distributor Yaleet Corp.

In 2015, the British press reported that UK slipper sales had fallen by 72%, compared with the previous year. The drop was blamed on climate change, carpeting and underfloor heating. That same year in Finland, PK Kappi declared bankruptcy.

However, Reino and Aino were rescued by the Finlayson textile company, which acquired the branding rights to the booties — to this day, still zipper-less.

Trend-spotting Teva Naot took a page from the Finn playbook and in 2018 launched a bright pink version, accompanied by an advertising campaign touting the nostalgic value of “Kippy” shoes.

While it once looked like good old na’alei bayit were being relegated to Israeli fashion history, the tartan booties are still here. Israelis love them too much to let them fade away.

If it’s wintertime, Israelis will be wearing slippers appeared first on ISRAEL21c.