René Escobar Jr. From Panama to Canada to Actor Of The Year

Escobar Jr. is a co-star on Hallmark Channel’s Heart of the Holidays.
By Bel Hernandez January 15, 2021
Facebook
Twitter
Linkedin
Email 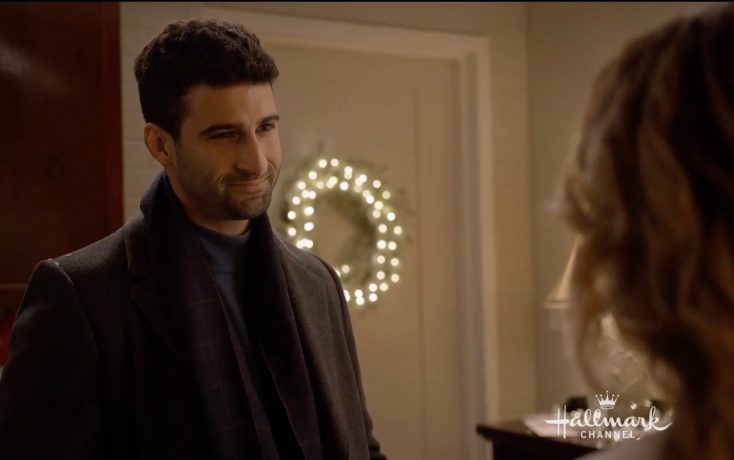 Rene Escobar Jr. as Will in Heart of the Holidays. *** René Escobar como Will en Heart of Holidays. (Hallmark)

Most recently, he co-starred along with Vanessa Lengies in “Heart of the Holidays,” one of the Hallmark Channel’s 2020 Christmas movies. In this film, he plays the boss of a career-driven woman coming home for the holidays.

Born in Ajax, Ontario Escobar Jr. and his family relocated numerous times in his childhood. For a few years, he lived in Austin, Texas, before settling in Markham, Ontario during his teen years.

After recently being nominated for “Actor of the Year” for the Canada Latin Awards, Escobar Jr. gave the following exclusive interview.

Congratulations, Rene! What a wonderful honor to be recognized for your talent! How excited are you?

This nomination means the world to me. Anytime I can get on a WhatsApp video call and give my family back in Panama some good news, I couldn’t be more grateful for that. If I win, that’s just a bonus at this point. This nomination is something tangible, something physical that symbolizes that I’m going in the right direction as an actor. That is a luxury that scarcely presents itself. I think to myself — to have been on welfare just two years ago and now receive this nomination. Life is a mystery!

We read that your first career aspiration was to seek a criminal lawyer career, but you switched to acting.

I don’t think there was ever a switch. I always had it in my mind that I wanted to be an actor, but I never really had the avenues to pursue it. During my second year of university, a strike took place, and students were locked out for three months. This was when I told my dad that I wanted to drop out of school and drive to L.A. to become an actor. However, he was adamant that I could do whatever I wanted after I graduated. After that, things got relatively serious acting-wise.

Your family fled Panama because of Manuel Noriega’s dictatorship. Tell us a little about that experience.

My parents fled Panama to Canada in 1989 before the U.S. invasion. However, once the “coast was clear” in regards to Noriega and his regime, my family moved back to Panama. My dad was a software engineer by trade. Due to the technological boom of the 1990s, he was constantly relocated. That’s what led us back to Toronto, where I spoke zero English. However, it didn’t take long — during my first and second grades — to become fluent in English. Then my family was relocated to Austin, Texas. Texas was dope. It was the first place where I lived with a really big Latino population (predominantly Mexican), and I loved every minute of it.

As a Canadian-Panamanian, is growing up Latino in Canada different than it is in the U.S.?

This is such an amazing question; there are massive differences! There are so many more Latinos in the U.S. than there are in Canada. Toronto prides itself on being Canada’s most multicultural city, but it doesn’t have a big Latino population.

In Austin, I spoke Spanish every day, with my friends, at different events, at different stores. In Toronto, I can’t quite say when was the last time I spoke Spanish to someone. I realized that very early on in my Toronto days. So, I really go out of my way to blast my music in Spanish and connect with as many Latinos as I can.

Congratulations on Hallmark’s “Heart of the Holidays!” I couldn’t figure out if you were Middle Eastern, Italian or Latino. Tell us about the audition process to book the role of Will.

Thank you! Well, you’re not alone. It’s no secret that I don’t look like the regular Latino.

The casting process in this movie was unique, and it cemented the notion that, if a role is for you, it’s for you. I had auditioned maybe 15 different times for this casting director and never booked anything. Then, my agent calls me and tells me that I received a direct offer for Will’s role in the Hallmark movie. A direct offer means exactly that: you don’t audition; you’re just offered the role.

Later on set, I spoke to Corey Sevier, who not only directed the Hallmark movie but was also the male lead. He told me that once he saw my demo reel, he knew I was the guy. This process taught me that you would get the roles you’re meant to get. Everything else is out of your control.

How different was booking this holiday movie gig from your other TV roles (“Imposters,” “Jack Ryan,” “Taken,” “Mayday,” “Air Emergency”)?

The casting process was completely different for these roles. I had to audition for each of those roles, and I was fortunate to book them. These are what we call “day players.” The auditions didn’t take longer than three minutes, so I had to make sure I did my homework and prepare well because I didn’t have the luxury of a character arc. These roles really establish the notion of professionalism on set — meaning, I go to work, I do my job and I go home.

How challenging has it been as an actor, especially this past year, during the COVID-19 shutdown of productions?

In my personal experience, COVID-19 has been a double-edged sword. Financially, it was a nightmare. I was working at a restaurant, and that industry was instantly eradicated. I didn’t have anything lined up on the acting front either. It took a serious toll on my mental health as well, and all the existential questions spawned in my head. At the same time, this depression stemmed into working on myself, taking this time to be prepared when things reopened.

Up next for Escobar Jr., he will appear in the indie psychological thriller “Neon Lights” as ex-con bully Benny Amani alongside Kim Coates (“Sons of Anarchy”). He is also slated to work on “Far Cry 6” (Ubisoft’s most successful video game franchise), starring Giancarlo Esposito as Yara’s evil dictator.

The post René Escobar Jr. From Panama to Canada to Actor Of The Year first appeared on LatinHeat Entertainment.