Ishrat Akhter: Blazing a Trail on a Wheelchair 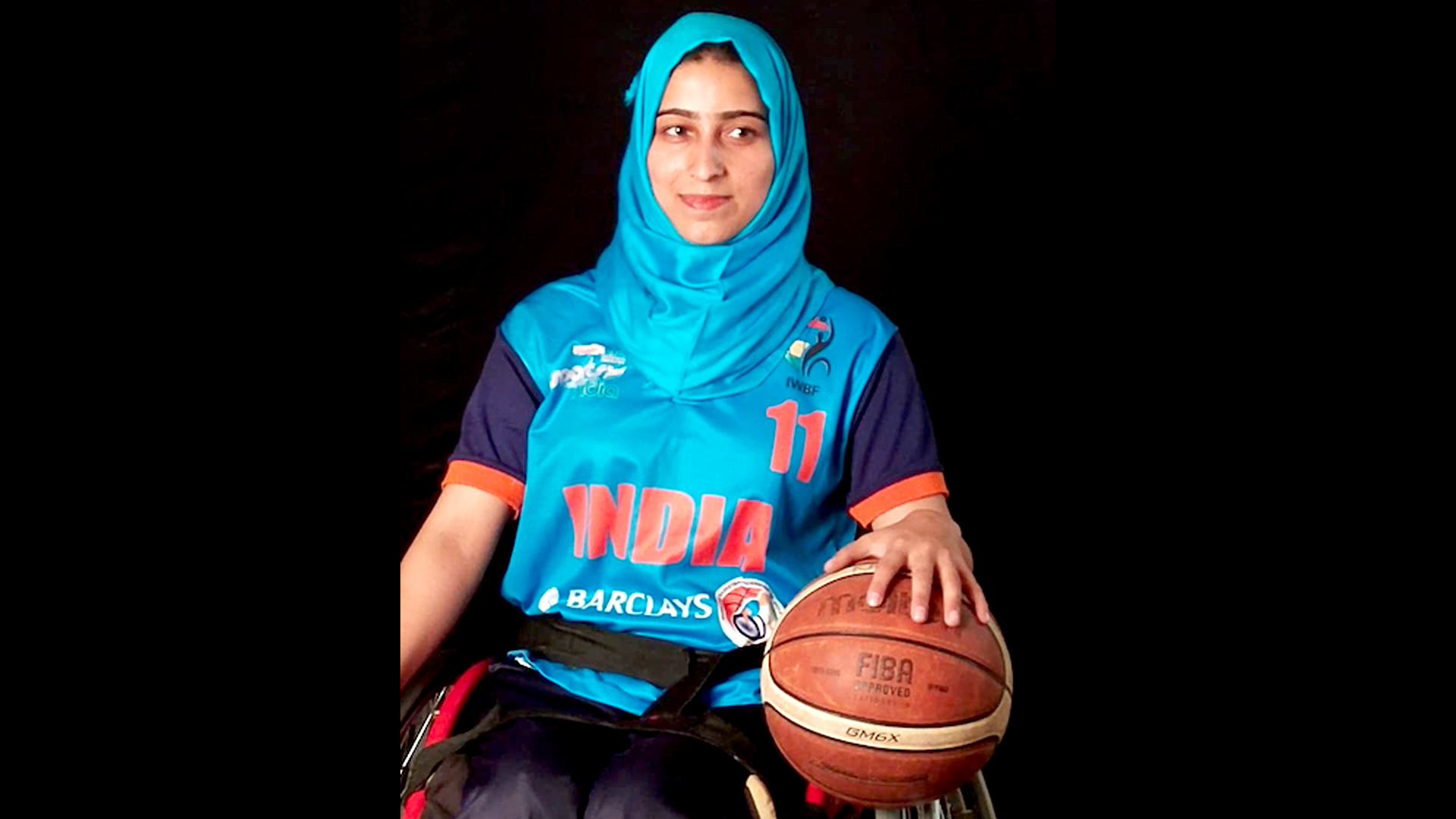 SRINAGAR — Ishrat Akhter, a 24-year-old from Kashmir’s Baramullah district is the state’s first international wheelchair basketball player. The athlete who represented India at the Asia-Oceania Wheelchair Basketball Championship in Thailand (a Tokyo 2020 Paralympics qualifier) is training hard to get a gold medal at the event that is now slated for July 23 to August 8, 2021.

But Akhter wasn’t always wheelchair-bound or a basketball player.

In 2016, when Akhter was 19, she jumped from the second floor balcony of her house in a panic.

That year, clashes between locals and security forces were rife across the Kashmir valley after militant commander Burhan Wani was killed. Wani is credited with reviving the militant movement that started in the early 90s in Jammu and Kashmir. India and Pakistan both claim the region but control only a part of it.

Wani was killed in an encounter on July 8, 2016 and protests and shutdowns followed his killing. In one such clash in Bangdara village (Akhter’s hometown) on August 24, a group of alleged “stone-pelters,” who were being chased by security personneI, stormed into Akhter’s house and hid themselves there.

“When the security forces entered my house looking for the protestors, I got scared and jumped off of a ledge on the second floor and injured my spinal cord,” said Akhter. “I was 19 and the consequences of my actions was the last thing on my mind at that moment of panic. I should have stood there and not jumped.”

She was taken to the Associated Hospital, Government Medical College Baramullah first and then referred to the Bone and Joint Specialty Hospital, Barzulla, Srinagar, where she was operated upon after three days.

“I was told that I would never walk again,” said Akhter. “When I was discharged from the hospital and taken back home, people behaved as if I was a dead body. My homecoming felt like a funeral.

Akhter was bed-ridden for the next six months before she was allowed to move on a wheelchair.

“She was so depressed that I started to take her to the Voluntary Medicare Society, Srinagar, a rehabilitation centre that helps the physically and mentally challenged,” said Akhter’s father Abdul Rashid, who works in the Public Health Engineering Department. “I thought she’d feel better when she met other people in the same predicament as hers.”

One evening at the Society, Akhter saw some boys playing Wheelchair Basketball and was interested immediately.

“I thought if they could do it, why couldn’t I? So I started practicing with them every day,” she said. “The boys told me about a camp that was going to be held for differently-abled basketball players at Srinagar Indoor Stadium.”

“Before this I had never played basketball and didn’t even know the rules of the game. But I practiced hard for the three-day camp.”

At the camp, she was the only girl from Kashmir who was selected for the Nationals.

“I had full family support. Most days, my father would take me to Srinagar by bus for training, which would take almost two hours. On other days, I would travel with my brother-in-law on his bike,” says Akhter.

In August 2019, the Central Government of India removed Jammu and Kashmir’s “Special Status” by abrogating Article 370 that gave the state the power to have a separate flag, constitution and autonomy over internal administration. Heavy communication restrictions were imposed and phones were shut and the Internet suspended. Large number of troops were deployed everywhere.

During this communication blockade, Akhter was selected for a national camp in Chennai.But she had no idea about it because the Wheelchair Basketball Federation of India (WBFI) could not get in touch with her.

On August 25 (20 days after Article 370 was revoked), the coach of the Indian women’s wheelchair basketball team, Captain Louis George Meprath was talking to one of his friends, a retired intelligence officer

“I told him casually that we were having trouble in getting touch with one of our players; I didn’t even have Akhter’s proper address,” said Mephrath.

The friend used his resources and informed the Jammu and Kashmir Police in Srinagar and the Indian Army about Akhter, who was traced in no time.

On August 26, there was a knock on the door of Akhter’s house…almost a rerun of that fateful night four years ago. When Akhter’s father Rashid opened the door, he saw a few Indian Army soldiers with a photo of her daughter. He was scared.

“But the army man congratulated me and told me that my daughter had been selected to attend the Indian Camp at Chennai. I hugged Ishrat and we both cried,” said Rashid.

The police and the Army helped Akhter reach Chennai just in time. At the end of the camp she made the cut for the Asia-Oceania Wheelchair Basketball Championship in Thailand that was going to be played later that year.

The Thailand trip changed everything for Akhter and her family.

She was felicitated by the Minister for Communications, Electronics & Information Technology and Law and Justice of India, Ravi Shankar Prasad and started getting invitations to deliver motivational speeches.

“The way people listen to my speeches motivates me further. I practice even harder, and I am now eyeing the Paralympics which has been postponed due to Covid-19” she says. Akhter has also resumed her studies after a gap of four years.