The American paid a record $80,000 to hunt the markhor, a kind of wild goat 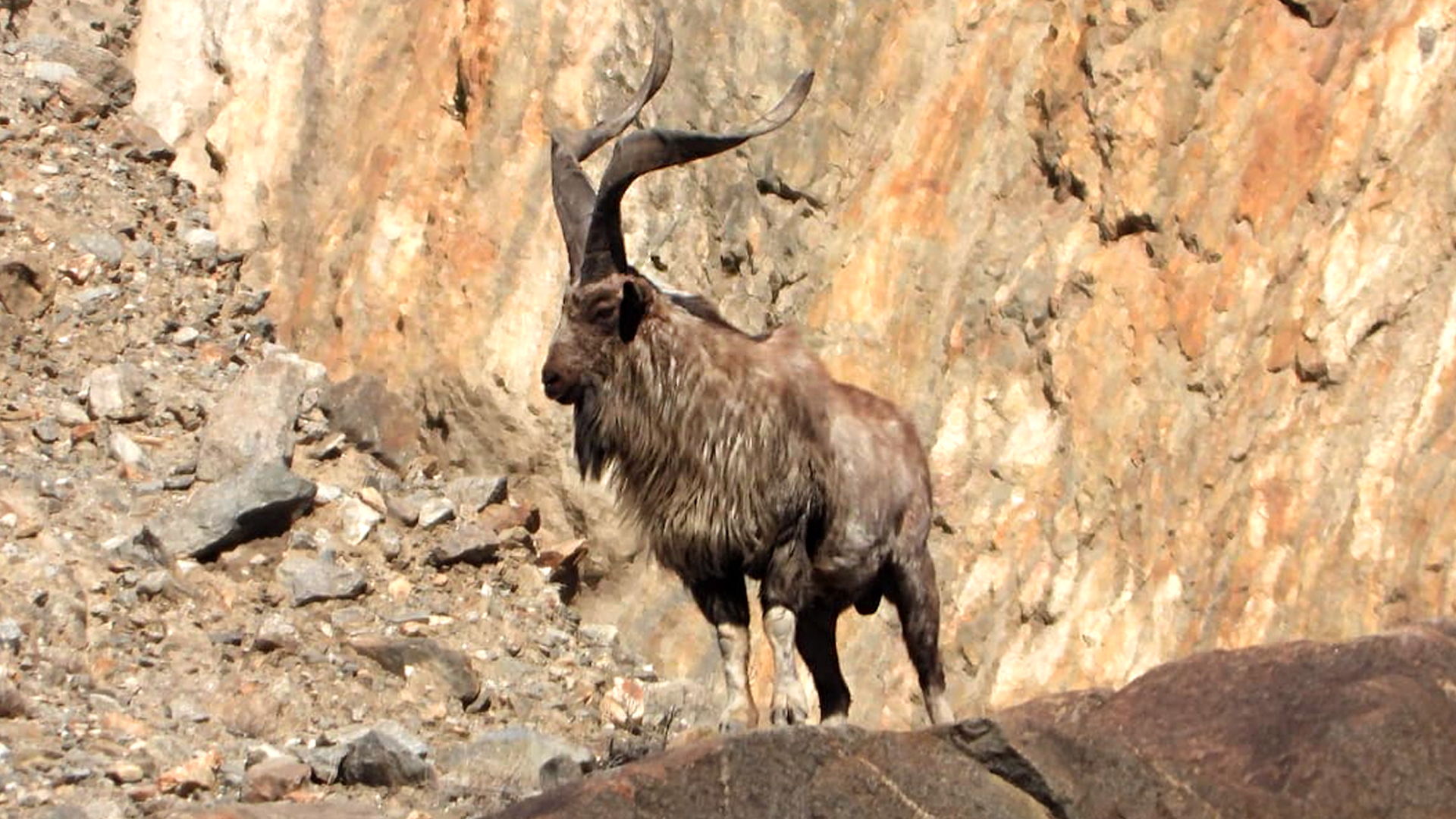 The Astor markhor or flare-horned markhor is a subspecies of the markhor, native to Kashmir and northern Pakistan. (Mujeeb Sardar)

GILGIT-BALTISTAN — An American hunter has created a record by hunting Markhor, Pakistan’s national animal, with an arrow. Joseph Bradford paid $80,000 to hunt down the wild goat, known to have beautiful coiled horns, at Tooshi-Shasha Conservancy in Chitral, Khyber Pakhtunkhwa.

“This is the first time that trophy hunting was performed with an arrow,” said Dr. Mohsin Farooq, Chief Conservator Wildlife Khyber Pakhtunkhwa. “Bradford had to position himself as close to the markhor as possible as he was using a bow to hunt. He succeeded in killing the markhor, which had 40-inch horns, on the second attempt on the sixth day of his expedition.”

Markhor hunting has been popular since the days of British rule. Hunting drove the animal to the brink of extinction and the Pakistan government had to place a ban in the 1990s. This helped the markhor population grow. However, the animal is still listed as near threatened by the International Union for Conservation of Nature (IUCN).

Pakistan later replaced the ban with a trophy hunting scheme. Every year, eight licenses are issued by the government of Khyber Pakhtunkhwa and four by Gilgit-Baltistan (GB).

Markhors are found in Afghanistan, India, Pakistan, Tajikistan, Turkmenistan, and Uzbekistan. In Pakistan, they are found in GB, in the valleys of Chitral, Kalash. In Khyber Pakhtunkhwa, there are four hunting areas — Tooshi-Shasha, Ghehrait-Goleen in Chitral, Mankial Valley in Swat, and Kaigah Valley in Kohistan.

According to this program, 80 percent of the trophy hunting earnings go to the local community and the remaining goes to the national exchequer. Under this model, Village Conservation Committees (VCCs) were established in Khyber Pakhtunkhwa and GB.

“They are bound to spend 50 percent of the amount on social development and another 20 percent on habitat development,” Zakir Hussain, Chief Conservator of Wildlife for GB, said. “This way, they feel ownership of the wildlife in their areas. And, this ownership has helped increase the population of markhors in GB.”

“Markhor was just a large goat for the locals, but now it is a goat worth millions,” Hussain said.

Several guidelines have to be followed preceding a hunt, Mujeeb Sardar, Divisional Forest Officer, GB, said. “A female is not to be hunted and neither her young. Only an animal that is male, has become infertile, or is in danger of falling prey due to old age or immobility may be hunted,” Sardar said.

Sardar said that each hunter is assisted by VCC members.

“The community does recce before the hunting season starts,” he said. “They spot and track animals fit for hunting according to the guidelines. They guide the hunters to the spot where the selected markhors were last seen.”

The local community knows which one is a female and as far as males are concerned their age can be gauged by the length of their horns, he said. “This way the hunters are only guided to the markhors falling under the hunting guidelines,” he said.

So far, no hunter has arrived in GB and made a successful kill, Sardar said. However, in Khyber Pakhtunkhwa, it was the first kill of the season. Hunting season is from November to February when markhors come down from 8,000-11,000 feet to 5,000 feet, Sardar said.

“The funds given to the VCCs are used to build schools, install solar panels, girls’ hostels, and to give scholarships, among other things,” Sardar said. “Villagers wait all year for the hunting season so that money starts coming in.”

However, some others argue that hunting should be banned and that the responsibility of developing the Khyber Pakhtunkhwa and GB regions rests on the state.

In February 2019, American hunter Bryan Kinsel Harlan paid $110,000 to hunt a markhor in GB. After a successful hunt, he could be seen in a video talking about how safe and hospitable Pakistan is. But he was criticized on social media.

Rab Nawaz, Senior Director Biodiversity of the World Wildlife Fund (WWF), said that the WWF is opposed to any hunting that threatens species survival, or the hunting of an animal solely as a trophy.

“I do think a diverse approach should be adopted by wildlife managers and local communities. Trophy hunting should not be the end-all or the only source of income for remote communities. New and sustainable sources of income such as eco-tourism need to be thought about.”

Pakistan also allows the rich royal families of the Gulf states to hunt internationally-protected houbara bustards in Sindh, Balochistan, and Punjab. Pakistan’s Supreme Court in 2016 lifted the ban on hunting houbara bustards. The government had asked the court to review the ban, saying it harmed relations with Arab states. Though shooting the birds is banned in Pakistan, the government takes in large amounts of money for special permits it issues. The fee is reported to be as much as $100,000 for a 10-day hunting period for a maximum of 100 bustards.