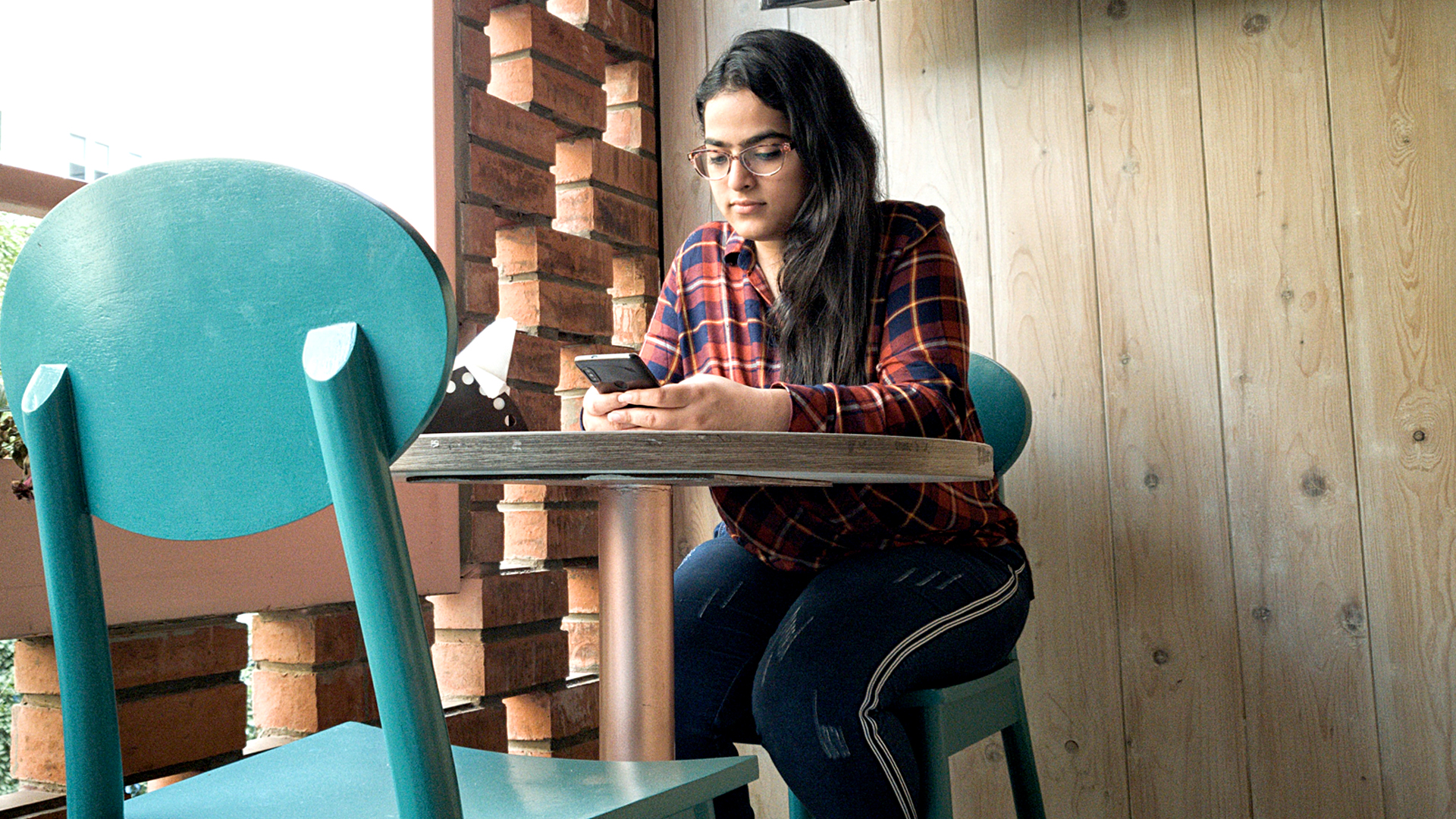 Many Indian are concerned about how WhatsApp might be using their metadata, and are migrating to competing messaging apps. (Praveen Gupta/Unsplash)

MUMBAI, India — Radio producer Shirshendu Banerjee woke up to a notification on WhatsApp one day in the second week of January, informing him about changes to the messaging app’s privacy policy, and that there would be deeper integration between WhatsApp and its parent company, Facebook.

Banerjee accepted WhatsApp’s new terms. On the same day, he noticed a conversation regarding concerns about the new policy on a WhatsApp group of Indian podcast enthusiasts.

“A lot of us are feeling sensitive about these changes as we have no idea how our data is being used,” he told Zenger News. “On the podcasting group, we discussed if we should move to Signal. Most agreed. I downloaded Signal and formed another group.”

He is now the administrator of a group of Indian podcasters on Signal, another encrypted messaging app. Within hours, most of the members in the WhatsApp group had migrated to Signal.

Banerjee has not deleted his WhatsApp account yet. “I want to wait and watch,” he said. “The situation is too dynamic.”

India is WhatsApp’s largest market, with nearly 400 million users. But over the past fortnight, some number of them, worried about how WhatsApp might be sharing their data, have moved to alternatives such as Signal and Telegram.

In 2016, WhatsApp gave its users a 30-day window to opt out of a policy that allowed it to share phone numbers, profile name and photo, status messages and mobile device information with Facebook, which bought WhatsApp for $19 billion in 2014.

“Those who did not opt out then are already sharing their metadata,” Mishi Choudhary, a technology lawyer and legal director at the Software Freedom Law Center, told Zenger News.

“But back then (2016), WhatsApp payments and integration with other services had not been completed as it has now been done,” said Choudhary. “As always, users pay with their data, (metadata in this case) for the free service.”

WhatsApp released an infographic to clarify its policies and also bought front-page advertisements in major Indian newspapers to make its policies clearer to users.

“Neither WhatsApp nor Facebook can read your messages or hear your calls with your friends, family, and co-workers on WhatsApp. Whatever you share, it stays between you. That’s because your personal messages are protected by end-to-end encryption,” it said.

“The new additions to the terms are to factor in WhatsApp’s new services, such as WhatsApp Pay and WhatsApp Business,” said Asheeta Regidi, a cyber law expert and head of fintech policy at Cashfree.

“In terms of its privacy approach as applicable to general WhatsApp users, there isn’t much that has changed. There are only perhaps a few more details than were available earlier, but the full picture on exactly what data is collected, exactly what it is used for, is not given even now. 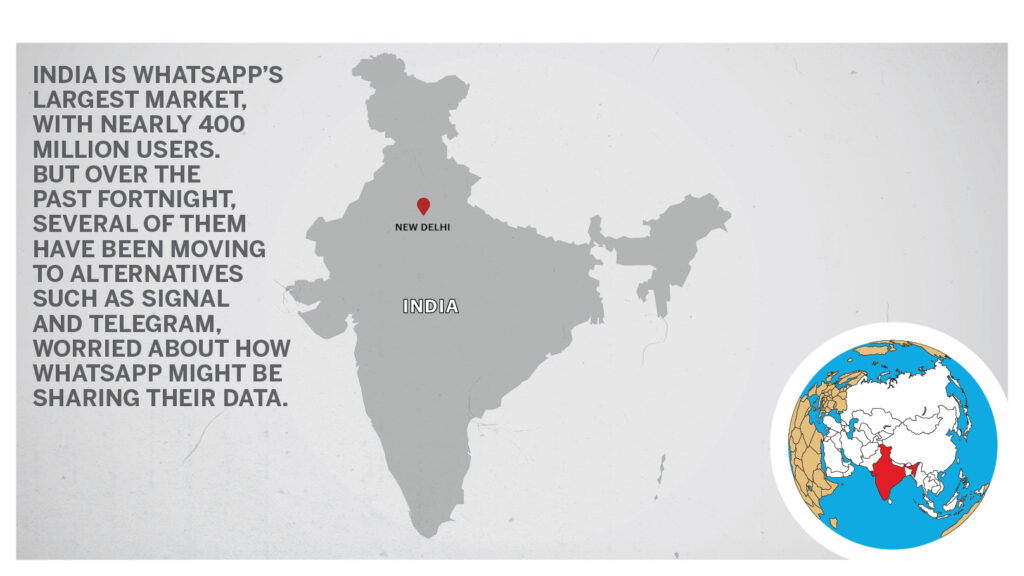 On Jan. 7, Tesla CEO Elon Musk entered the conversation, asking his 41 million followers on Twitter to use Signal, whose numbers have spiked in the fallout from WhatsApp’s policy change.

“Such behavior is not out of the ordinary,” said Amir Ghodrati, director of market insights at App Annie. “Due to the nature of social apps and how the primary functionality involves communicating with others, their growth can often move quite quickly, based on current events. We’ve seen growing demand over the last few years for encrypted messaging and apps focused on privacy.”

Signal and Telegram have seized the opportunity to tout their own policies.

“There will never be ads in Signal because your data belongs in your hands, not ours,” said a tweet from Signal.

Telegram founder Pavel Durov told his 5,000 subscribers on the app: “I am happy to save Facebook tens of millions of dollars and give away our secret for free: respect your users.”

Telegram crossed 500 million downloads with 25 million people joining over the past few days, with 38 percent from Asia.

“This reflects people’s increasing concern over privacy than any actual change,” said Regidi. “Also, it’s because of Facebook’s ill-reputation with regards to privacy. But, if all this results in bringing in better privacy laws and practices for us, it is definitely worth it.”

Sanchit Vir Gogia, founder and CEO of Greyhound Research, told Zenger News: “While upwardly mobile Indians rush to download Signal and Telegram as a second option, these apps don’t have the kind of market commitment and investments that WhatsApp has built in India over the years. The game is no longer about messaging; it’s all moving towards commerce.

“The new data policy changes are in the context of WhatsApp Business, and with WhatsApp Pay adhering to Indian norms, it will be a big play which can’t be matched by other apps.”

“There’s also a discrepancy of how people are fine with data being shared with say a Google or a telecom company, but up in arms when it’s a Facebook company,” said Gogia.

According to Gogia, Telegram and Signal are at the same stage as where WhatsApp was before it was bought by Facebook.

“Lest we forget, we are comparing WhatsApp of today to applications that are yet to establish similar territory — there is no guarantee they wouldn’t end up being another company or worse. There is no certainty in this game of data.”