Reward Offered After ‘Trump’ Etched into Huge Manatee’s Back 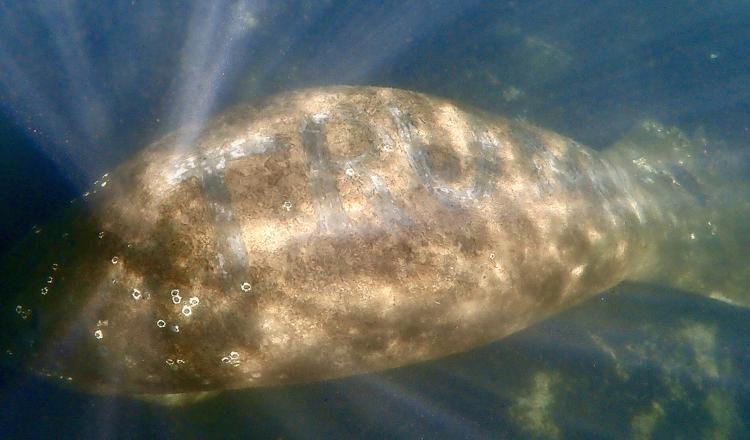 The animal had the word “Trump” scraped into its back. The USFWS is encouraging anyone with knowledge of the incident to call the Florida Fish and Wildlife Conservation Commission at 888-404-FWCC (3922). Information will be forwarded to the USFWS. (cpt_haileywarrington/Instagram)

CITRUS COUNTY, Fla. — A $5,000 reward is being offered for information leading to the conviction of whoever etched “Trump” onto a manatee’s back in Citrus County, Florida.

“The manatee does not appear to be seriously injured, as it seems that the word was written in algae on the animal’s back,” said Charles Underwood, supervisor of Operations Support & Communications at the U.S. Fish and Wildlife Service in Jacksonville, who also confirmed in a Jan. 13 email to Zenger News that the agency is investigating the matter.

The nonprofit group Center for Biological Diversity has offered the $5,000 reward “because what happened to this manatee was wrong and unlawful.

“Someone knows something, and we’re hopeful they’ll do the right thing and contact authorities,” Jaclyn Lopez, the Florida director at the center, told Zenger.

When asked how the etching may affect the manatee or if it would have a lasting impact on the animal’s health, Lopez said that is still under investigation.

However, another nonprofit, Save the Manatee, believes the incident could have long-term effects on the mammal. Based on photos and videos the group reviewed, it thinks the perpetrator could have used their fingers to scratch the algae that grows on the mammal and the top layer of the manatee’s skin.

“Manatees have tough but sensitive skin, covered with tiny, sensory hairs, so it’s possible that this action may have caused the manatee discomfort or pain,” the group said in a press release.

State and federal laws prohibit the harassment of manatees.

“Handling a manatee long enough to scrape five large letters into its back certainly falls under a disruption of natural behavior. It is clear that the offender handled the wild manatee and prevented it from escaping,” Save the Manatee said.

“The manatee who had letters scraped into its back has had its behavior changed after being handled closely by humans and is now at greater risk for injury or death,” the group said, adding that it is appalled “at this disrespectful, harmful act toward an imperiled species.”

Manatees frequently touched or handled by humans can lose their natural fear of people, Save the Manatee explained. This could lead them to approach swimmers, divers and boaters, which could put them in harm’s way.

Save the Manatee also noted that this manatee had barnacles on it, indicating it was recently in saltwater and came into the warm-water springs to seek refuge from the cooler temperatures in the Gulf of Mexico. Additionally, it may have been suffering from cold water stress, meaning the suspect in the scraping may have taken advantage of a weak or sick manatee that was unable to escape.

“West Indian manatees are essential members of the ecosystems in which they inhabit and are protected under the Endangered Species Act and the Marine Mammal Protection Act,” said Aurelia Skipwith, director of the U.S. Fish and Wildlife Service, in a press statement, adding that the federal agency is working with the Florida Fish and Wildlife Conservation Commission on the case.

“If you have any information regarding this case, please call our wildlife crime tips hotline at 1-844-397-8477 or email us at [email protected],” Skipworth said.

The agency estimates that approximately 6,300 West Indian manatees live in waters off Florida’s coast. The species, also known as the North American manatee, is listed as “Vunerable” on the International Union for Conservation of Animals’ Red List.

“My immediate reaction was to feel sadness for society,” said Lopez. “But the outpouring of support that quickly followed provided recognition that this act does not define us, and that people truly love wildlife, regardless of political affiliation.”