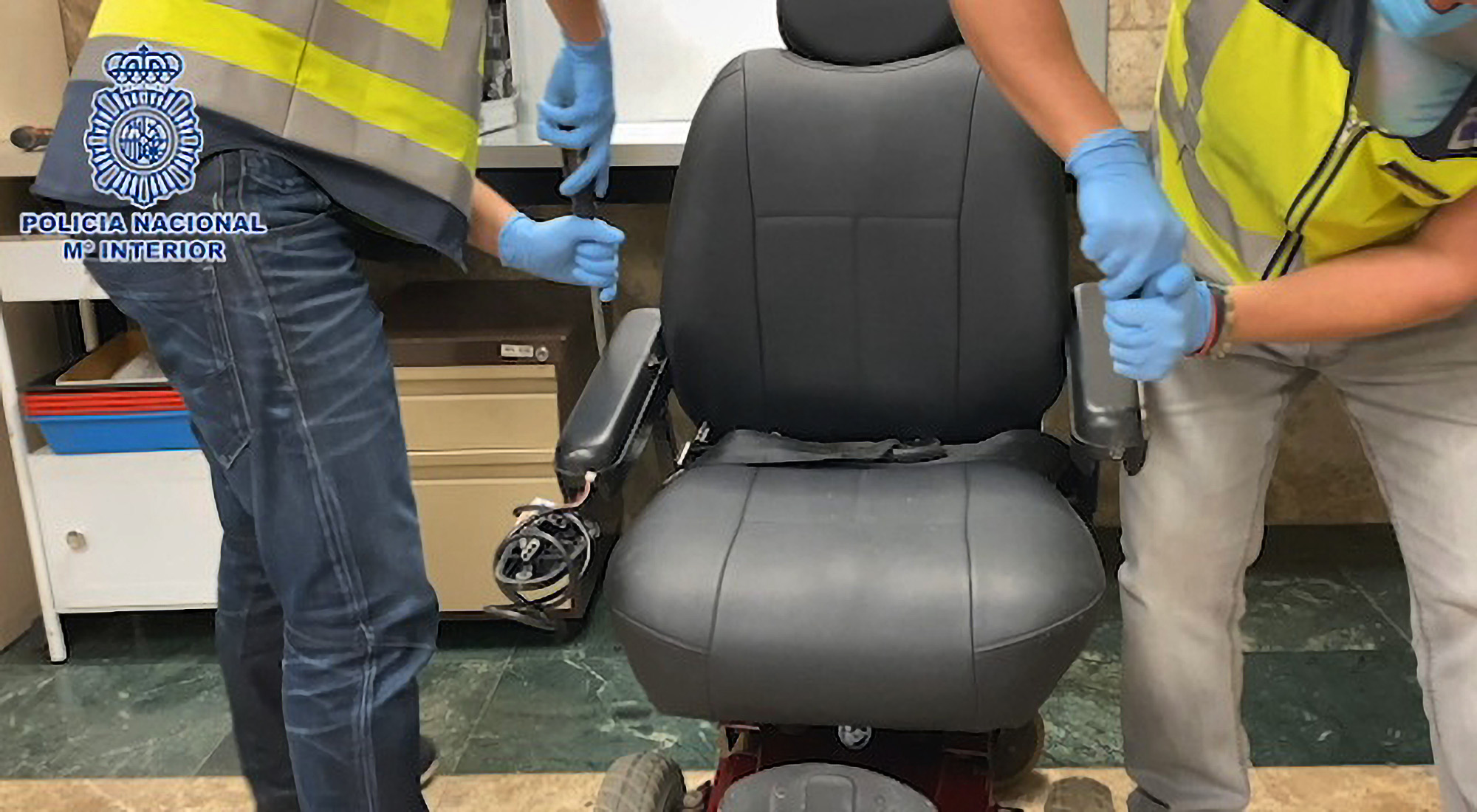 The cops destroying the wheelchair and finding the cocaine hidden there. (Newsflash)

Madrid, Spain — A physically challenged air passenger was arrested on Sunday for carrying cocaine after he landed at a Spanish airport.

The 55-year-old Spanish man, who was not identified, was arrested after his plane arrived at the Madrid Barajas International Airport from the Dominican Republic. The contraband was hidden in his wheelchair.

The suspect had a criminal background for fraud, illegal immigration and fake documentation, said a police spokesperson.

National police officers were checking a plane from the Dominican Republic when they got suspicious about the passenger.

The suspect was being taken in a wheelchair to an area, where people with mobility problems passed through customs when the drugs were discovered, said police officials.

Officers were suspicious because the man appeared to be nervous. As they checked his electric wheelchair, they found the drug was hidden in compartments made in the wheelchair.

Video footage of the incident which was released by the polices shows officers finding the hidden compartment after breaking the wheelchair, where 10 packages of cocaine with a weight of 10 kilograms were found.

The physically challenged man was immediately arrested and was remanded in custody.

It was not known whether any charges were filed against the suspect.

The drug seizure was reported in the backdrop of reduction in drug smuggling at major European airports from the Caribbean and Latin America to Europe, states the United Nations Office on Drugs and Crime.

The United Nations Office on Drugs and Crime provides technical assistance to the member states in their fight against serious and organized crime. Especially, the Regional Programme Office in Panama, set up in June 2010, keeps a close watch on the specific and unique needs of Central America and the Caribbean so the agency can deliver coherent and effective technical aid to over issues posed by this scourge.

This office was later upgraded to the UNODC Regional Office for Central America and the Caribbean in Panama in March 2012. 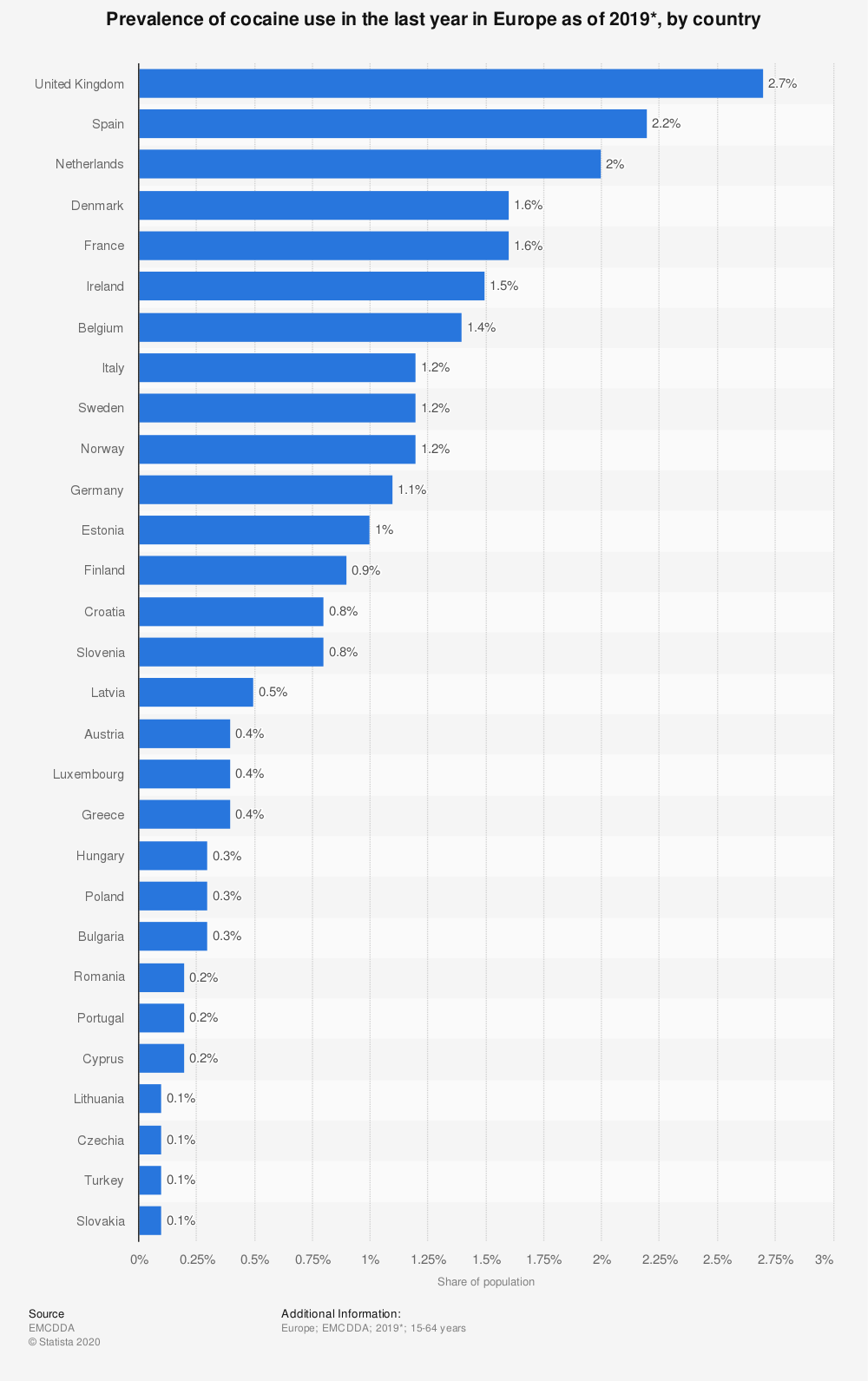 Its jurisdiction is extended to 24 countries in Central America and the Caribbean and is operational in three of the official United Nations languages (French, English, and Spanish).

“Since the project’s launch in 2010, 19 inter-service Joint Airport Interdiction Task Forces have been established, composed of officials from different law enforcement agencies, including police, customs, immigration and airport authorities, and over 2500 law enforcement officers have been trained,” said Amado Philip de Andrés, UNODC Regional Representative for Central America and the Caribbean.

“The successes have been resulted due to targeted capacity building, joint operations and the provision of equipment and communication tools as well as the commitment of national law enforcement agencies,” said Pierre Lapaque, UNODC Regional Representative for West and Central Africa.

Underlining the important work achieved by the task forces in Latin America and the Caribbean, Sergio Naranjo, AIRCOP Regional Project Coordinator for Latin America and the Caribbean said, “They have intercepted 2 tons of cocaine, 137 kilos of cannabis, 90 kilos of methamphetamines, 11 kilos of heroin, and $850,000 in cash, resulting in 424 seizures and 441 arrests, including three persons with links to terrorism who were in transit in Punta Cana heading to Europe.”

The highest number of drug seizures in Europe are reported in Spain. The Special Drug Unit of the Spanish National Police has trained most of the task forces in Latin America and the Caribbean. The Adolfo Suárez Madrid-Barajas Airport is one of two traditional entry points of cocaine into Europe. Drug seizures have been brought down by almost 50% in the past two years, mainly due to the task forces’ operations in Latin America and the Caribbean.

Moreover, the Special Drug Unit of the Spanish National Police reported an average of 380 detainees per year during 2011-2014, while the average came down to 220 per year in the past two years.

Brussels is another main entry point of cocaine into Europe. There has been a similar decrease in drug seizures by the Belgian Federal Police in flights coming from Latin America and the Caribbean. Around 90% drop in drug seizures on flights from the Dominican Republic has been seen.

Besides boosting technical capacities of the task force officials, AIRCOP addressed the challenge of a fragmented law enforcement approach by promoting regional and inter-regional cooperation in the fight against international drug syndicates.

Cocaine looks like a fine white or off-white powder and is a powerful stimulant. It is made from the coca plant leaves.

Cocaine is consumed by sniffing/snorting or injecting, which gives users a high.

Excessive use of cocaine is likely to result in convulsions, stroke, seizures, cerebral heart failure or hemorrhage.