The president spoke to reporters on the South Lawn for the first time since October as he left to inspect his border wall.
By Amanda Robert Honigfort January 13, 2021
Facebook
Twitter
Linkedin
Email 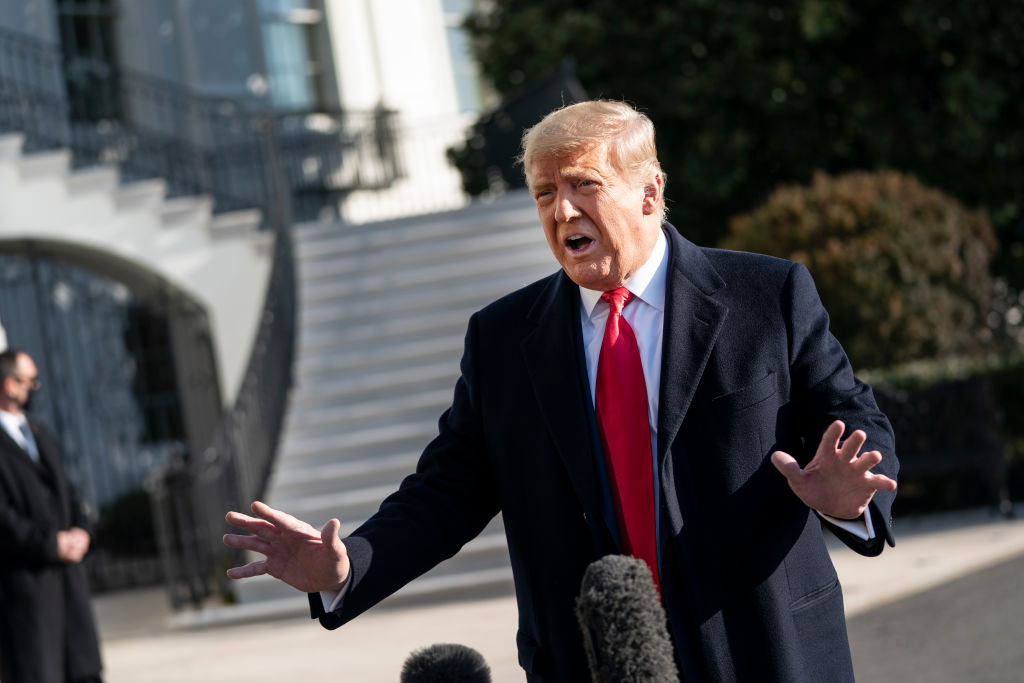 WASHINGTON — President Donald J. Trump warned congressional Democrats on Tuesday that impeaching him a second time will cause “tremendous anger” among voters who support him. Trump has drawn fierce criticism for urging thousands of his followers to march to the U.S. Capitol on Jan. 6, a move that led to a deadly riot.

Tuesday’s brief remarks on the South Lawn of the White House marked the first time the president stopped there to talk with reporters since Oct. 30, 2020. He frequently engaged in those “chopper talk” sessions during the first 45 months of his term in office.

Trump was boarding Marine One on his way to an Air Force One trip to Alamo, Texas, where he will inspect a portion of the southern border wall he campaigned on building.  Alamo’s City Commission and City Administration were not officially contacted about the visit.

The president denied any responsibility for whipping his base into a frenzy or the violent riot that Democrats have condemned as an unsuccessful “insurrection.”

“We want absolutely no violence” when President-elect Joseph R. Biden Jr. takes his place, he said, while continuing to call re-invigorated impeachment efforts “the greatest witch hunt in the history of politics.”

Federal law enforcement is tracking threats of violence in all 50 state capitals, all focused on Inauguration Day.

Appearing to speak directly to Democratic House Speaker Nancy P. Pelosi, Trump said the threatened impeachment proceedings were “causing tremendous anger, and you’re doing it.” He said the spectacle of impeaching him for inciting insurrection would cause “tremendous danger to our country.”

Instead of calming the waters in advance of Biden’s Jan. 20 inauguration, a legacy-minded Trump highlighted his efforts to curb illegal immigration.

“We’re going to the southern border. As you know we’ve completed the wall. They may want to expand it. We have the expansion underway,” he said.

The Trump administration has overseen about 450 miles of border wall construction to date, nearly all of it in places where weaker barriers existed during the presidency of Barack H. Obama. About 25 additional miles of construction are expected this month along the 1,954-mile U.S.–Mexico border. The incoming Biden administration plans to halt further construction.

But he suggested the beginning of the Biden era could give hope to Dominican, Honduran, Mexican and Salvadoran migrants who hope to make it to U.S. soil unchallenged.

“There does seem to be a surge now because people are coming up. Some caravans are starting to form because they think there’s going to be a lot in it for them if they’re able to get through, but we’re able to stop it,” Trump said.

There are reports of “caravan” groups forming in Honduras to travel together, and the number of migrants discovered attempting to cross the southern border illegally has been increasing. December’s figures show nearly 74,000 people were stopped, up 81% from a year ago. The U.S. government does not publish estimates of the amount of narcotics and other contraband border agents have seized because the wall funnels border-jumpers into smaller crossing areas.

Biden has said that in addition to stopping border wall construction, he will undo increased restrictions on legal immigration — gradually, to avoid encouraging a surge of migrants to the U.S.–Mexico border.