The Senate is in recess until Jan. 19, one day before Trump leaves office, meaning there will be no immediate trial. 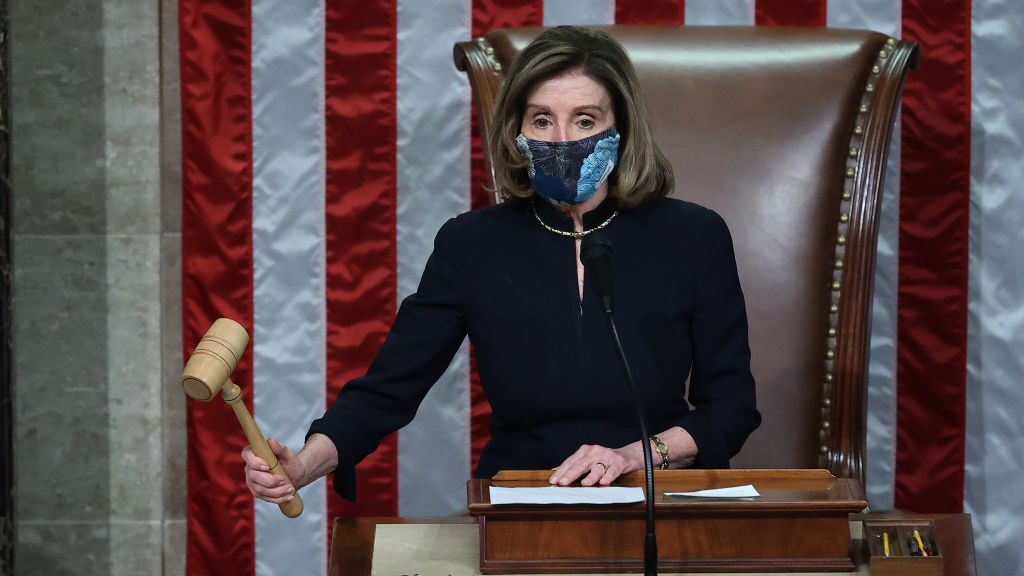 Speaker of the House Nancy Pelosi (D-CA) raps her gavel after the House voted to impeach U.S. President Donald Trump for the second time in little over a year in the House Chamber of the U.S. Capitol January 13, 2021 in Washington, DC. The House voted 232-197 to impeach Trump on the charge of “incitement of insurrection" after a mob attacked the U.S. Capitol where Congress was working to certify the Electoral College victory of President-elect Joe Biden on January 6. 10 Republicans voted to impeach. (Chip Somodevilla/Getty Images)

Donald J. Trump on Wednesday became the first twice-impeached President of the United States, with 10 members of his own party breaking ranks to join a 232–197 majority in the U.S. House of Representatives. The sole article of impeachment accused Trump of “inciting an insurrection” on Jan. 6 in Washington.

Every House Democrat voted for the impeachment, which sets Trump apart in U.S. history from presidents Bill Clinton and Andrew Johnson who suffered the indignity once. Besides the 10 Republicans who voted to impeach, four abstained.

Impeachment proceedings began Wednesday morning after Vice President Michael R. Pence rejected a Tuesday night House resolution — passed 223–205 — asking him to invoke the U.S. Constitution’s 25th Amendment and declare Trump “incapable of executing the duties of his office,” a finding that would allow him to exercise powers as acting president.

Unlike the December 2019 impeachment vote, Republicans did not universally defend the president on the House floor. A strong rebuke came from from Rep. Elizabeth L. Cheney (R-Wyo.), the third most senior House Republican. Cheney, the daughter of former Vice President Dick Cheney, said there had “never been a greater betrayal by a President of the United States.”

When Trump was last impeached, Senate Majority Leader Mitch McConnell (R-Ky.) indicated early in the saga that his Republican colleagues in the Senate would vote to acquit the president, as they ultimately did. McConnell told senators Wednesday that he was undecided and “intends to listen to the legal arguments when they are presented to the Senate.”

House Minority Leader Kevin O. McCarthy (R-Calif.), who has been closely aligned with Trump, also placed responsibility for last week’s assault on the Capitol in Trump’s lap, and said he has encouraged Trump to congratulate President-elect Joseph R. Biden Jr. on his victory.

“Let me be clear: Last week’s violent attack on the Capitol was un-Democratic, un-American and criminal. Violence is never a legitimate form of protest,” McCarthy said.

“Some say the riots were caused by Antifa,” said McCarthy, referring to a militant group on the political left. “There is absolutely no evidence of that. Conservatives should be the first to say so.”

McCarthy stopped short of supporting a second impeachment. He said he believed it would further divide the nation and impede the start of Biden’s presidency, and that while the president was at fault, he should be censured rather than impeached.

Democrats argue that impeachment is necessary — and a conviction in the U.S. Senate — to ensure Trump could never run for president again. In addition to a ban on public officeholding, a president who is impeached and convicted would lose his pension, his post-presidency office allowance and his U.S. Secret Service detail. Congress has never levied that penalty on a president.

Speaking to the entire House, Speaker Nancy P. Pelosi (D-Calif.) cited former presidents Abraham Lincoln and John F. Kennedy as she asked members to “search your souls” and show that “accountability matters.” She said Trump’s rhetoric and his Jan. 6 call to “fight like hell” led directly to the storming of the Capitol and caused five deaths.

“Since the presidential election in November, an election the president lost, he has repeatedly lied about the outcome, sowed self-serving doubt about democracy and unconstitutionally sought to influence state officials to repeal reality,” Pelosi said.

Other House Democrats dismissed the idea that Trump’s second impeachment was a partisan stunt.

“I served with Ronald Reagan, with George H.W. Bush and with George Bush,” Hoyer said. “I have respect for all of those presidents. They cared about our country. They honored our Constitution, and they executed the duties of the office consistent with the Constitution and laws of our country. That is not true of this president.”

The White House released a five-minute video message from Trump on Wednesday evening. In it, he disavowed those who participated in the Capitol “incursion.”

The president called attention to “too many riots” and “too many mobs” on both ends of America’s political spectrum in the past year, revealing that the U.S. Secret Service has briefed him on “potential threats” in the coming days. He directed Americans to “obey the instructions of law enforcement.”

McConnell, meanwhile, denied Democrats’ demands for an emergency session to begin the impeachment trial that the Constitution requires, even following a quickfire House vote.

The Senate is not expected back in session until Jan. 19, likely ensuring that Senate hearings will not begin until after Biden’s inauguration. Democrats, by then, will control the Senate. But they find their attention divided as they work to advance an ambitious slate of legislation during Biden’s first 100 days in office.