Recovering from a Broken Neck, Delvin Breaux Skipped College Football but Played in the NFL 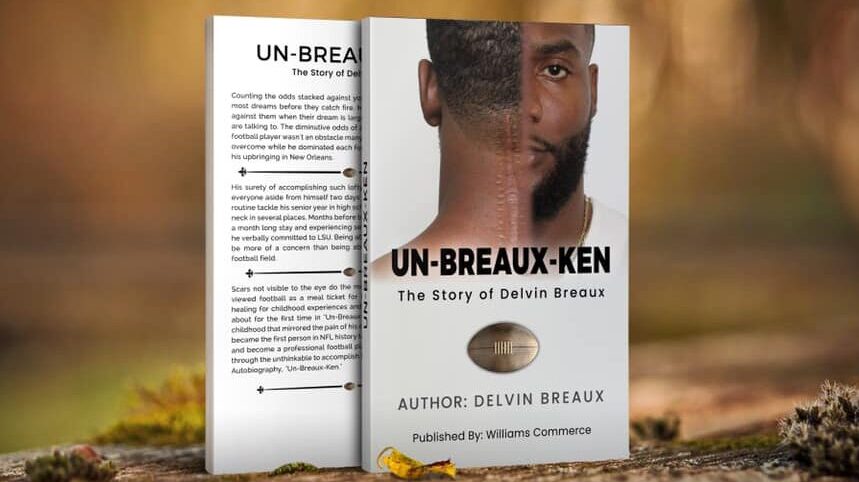 Delvin Breaux was a highly touted defensive back at McDonogh 35 Senior High School in New Orleans. He had committed to play at Louisiana State University when he broke his neck, fracturing his C4, C5 and C6 vertebrae. It derailed Breaux’s college football plans and changed the course of his entire life.

The New Orleans Saints called Breaux up in 2015, and he earned a starting cornerback spot on his hometown team. At age 31, still lives in New Orleans. Breaux shares his story in his book, “Unbreauxken,” a high-performing title on Amazon.

Zenger News talked with Breaux about his book, its potential for becoming a movie or documentary, and why he believes his story is a must-read for people who suffer or endure tragedy.

Zenger: Congratulations on the success of your book, “Unbreauxken.” You were a highly recruited football star in high school — LSU actually honored your scholarship after you broke your neck during a high school football game. Not only did you play again, but you became a starter at the cornerback position for your home team, the New Orleans Saints. What a ride, my man.

Breaux: I want to leave a positive mark on this world. I want to be a legend when I leave this motherfucker. This book had to be done. It was amazing doing this book. It was a dream come true. It’s something that I always wanted to do. When I was younger, I always wanted to tell my story. I just didn’t know it was going to be all these damn events. It’s so many events that happened in my life. But it’s awesome to be able to get it accomplished, and to get all these great reviews and congratulations from people. A lot of people telling me that it’s another big step in my career and on my journey. So, just to hear that speaks volumes, so I’m appreciative and I love every bit of it.

Zenger: In gathering information for this book, was it a matter of reliving something very painful and a dark time in your life, or was it a more vibrant feeling to be able to share your story and show where perseverance can get you?

Breaux: It was positive because I got that shit off my chest. If you would’ve caught me when I was in college and going through the shit, I wouldn’t have had the same answer. I couldn’t be more positive because everything was so negative. I saw everything in a negative light back then. I was in a dark space, man. I broke my neck, I don’t know what to do. I have all this trauma. Everything was still fucking with me mentally. I literally was dealing with PTSD. Everything was just negative. And now, I have forgiven the situation, I’m talking about it more, I wrote my book. I’ve been writing, and that’s very therapeutic. In fact, anybody going through anything: Go wrote, man. If you need to get stuff off of your chest and your mind, go write. It’s very therapeutic. It’s awesome, man. I’m very thankful.

Zenger: I couldn’t think of a more fitting title if I tried. How did you come up with “Unbreauxken?”

Breaux: I have a notebook, bruh, I kid you not. I can send you a picture. I have a notebook of titles. I wrote down a whole bunch of titles. Me and [book editor] Ross [Williams] actually came up with the picture for the cover, right? But the title … I was just thinking, man, I wanted to come up with something that included my name. When people see my book, I wanted them to be able to see my name because that’s my brand. I have “Breaux Show” as my brand. I’m branding my last name, so when they see that I want it all to tie together. It was just me being creative. I was just sitting down writing down a whole bunch of titles. I was asking a good friend of mine at the time what she thought as I’m coming up with these names. And she was like, “Wow, I like that. ‘Unbroken,’ but using your name, is pretty awesome. It’s very unique and creative.”

Breaux: Seeing a lot of other authors out there, I didn’t think it was hard. I didn’t get discouraged by it or anything. It was just like, fuck, I just gotta write a book. I just had to get somebody to help me write my thoughts down. I have so much to say; I just needed somebody to help me. So, going through that process was cool. I loved it. I actually loved it. I’m actually writing another book. This one will be about football only, and everything that happened to me in football. I have so much sports news, and people want to know what it took to get to that NFL level. Being up all night, the training process to it. I’m actually working on that for my second book. I found a love for writing during COVID. I love writing now. I never thought I would fall in love with writing, but I love writing, man.

Zenger: “Best-selling author.” How does that sound to you?

Breaux: Ah, man [laughing]. That’s amazing there, man. That’s crazy. I’m just tapping into a whole new avenue. Being a publisher, best-selling author … man. That has a nice ring to it.

Zenger: It says that a lot of people are interested in your story, and I think that in itself is awesome.

Zenger: Yes. Being so embedded in Louisiana, for you to receive a scholarship from LSU despite your injury, to make it to a starting position with the Saints, you couldn’t write a better script for a kid that played high school ball at McDonogh 35 in New Orleans.

Breaux: And I’m ready to tell it. I want this to get on a bigger stage. It’s funny you used the term script because after I read my book, I said: This should be a movie. There is no way people can read this and not envision it on a TV screen or become a documentary. I want this to get as big as God wants this to be. I have no ceiling over my head. I want to this to go as high as it can because it’s going to touch a lot of people from a lot of different backgrounds. People out here are hurting, man. So, if they get this inspirational story and message of perseverance and overcoming adversity, overcoming struggles of living with depression and everything that I was going through — drama, abuse, depression, everything. My story touches on all that.

Zenger: Dream chasing. You had a dream to reach the highest level of playing football, and nothing prevented that for you, not even a broken neck.

Zenger: You brought it up, so I gotta put you on the spot. Delvin Breaux movie: Who plays Delvin Breaux if you had your selection?

Breaux: Ah, man [laughing] … I like Aldis Hodge. He’s a really good actor. And I like Trevante Rhodes. He’s from Louisiana, so that would be dope. I can see those guys, but to keep it real, P, I want a young actor who is on the come up. Maybe even someone not quite discovered yet. That would be ideal for me. Those guys’ faces been there. I want somebody that needs to get their face on the screen to play this role to get their face out there. I want that person, whoever it is. Whoever God put in that spot.

Zenger: Would you prefer a documentary or a biopic?

Breaux: You know what? I want both. We can do whatever with my story, right? Personally, a motion picture … growing up seeing things in a motion picture was always big. Seeing the Disney thing go across the screen meant something. I always thought seeing Lionsgate go across the screen was pretty cool. Warner Bros. — I always envisioned that. But where we are at right now, documentaries and being on Netflix or Hulu is where it’s at. I gotta think logically and where things are poppin’ at right now, and honestly, that’s probably some form of streaming service — Netflix, Hulu or Amazon Prime.

Zenger: Dr. Miguel Melgar — the reason I know that name is because you always give him his just due and props for getting you back on the football field. I love that you always mention him.

Breaux: That’s my guardian angel. You got me with chills right now, man. That’s my guy. He’s my miracle doctor. He saved me, man. I can’t do nothing but show thanks to him and his staff. I want to meet up with him. I don’t know if he’s still in Mississippi at the Gulf Coast Hospital out there, but I have to call over there, man. It’s been too damn long.

Zenger: Amazing story. Congratulations again on being on the best-seller list for new releases, and continued success, brother. Is there anything else you would like to add?