Freeze! Snow Way Are You Getting Away on That 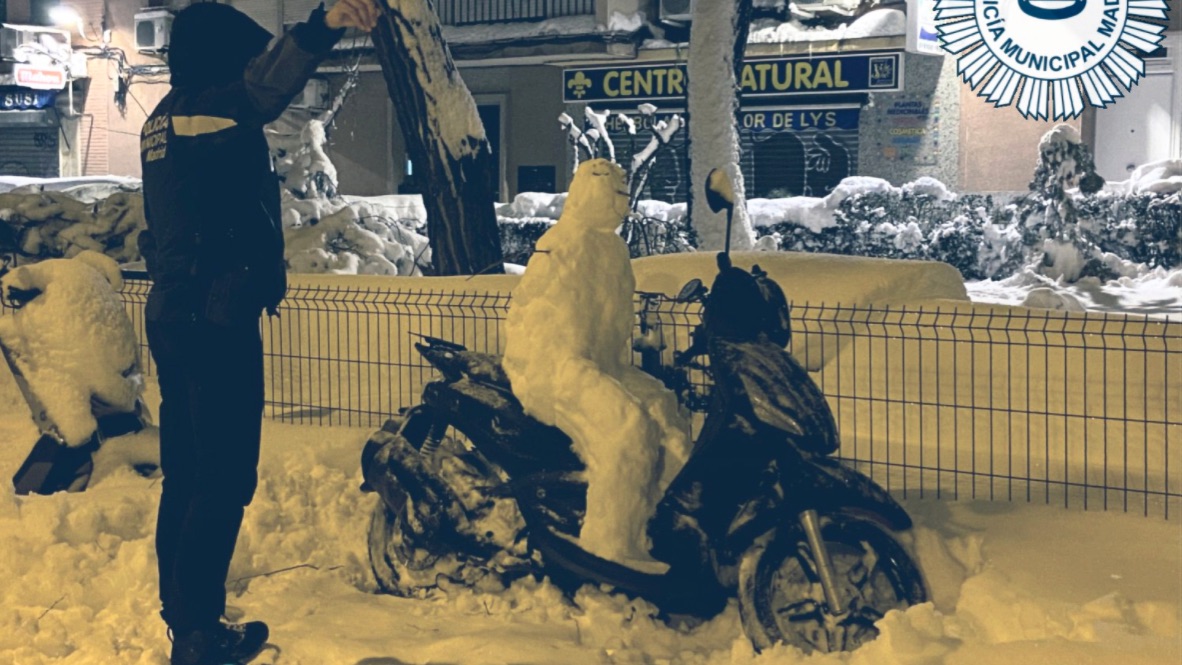 Police fined the snowman on board of the motorbike. (@policiademadrid/Newsflash)

Madrid, Spain — The Spanish police have released a photo, in which a Spanish cop is seen issuing a fine to a ‘snowman’ on a motorbike for failing to wear a helmet and not using chains on the wheels during the crippling Storm Filomena.

“Despite warnings, some people never learn,” stated the message, shared along with the picture. “The motorbike owner was fined for riding without a helmet and mandatory wheel chains. ‘You have left me frozen’, he told the police.”

The police have found many people venturing out defying norms despite warnings in an exceptional snowfall in Spain.

The Madrid police shared the lighthearted photo on social media on Sunday to remind residents to stay at home as the authorities deal with the unusually high snowfall this winter.

The image shows a cop fining a snowman on a motorbike for not having chains on his wheels or a helmet on his head.

“Seriously, please stay at home. Snow mounds are turning into ice, also on the reopened roads. If you need to travel, please use the tube or chains or winter tyres,” stated the police in another message related to warnings.

The metro was the only public transport available in Madrid over the weekend as most of the streets were full of snow.

The storm in Madrid has brought exceptional levels of snow. It is believed that the cold temperatures will continue this week.

The cold front will continue to affect central Spain with minimum temperatures of around -8 degrees Celsius, stated the AEMET State Meteorological Agency.

Snow ploughs are being used to clear the roads, while 3,500 tons of salt was supposed to arrive on Monday in 90 trucks to help prevent accidents.

“A cold wave would sweep wide areas of the interior of the Spanish peninsula from Monday (Jan 11),” said the meteorological agency in a special notice regarding the adverse weather condition. “This weather is likely to continue till Thursday (Jan 14), though the Storm Filomena is moving further towards the eastern Mediterranean.”

The Storm Filomena has caused a record snowfall in central, eastern and northern parts of Spain for the first time since 1970. Madrid recorded 40 cm of snowfall. Flash floods were reported in southern parts of the country with 300 mm of rain.

Half of Spain was on red alert on Jan 9. Rail, road, and air traffic remained disrupted. “Spain was facing the most intense storm in the last 50 years,” said Interior Minister Fernando Grande-Marlaska.

Four persons died due to the adverse weather condition. Two people were frozen to death — one in Zarzalejo town, near Madrid, while the other in Calatayud, the eastern city. Two drowned in flash floods near Malaga, the southern city, officials said.

“The most significant aspect of the meteorological phenomenon is the progressive penetration of the Atlantic anticyclone in Spain, which would remain concentrated as of early Tuesday morning in the western half of the peninsula,” said the country’s weather agency.

“The presence of the anticyclone is stabilizing the weather, with increasingly clear skies and light and even calm winds. As a result, there would be a sharp drop in night temperatures, with widespread freezing conditions in the interior of the peninsula.”