Founded in 1809, a burial ground served all Georgetowners until a “whites only” graveyard was established 40 years later.
By Kevin Michael Briscoe January 13, 2021
Facebook
Twitter
Linkedin
Email 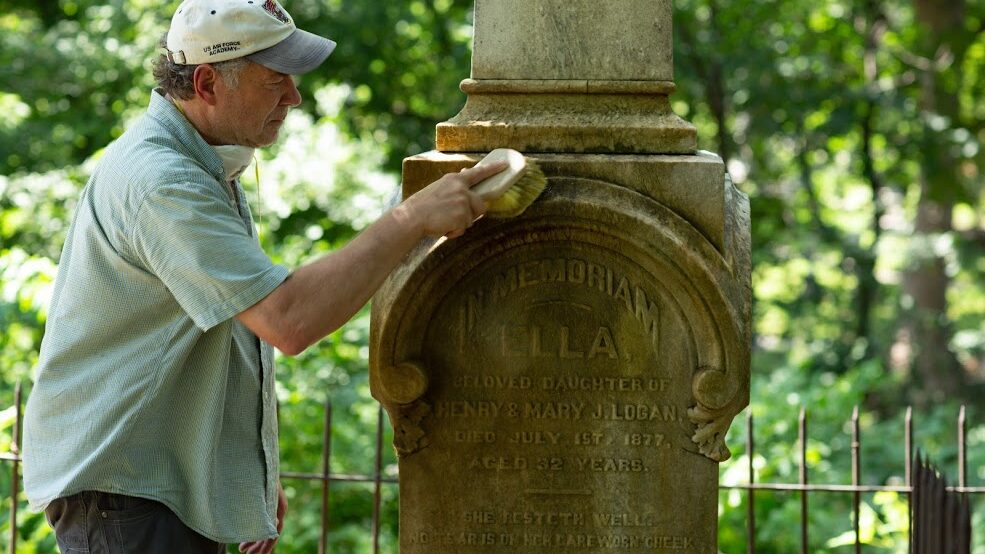 East Village resident Patrick Tisdale Jr. restores an 1877 headstone in Mount Zion Church Cemetery in the Georgetown neighborhood of Washington, D.C. Tisdale leads a volunteer team that rehabilitates headstones and maintains the grounds of Mount Zion and the adjoining Female Union Band Society Cemetery. The graveyards were multiracial, but some white Washingtonians later had the remains of ancestors moved to a “whites only” graveyard. (Dwayne Franklin)

Among the stratospherically priced real estate parcels in Washington, D.C.’s oldest historic neighborhood sit the final resting places of free blacks, slaves and freedmen who peacefully coexisted with their white neighbors decades before the Civil War. Today buildings go up as fast as rent, but despite a townhouse developer’s best efforts, the cemeteries’ occupants aren’t going anywhere.

Georgetown, a Potomac river enclave that’s a short walk from the White House and a few blocks from the Kennedy Center, is full of Georgian mansions, upscale boutiques, gourmet eateries and five-star hotels. It’s also Washington’s most visibly gentrified neighborhood, home to white money and influence. But now a descendant of 19th century black Georgetowners is leading an effort to restore the graveyards and create an educational center that honors black contributions to the community.

“Our goal is to preserve this historical space in Georgetown,” said Lisa M. Fager, executive director of the Mount Zion-Female Union Band Society Foundation, which is overseeing the maintenance and restoration of the properties. “And, ultimately, recreate what had turned into a dog park over the years into a place to host educational programs and act as a venue for gatherings and reflection.”

‘The last black piece of Georgetown’

Near the corner of 27th and Q Streets in Northwest D.C. sits the Old Methodist Burying Ground. Built in 1809, the three-acre property is made up in equal parts of the Mount Zion Church Cemetery to the east and the Female Union Band Society Cemetery to the west. These burial grounds served as the final resting place for both black and white Georgetowners until, in 1849, Oak Hill Cemetery was established just to the west for “whites only” burials.

“Once the Oak Hill Cemetery opened, white people had their relatives disinterred and relocated because they didn’t want blacks and whites buried together,” foundation President Neville Waters III said in a September 2020 Checkpoints magazine interview. “Even in death, there was this mindset of segregation.”

As burials declined over the years — and eventually ceased altogether in 1950 — the two “black-only” cemeteries fell victim to invasive weeds, poor water runoff and erosion, and the disintegration of countless wooden, concrete and sandstone grave markers.

By the mid-1950s, once it became obvious that Mount Zion (and its landlord, Dumbarton Street Methodist Church, through a 99-year lease) and the Female Union Band Society could no longer afford to maintain the cemeteries, they took legal steps to disinter buried remains and prepare the land for sale. Mount Zion and the society won approval for those plans in 1963 and 1964, respectively.

Commercial plans by the Rock Creek Corp. to build townhomes on the property fell through due to zoning issues and opposition to disinterment by several heirs of people buried in the Female Union Band Society Cemetery, including Waters’ father, Neville Waters Jr., whose mother is buried there.

Around 1970, this tale of conflicting interests reached Vincent deForest, chairman and president of the Afro-American Bicentennial Corp. Compelled by a prominent colleague, deForest’s team joined forces with Community Assistance Inc., a local nonprofit run by attorney Alan Raywid, to launch civil proceedings to preserve the cemeteries.

“Charles [H.] Wesley, who had been president of Wilberforce University, and was leading the Association for the Study of African American Life and History at the time — and was an African Methodist Episcopal minister — said to me, ‘We have to save the cemeteries. We gotta work on this,’” deForest said. “We were a confluence of historians and lawyers that recognized that we each had something to give.”

The allied organizations faced roadblocks from the very beginning, deForest recalled. The legal battle lasted well into the 1970s.

“In order to have a case, you have to have standing — legal standing,” he said. “I didn’t grow up in D.C., I didn’t have anyone in the cemetery, and so I had no standing. Mount Zion wasn’t the owner [of the property], and so they had no standing. The parishioners at Dumbarton didn’t own the property; the Methodist Church did. So, we had to appeal to the hierarchy of the church to convince them to temporarily donate their proprietary interests to my organization to give us standing.”

Meanwhile, the Female Union Band Society, piqued by the renewed interest of Rock Creek Corp., was still in a selling mood. However, the U.S. District Court for the District of Columbia allowed Waters Jr. to intervene on behalf of his late mother, Gertrude. In 1975, after nearly 12 years of litigation, Waters Jr., deForest and their legal team persuaded U.S. District Court Judge Oliver Gasch to rescind the previous order authorizing the removal of remains and sale of the property. Gasch obliged but left the upkeep in the hands of a team of volunteers.

“The judge basically said, ‘This is the last black piece of Georgetown,’” Fager said. “But it was up to us to maintain it.”

The property was added to the National Register of Historic Places in 1975.

But as time went by, the cemeteries were mostly used as a pass-through for joggers and dog-walkers entering and exiting nearby Rock Creek Park.

Rebuilding history one headstone at a time

Using a $20,000 grant from the D.C. Commission on Arts and Humanities and private donations, the foundation has conducted site surveys to identify property boundaries and monuments, created a fine-scaled topographic map, inventoried headstone groupings, and employed ground-penetrating radar to locate burial sites.

Waters is building a donor list of some 15,000 individuals and organizations in advance of a capital campaign that will aim to raise $10–15 million.

“In 2021, we want to leverage our 2020 efforts with programs that we can turn into more sustainable funding,” he said. “This is critical to our mission and survival.”

The foundation hopes to acquire and convert two townhomes adjacent to the cemeteries into a learning and research facility, office space and visitors center, Waters said.

“We’re looking at what [architect] Rodney Leon did with the design of the African Burial Ground National Memorial in New York City for clarity and ideas of what could be,” Waters said. “It would warm me to have [the entire facility and grounds] used as a sacred place for learning, relaxation and meditation.”

Timing appears to be in the foundation’s favor. Both chambers of Congress are considering legislation, the proposed African American Burial Grounds Network Act, to establish a network of historic African American burial grounds and a program within the National Park Service to provide technical assistance, educational materials and grants for the preservation of burial sites and cemeteries within the proposed network.

“Too often, the graves of African-Americans have been forgotten or ignored by the communities in which they were located,” said Rep. Alma Adams (D-N.C.), who co-sponsored the House bill with Rep. A. Donald McEachin (D-Va.). “This has been a disservice to the memories of those who came before us, and to the preservation of our nation’s history. African American burial grounds are an integral part of our country’s heritage. Creating and maintaining a national network of African American burial grounds will help communities preserve local history.”

“It’s helpful to be in D.C., with the things expected to come out of this administration,” Waters said. “COVID has presented some social challenges, but it’s softened the grounds for some new things.”

«Previous Post
Recovering from a Broken Neck, Delvin Breaux Skipped College Football but Played in the NFL»Next Post
For Mixx, Studio ‘Collabs’ With Friends are More Precious than Gold or Platinum