The rare aircraft display of US Air Force as seen from the air in a drone tour.
By Maja Mishevska January 11, 2021
Facebook
Twitter
Linkedin
Email 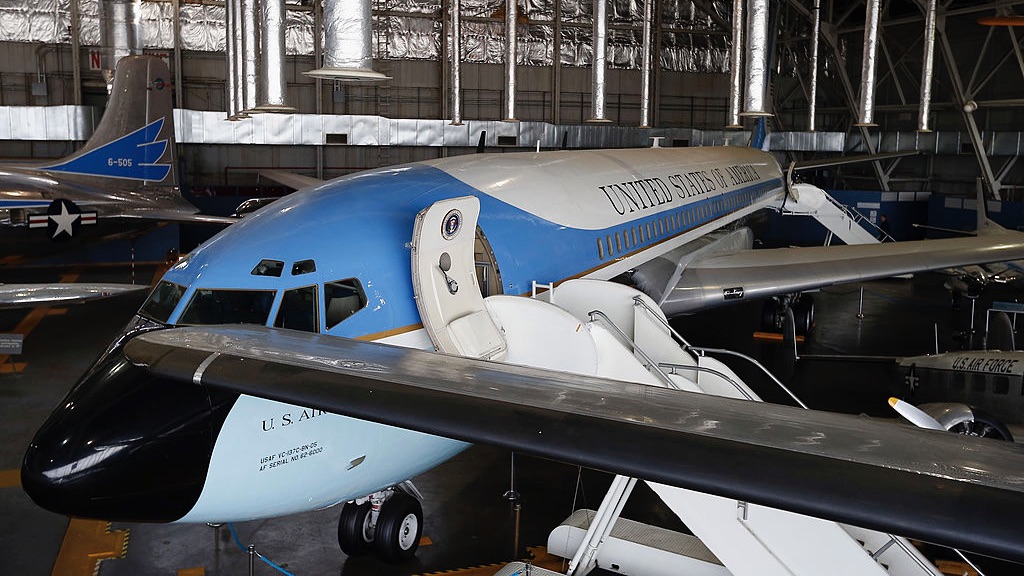 Special Air Mission (SAM) 26000, President John F. Kennedy's Air Force One, sits on display at the National Museum of the United States Air Force in the Presidential Gallery on November 20, 2013 in Dayton, Ohio. SAM 26000 flew JFK's body from Dallas to Washington D.C. Vice President Lyndon B. Johnson was sworn in as the new president on the plane earlier in the day. (Photo by Matt Sullivan/Getty Images)

Ohio, USA — Now, you can take a tour of the National Museum of the United States Air Force, Dayton, and look at the rare aircraft in its various galleries, through this drone footage.

As you go through them, each of the galleries comes alive in front of you in a rare bird’s eye view. The footage was shot at the National Museum of the United States Air Force, located at Wright-Patterson Air Force Base, Dayton, Ohio.

Acclaimed as the world’s largest and the oldest military aviation museum with more than 360 aerospace vehicles and missiles, its origin dates back to 1923, to an informal showing of World War I aircraft and equipment native to the US and to other foreign countries.

The display took place at an aircraft hangar in downtown Dayton. The city is no stranger to aviation history, the Wright Brothers, pioneers of the airplane, developed their 1903 Flyer (the world’s first powered plane built with a wooden frame) over here.

It moved to its current Wright Field location following land donations by the residents in the 1920s. After several expansions and renovations, the Korean War and Southeast Asia War Galleries were opened in 1988. The low flying drone takes you through these galleries at a controlled pace helping you absorb its contents.

The aim of these engaging exhibitions, according to the museum, is to collect, research, conserve, interpret and present the Air Force’s history, heritage and traditions.

Reporting over a million visitors each year and spread across 76,890 square metres, the museum offers virtual 360 self-guided tours, allowing visitors to navigate through it using a drop-down map or by following navigational arrows connecting the individual nodes. The museum once designed in chronological fashion, encourages you to visit the Early Year Galleries (EYG) for a glimpse into its formative years.

“The EYG conveys the magic & wonder of the formative days of military air power. The gallery’s aircraft collection, exhibits and artifacts combine to capture the spirit of imagination of that transformational era through World War I and to the lead up to World War II,” said the museum’s Twitter handle.

As per a report titled U.S. Military Forces in FY 2020: Air Force published in October 2020 by Mark F. Cancian, Senior Adviser, International Security Program, the Air Force has continued to add to its strategic fleet in 2020. “Air Force procures only 12 MQ-9 Reapers in FY 2020, so the unmanned element of its aircraft inventory has plateaued at six percent of the force,” it said.

Among other aircraft and missiles, visible in the footage is the Air Force One fleet that has carried the President of the USA, over the years. The entrance to the museum, which has now reopened, is free for all visitors.