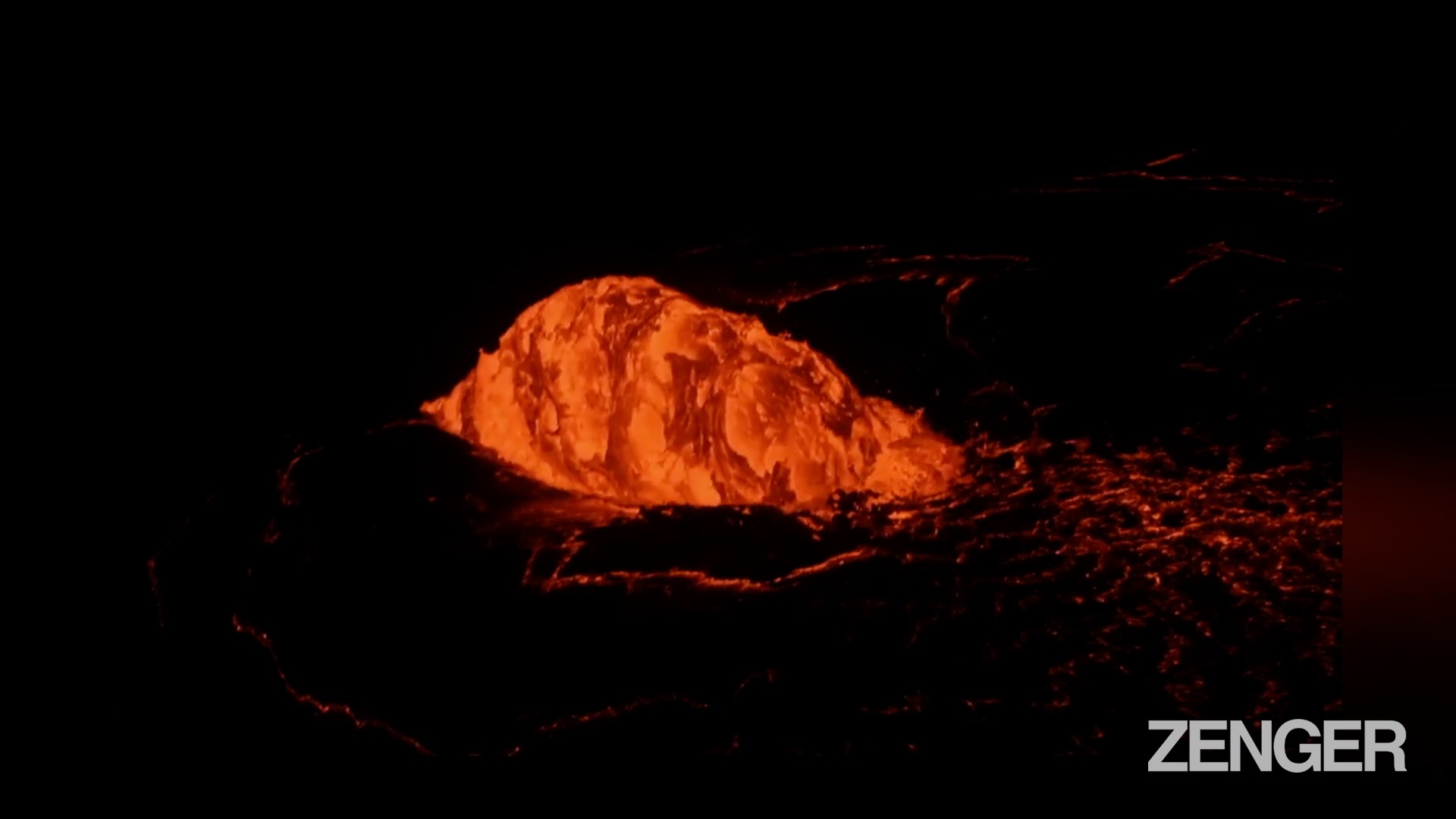 Dome fountain at the inlet to the lava lake in Halema'uma'u crater. (@USGSVolcanoes/Clipzilla)

Hawai’i, USA — Nature’s wonders are always fascinating. A rare volcanic eruption recently caught attention of geologists.They captured mesmerizing footage of a huge dome of molten lava flooding to the surface and rapidly falling as it spreads in the Kīlauea Volcano’s Halema’uma’u crater, where this fountain-like dome of molten rock is flowing upwards in the Hawaiian Islands.

It was shot two weeks after the Hawaiian Volcano first began erupting.

The agency wrote in their post, “Lava from the western vent cascades beneath roofed vertical channels to enter the lava lake at an inlet that has become partially submerged.

“The result is a rolling upwelling of lava near the inlet called a ‘dome fountain.’

“The feature resembles, in part, a bubbling water fountain.”

According to the observers from the USGS, the ‘dome fountain’ was formed due to the lava coming out of a vent beneath the surface of the lava lake, but it can also be formed when the lava emerges from a vent or fissure that is constricted.

The height of the lava fountain was approximately 5 meters and it was about 10 meters wide.

They said that nearly 100,000 gallons of lava currently emerge from the crater per minute, flowing into the 3 square kilometers, 190-meter-deep lake.

The lava eruption first started around 9.30 p.m. on December 20. The USGS Hawaiian Volcano Observatory (HVO) spotted it in the Halemaʻumaʻu crater at the K&imacr;lauea Volcano’s summit. The water lake at the summit existing since 2019 quickly vaporized following the effusive eruption. Lava started flowing from three initial vents in the wall of Halemaʻumaʻu crater into a lava lake at the base of the crater.

The lava lake was around 630 feet (192 m) deep as of January 6. The molten lava site is not accessible to the public. However, its plume and nighttime glow can be observed from a distance.

According to a recent Twitter post by the USGS, a very rare symmetrical dome fountain that reached the height of about 20 meters was observed in the Kilauea Volcano in October 1969.

Written records of Hawai‘i date back to around 200 years as compared to other volcanic regions such as Indonesia, Iceland, Japan and Italy. Most eruptions since 1823, when the first American missionaries visited the Island of Hawai‘i, have been recorded.

Kīlauea and Mauna Loa erupted every two or three years on an average. This makes them the most active volcanoes in the world.

Continuous eruptive activity is observed in the Halema‘uma‘u crater throughout the 19th and the early 20th century, besides the individual Kīlauea eruptions recorded since 1778.

Eruptions have been prolonged and frequent at Kīlauea since July 1950.

The rate of eruptions at the Hawaiian hot spot in the past couple of centuries have been exceptionally high as compared to its long-term average. However, reasons behind them have not yet been understood.

The Kilauea Volcano is located on the southeastern flank of the Mauna Loa Volcano and looks like its bulge. Hence, Kīlauea was treated as a satellite of its giant neighbor, and so for many years. This perception changed following research over a few decades. It is now clear that Kīlauea owns a magma-plumbing system, over 60 km deep from the surface.

Hawaiians used to call only the summit caldera as Kīlauea. However, the name has been extended to include the entire volcano by scientists. A large depression built following a volcanic eruption and collapse is called a caldera.

It is believed that the Hawaiian volcano goddess Pele lives at Kīlauea. This has been mentioned in Hawaiian chants and oral traditions.