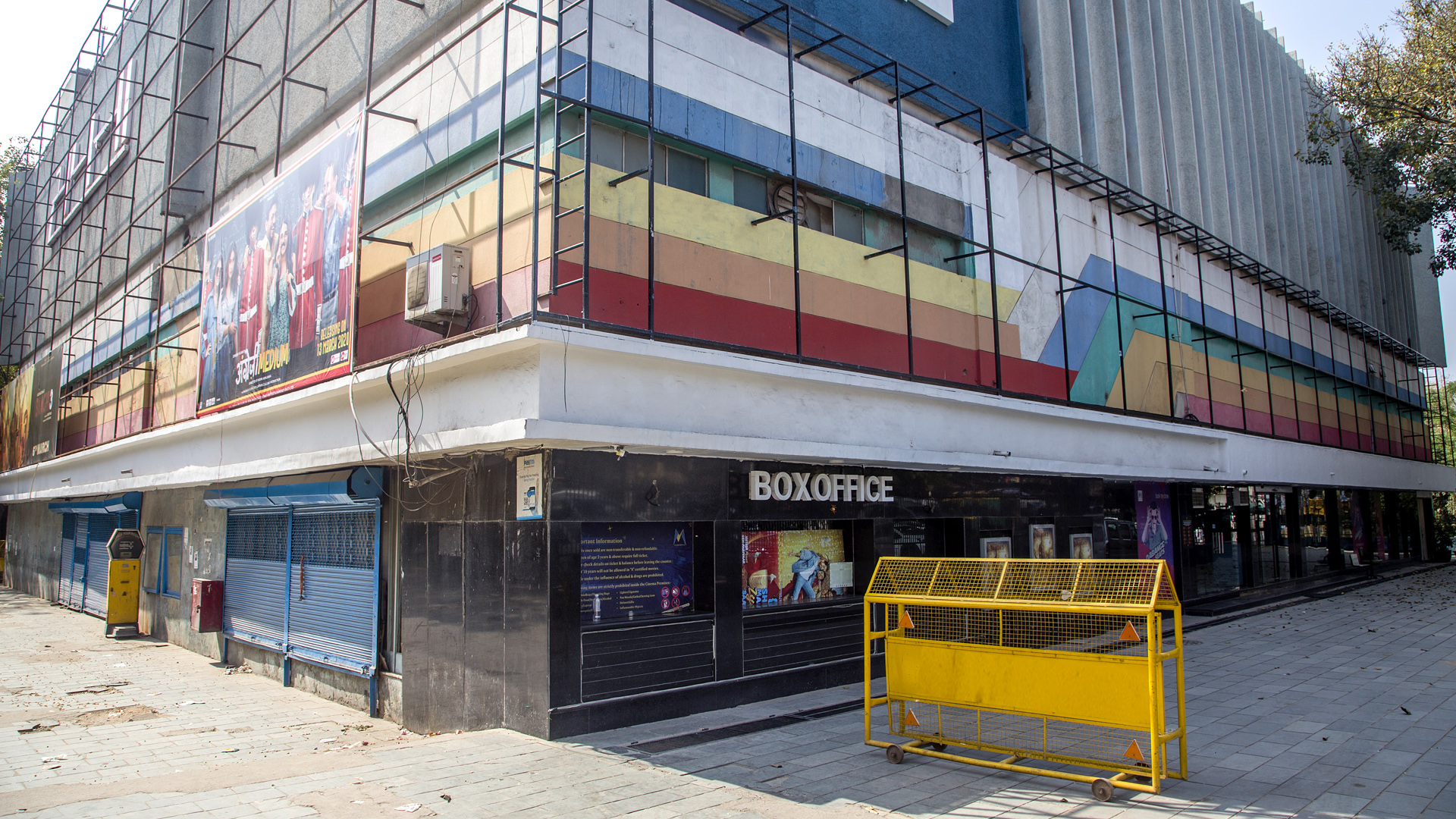 Tamil Nadu has reverted to operating cinemas at half capacity after a rap on its knuckles from the national government for allowing full occupancy. (Getty Images)

After enjoying a brief stint in cinemas allowed to operate at full capacity in the southern Indian state of Tamil Nadu, the superhero’s new film run has been cut short — along with cinema revenue — since the government found out about the circumvention of pandemic rules.

“This amounts to dilution of the MHA (Ministry of Home Affairs) order dated Dec. 28, 2020 issued under the DM (Disaster Management) Act, 2005,” the ministry said. 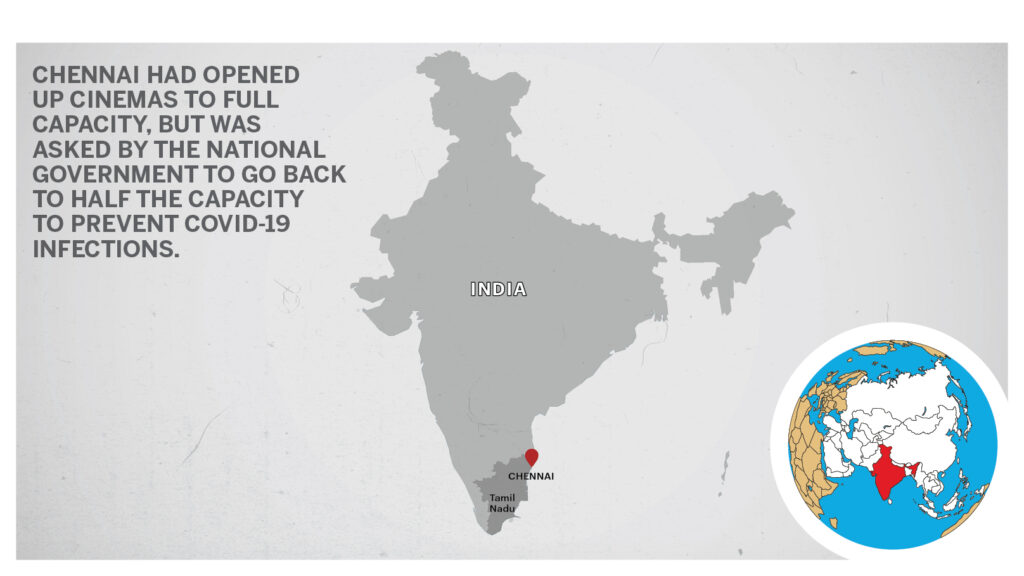 The MHA circular also highlights an order by the Supreme Court, which instructs cinema patrons to follow protocols for the prevention of Covid-19, such as wearing masks and maintaining social distance while watching movies.

“In view of the above, the government of Tamil Nadu is requested to immediately issue necessary order to bring their guidelines in line with the MHA guidelines; and inform compliance to this ministry,” the MHA order said.

“We are in the middle of a revival, and there is still a fair distance to go,” said Alok Tandon, CEO of INOX Leisure, India’s largest multiplex chains with 147 multiplexes and 626 screens in 68 cities. “The reopening can be distinctly seen in two phases — one, prior to the new releases, and the other, after the new releases. Occupancy levels have been doubling in the second phase, with movies such as ‘Suraj Pe Mangal Bhari,’ ‘Indoo Ki Jawani,’ as well as Hollywood hits such as ‘Tenet’ and ‘Wonder Woman 84.’

“Despite facing the strongest headwinds, the cinema exhibition sector would be among the fastest sectors to make a turnaround,” said Tandon. “We are a blockbuster away from returning to our usual buzz, and 2021 will be all about serving entertainment with warmth and care.”

“We have even witnessed a lot of house-full shows at 50 percent seating since the cinemas reopened in mid-October.”

“Watching a movie in a cinema hall has its own charm and excitement,” said Diksha Varma, a Mumbai-based movie buff. “The sound effect along with a big screen makes it more worthwhile. The pandemic has forced almost every movie lover to switch to OTT [streaming] platforms, but it can never match the excitement. However, people who really love movies and are driven by content will surf through Netflix, Amazon, and Hotstar.”

Varma said she has switched to OTT platforms since the pandemic and is unsure whether she can visit a cinema hall anytime soon.

The Indian film industry — the largest producer of films in the world — like other major industries worldwide, has suffered during the pandemic. Cinemas have been closed since the national government imposed a lockdown in late March last year. Production and shooting of films also stopped.

The value of the film industry is projected to drop 67 percent in fiscal year 2021 to INR 61 billion($830 million), compared with INR 183 billion ($2.5 billion) in FY20, according to a study by KPMG. The report also states that the value will increase in FY22. 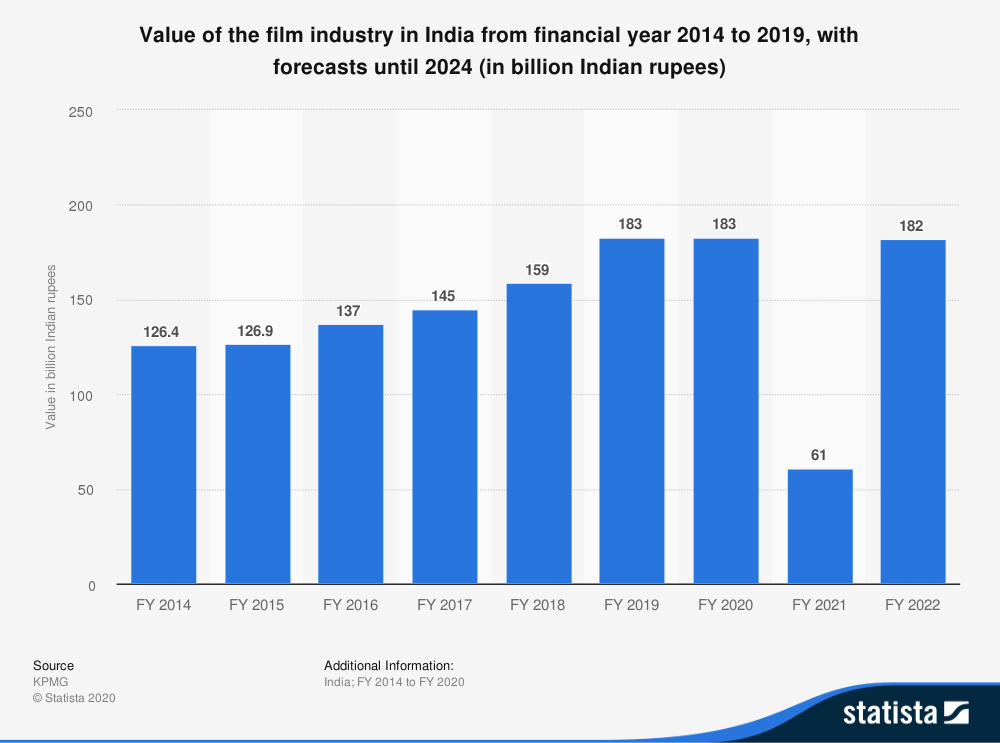 “The industry earns about INR 1,000 crore ($136,476) each month at the box office,” said Tandon. “There is additional revenue of INR 400 crore ($54 million) from food and beverages. Collectively, the cinema exhibition business would have suffered revenue losses of more than INR 10,000 crore ($1.36 billion) during the lockdown.”

Tamil Nadu will allow extra shows next week because of crowds expected during the Pongal festival, a harvest celebration from Jan. 14-17 this year.