Let Us Spray: How Graffiti Went From Clandestine Act to Urban Art

Though it's gone mainstream in many ways, this street-born art form still reflects a rebellious outlook on the world.
By Vanessa Sam January 10, 2021
Facebook
Twitter
Linkedin
Email 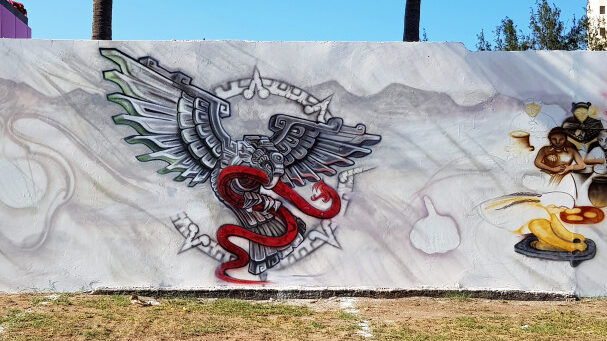 The word graffiti comes from the Greek term “graphein,” which means “to draw, write, or scratch.” It also translates to “scribble” or “inscription” in Italian (“graffito,” singular; “graffiti” plural.)

During the 20th century, the street art that shares the name became known to the world. Hence, the images drawn on buildings with spray paint became known as graffiti.

What is the history of graffiti?

Since the dawn of time, man has drawn. The first drawings ever made were the cave paintings, which show the early human tribes’ hunting activities. An example of these lies in Baja California, Mexico. The Baja Cave Paintings are over 1,500 years old.

Painting as a form of relaying messages has always been part of human society. Be it in Ancient Times, the Middle Ages, or the Modern Era, drawing has kept the same innate meaning as those ancient cave paintings. Then, in the 1960s, young people started to express themselves via graffitiing the streets, subway systems and buildings of countries such as America, France and England. It became one of the main staples of punk culture to express freedom and rebellion against any form of oppression.

Mexico was not immune to graffiti’s artistic allure. The first expressions of this street art appeared in border cities between Mexico and the United States, such as Tijuana, Nogales, and El Paso. In fact, it was Tijuana where the first Mexican graffiti appeared in the ’70s. From there, graffiti soon spread to the rest of the country. In the ’80s, youth gangs in Guadalajara and Aguascalientes made these states the primary reference for Mexico’s graffiti culture.

“I have been graffitiing since I was 16 years old. I started by doodling in my notebooks, making different designs,” said Luis Mario Duran Alvarez, professional graffiti artist and muralist. “After that, my friends started to ask me to do some designs in their notebooks, and from there, I went to paint my designs in my room. As time went by, some friends asked me to paint one of my designs on a willing neighbor’s wall. From there, 10 years have passed. I have never denigrated my craft by doing my designs on walls without first asking their owners for permission, as that would diminish the value of my work.

“Many times, I do murals depending on my mood, even on the walls of a client that has hired me. I have been hired to do my designs in restaurants, businesses, and even medical clinics. I feel very free when I do my designs on a wall they have lent me, as it both relaxing and freeing at the same time. However, total satisfaction does not come until I see it finished, and people start taking pictures of it.”

At first, graffiti had a bad reputation. People believed that such artists only sought to damage buildings or drew obscene messages without any background of artistic expression. However, as time went by, young artists developed better drawing techniques, and nowadays, people compare some graffiti with murals of Diego Rivera or Clemente Orozco. Thanks to removing the street art stigma, many graffiti artists prefer to ask the local authorities or the buildings’ owners before making their designs in public spaces.

As more graffiti artists appear, they have begun to add to their works “tags or signatures” to gain respect with other urban artists. There are several types of graffiti art, like the “throw ups,” where artists try to quickly fill an entire surface, doing the design in just two or three different colors, in as few movements as possible. Another common motif is “wildstyle,” which consists of interlocking letters and other symbols, creating elaborate figures.

One other notable style is is “stencil graffiti.” In it, artists use a template and only apply the aerosol to reproduce the same design, mainly for socio-political reasons. Stencil graffiti is a direct descendant of the different New York graffiti styles from the ’70s.

Current-day graffiti often includes a 3D designs with bright colors and shadows that give a more realistic touch to the drawing. Moreover, some artists add characters straight out of literature, films or television shows to their graffiti.

(Translated and edited by Mario Vazquez. Edited by Matthew Hall)

«Previous Post
The Long and the Short of Indian Cinema’s Anthology Trail»Next Post
Discover Huaraches, the Pre-Hispanic Sandals that Are Still Around