A sinking site and the Mexican Revolution helped cause construction of the architectural marvel to take much longer than planned.
By Vanessa Sam and Christian Valera Rebolledo January 9, 2021
Facebook
Twitter
Linkedin
Email 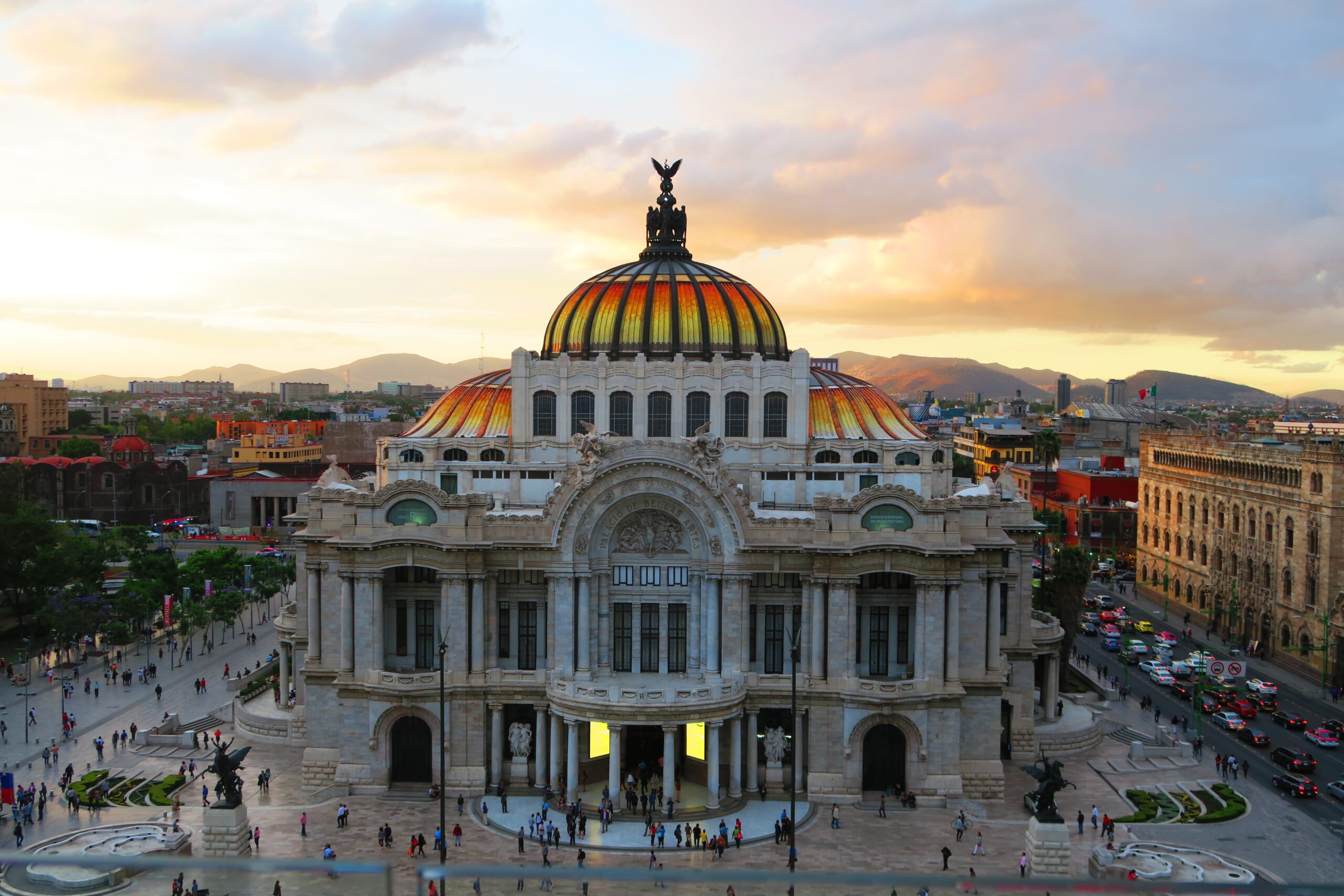 Mexico City’s majestic Palace of Fine Arts is a source of pride for many Mexicans. Located between the Alameda (Mexico City’s Central Park) and the Post Office Building, a variety of factors conspired to cause its construction to span three decades.

The Italian architect Adamo Boari designed the palace and began building it in 1904, at the behest of Mexican President Porfirio Díaz’s administration.

Operating under the motto “Order and Progress,” Díaz sought to create projects that would better the nation, and the Palace of Fine Arts was one of them. He gave the order to finish the building to celebrate the 1910 Centennial of Mexico’s Independence. However, that did not happen.

“Porfirio Díaz’s administration bought the property where the National Theater was built,” said José Daniel Juárez, a tourist guide of the Palace.

Boari demolished it to build the new Palace. He designed it following the trending art nouveau or modernist style, using curves and asymmetry in many elements, including floor plans, decoration and structure leveling.

The Industrial Revolution brought many possibilities to the arts, including the use of serial production. Boari wanted his building to be a reflection of its time. So, he incorporated elements of this new aesthetic into it.

Boari described the new construction “as a building with majestic spaces, greenhouses, sculptures, party rooms and a theater, and — last but not least — completely clad in marble,” said Juárez.

The masons got to work, but a geological reality caused a delay. Built over a former lake, Downtown Mexico City has unstable terrain, especially for a heavy building with a marble and steel structure and a concrete platform. Boari and his team needed to restructure the foundation.

Boari wanted the facade to pay homage to the elements of pre-Hispanic cultures. So, he included depictions of snakes, jaguars, monkeys, and coyotes, among other animals and deities.

The already existing challenges on the construction worsened when the Mexican Revolution broke out in 1910.

“The metallic structure began to collapse, which was one of the causes that prevented the building from being inaugurated for the Centennial celebration in 1910,” said Hugo Antonio Arciniega, who has a doctorate in Mexican art history. “But if we dig deeper into the country’s context, there were also economic difficulties related to the outbreak of the Revolution.”

Boari returned to his home country of Italy in 1916, but he continued working from afar, sending photographs, plans and updates. Boari left testimony of his passionate work in 34 explanatory plates of the structure and ornaments compiled in “La costruzione di un teatro.”

Architect Antonio Muñoz resumed it in 1918-19, during the administration of President Venustiano Carranza. Muñoz planned to finish by 1921, but that proved impossible, due to Mexico’s economic and political problems. However, he did make some progress in the project.

President Pascual Ortiz Rubio decreed in 1930 that the completion of the building should be cheaper and that the teams should respect Boari’s original decisions.

The building was already an expression of respect and admiration for the Mexican elite. But due to the Mexican Revolution, which raged from 1910-20, that was problematic. Regardless, the construction stopped again, but not for long this time.

Two years later, architect Federico Mariscal took over. He redesigned the building’s interior in the art deco style that was quite popular at the time.

Among the modifications occurring under Mariscal’s direction: the party hall became a visual arts museum; the presidential box shrank, yielding its space to a foyer that today serves as the international art exhibition hall; and a conference room and a folk art museum with exhibition galleries were created. Today, the galleries host artworks of national relevance.

The building also incorporated more public spaces, including the lobby, hall, book museum, library and a restaurant. Regarding the showroom, the lunettes’ floors and amphitheaters grew, making the space accessible to more people.

A plaza with four sculptures of Pegasus serves as a preamble for entering the palace.

President Abelardo Rodríguez cut the ribbon for the building on Sept. 29, 1934. Since then, the Palace of Fine Arts has witnessed more than 100,000 events, including concerts, plays, opera, dance performances, and painting and sculpture exhibitions.