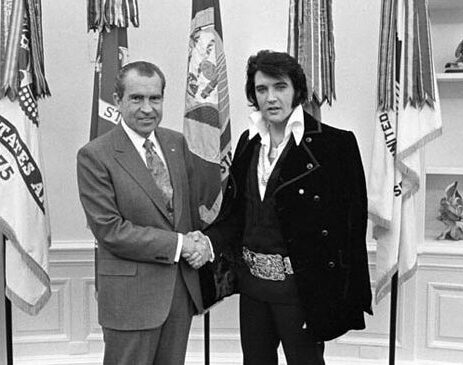 MEMPHIS,  Tenn. — As they do every year, revelers are traveling to Graceland in Memphis, Tennessee, to celebrate what would have been the 85th birthday of the “King of Rock ‘n’ Roll.” But this year, there’s a little something extra for visitors to the mansion Elvis Presley called home for many years.

In addition to seeing his gold records, elaborate sequined jumpsuits, lavish furniture and collection of cars, visitors to this year’s birthday celebration from Jan. 7-9 will also get a glimpse into a meeting between two of American history’s most legendary figures.

While unlikely, the meeting wasn’t just happenstance. Elvis had a purpose in mind when he traveled to Washington, D.C., to meet the president: to offer his services as a “Federal Agent at Large” in the war on drugs and perhaps add a prize piece to one of his many collections.

Among the many items Elvis collected were police badges, and he obtained several dozens over time from various departments around the country, including in Memphis, Los Angeles, Mobile, Ala., and Cincinnati, among others. He even collected a constabulary badge from Kent, England.

But what he really wanted was a badge from the U.S. Bureau of Narcotics and Dangerous Drugs.

So, Elvis flew from Memphis to Washington, D.C., to offer his services to Nixon, hoping the badge would be part of the deal. But on the morning of Dec. 21, 1970, he arrived at the Capitol on a whim, with no formal meeting scheduled.

Instead, Elvis personally delivered a five-page hand-written letter to Nixon at the gates of the White House.

“Sir, I can and will be of any service that I can to help the country out,” he wrote in it. “I will be here for as long as it takes to get the credentials of a federal agent.”

With that, the president agreed to meet.

“After Elvis, the biggest star in the world, asked me to proofread his letter to President Nixon, the leader of the free world, we ended up in the Oval Office of the White House,” said Jerry Schilling, a friend of Elvis who accompanied him on his visit to Washington. “Now Elvis’s letter is displayed at the National Archives in Washington, D.C., along with such documents as the Declaration of Independence and the Bill of Rights. It was an honor to be part of this true American story.”

The photo Nixon and Elvis took together, which shows them shaking hands in front of a line-up of state flags in the Oval Office, is the most requested photograph in the U.S. National Archives. At the meeting, Elvis had a gift for Nixon and presented him with one of his Colt-45 revolvers. Later that afternoon, Elvis received the badge he flew all the way there to get.

In her memoir “Elvis and Me,” Elvis’s wife Priscilla Presley wrote: “The narc badge represented some kind of ultimate power to him.”

Now, many of the artifacts from that famous meeting can be seen at the exhibit at Graceland. They include a five-page handwritten note Elvis wrote to Nixon on American Airlines stationary and the outfit Elvis was wearing that day — a purple velvet suit with a gold belt buckle — along with photos and other artifacts from that visit, including the famous badge Elvis sought.