Stalemate Between Farmers, Indian Government as Seventh Round of Talks Fail

“Seventy farmers have died during the protest, and their lives cannot go in vain,” a leader of the farmers’ wing said. 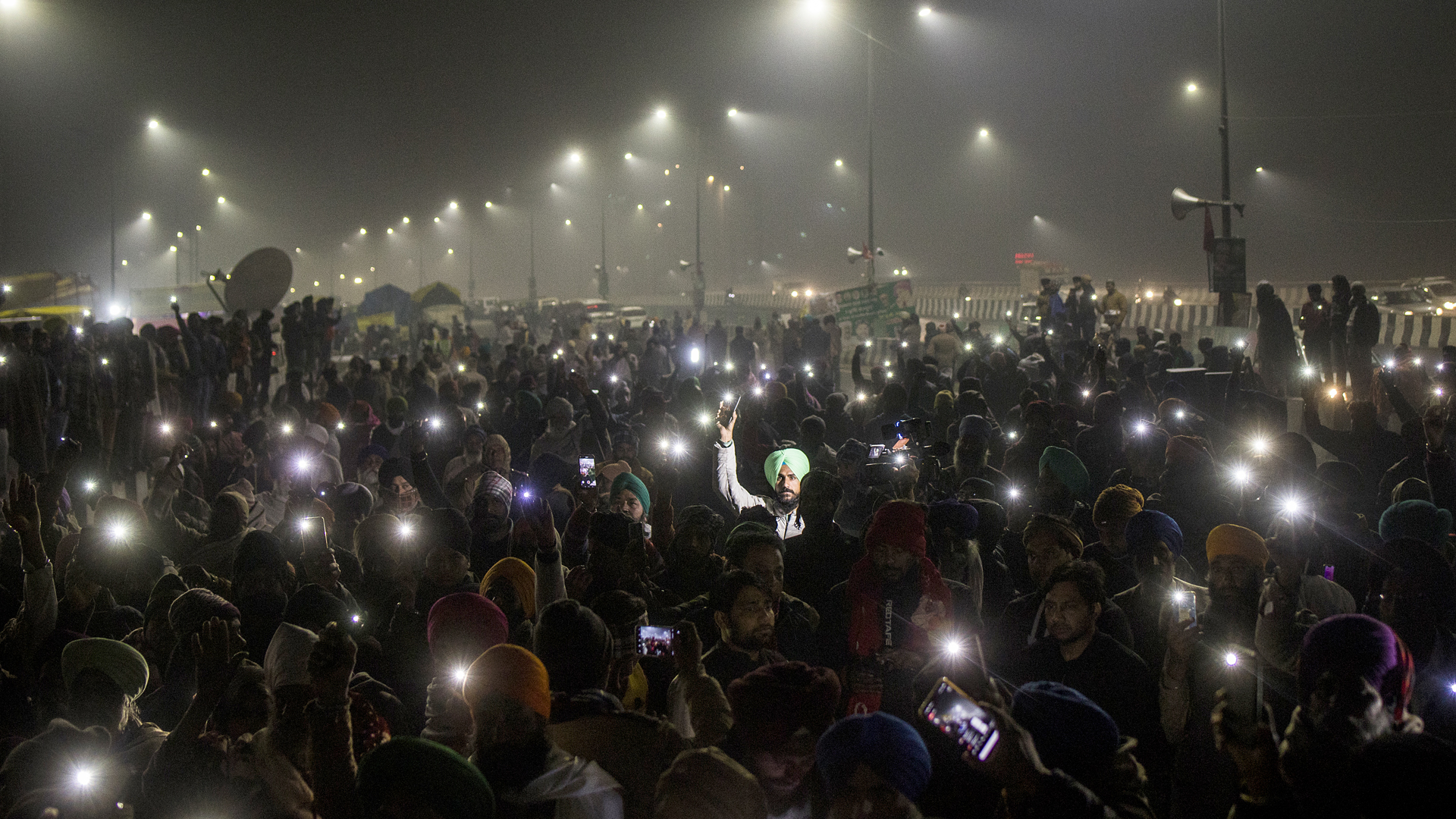 Farmers raise their phones as they participate in a vigil remembering the farmers who lost their lives during the ongoing protests. (Anindito Mukherjee/Getty Images)

Pune, India — India’s Supreme Court plans to form a committee of agricultural experts and independent members to end the protests over three new farm laws, which have continued through seven rounds of talks to resolve matters.

The court said there has been “no improvement” in talks between the government and a representative group of thousands of protesting farmers and adjourned the case until Jan. 11 without issuing any orders.

Farmers, mainly from the states of Punjab, Haryana, and Uttar Pradesh, have been protesting at the borders of the national capital for more than a month despite cold and rainy weather. Farmers unions are asking the Indian government to repeal the three new farm laws it passed in September 2020.

The farmers claim the laws would affect demand for their produce in local markets and leave them at the mercy of big corporate houses. They say the three laws will weaken the Agriculture Produce Market Committee, which was set up to ensure farmers are protected from exploitation at the hands of retailers and to check farm retail prices from spiraling. 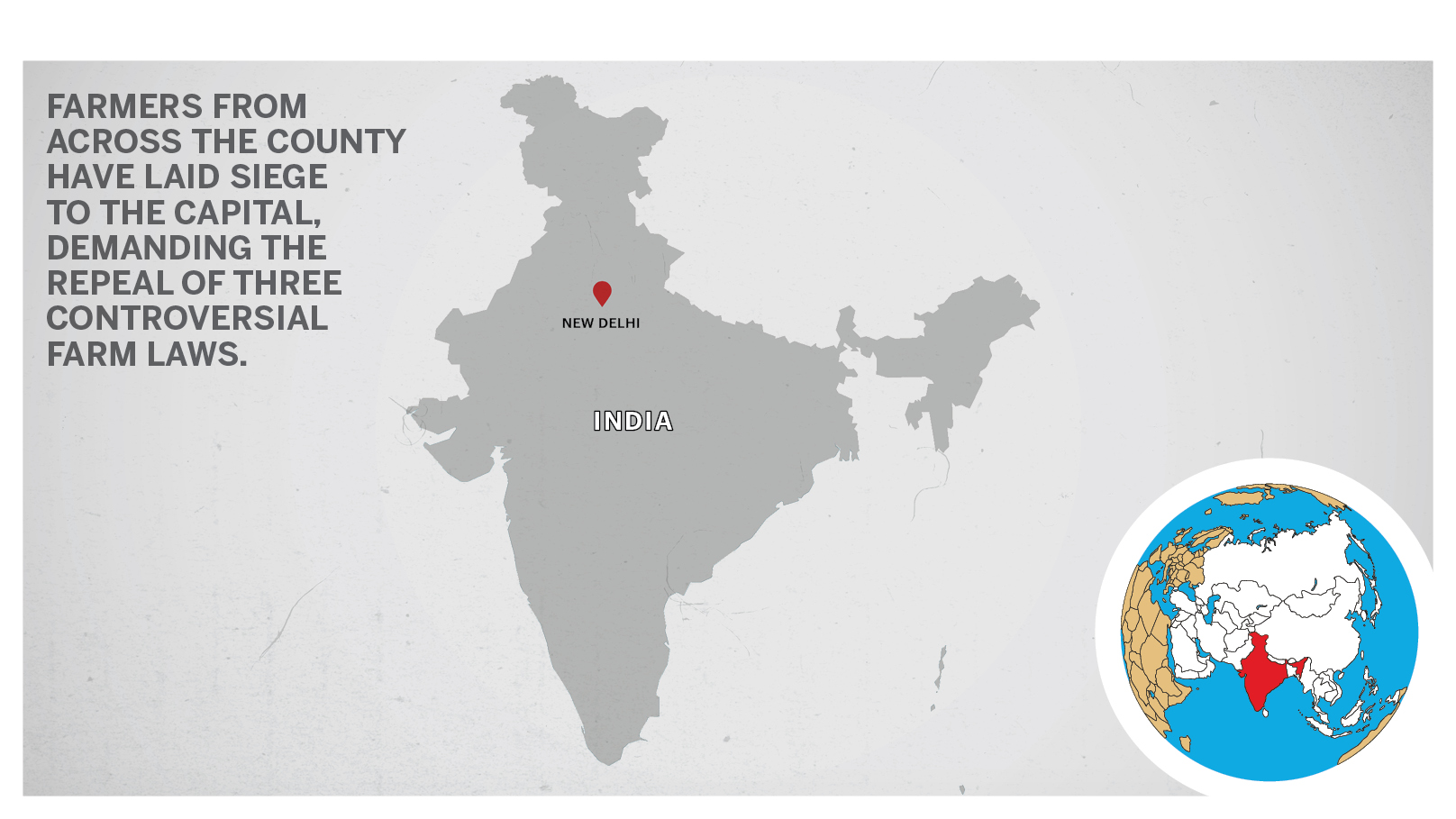 To date, the government has ruled out repealing the laws. The Center wing of the government accuses farmers of being “rigid” and “stubborn,” that farmers’ fears are misplaced, and that the reforms would increase their income.

Agriculture Minister Narendra Singh Tomar, Commerce Minister Piyush Goyal, and Minister of State for Commerce Som Prakash represented the Center during the seventh round of talks.

Goyal tweeted what he said is Prime Minister Narendra Modi ‘s “commitment to farmer interest,” citing economic benefits to farmers and stating that the Minimum Support Price (MSP) will remain in effect.

During the most recent round of talks, the first half of the meeting focused on the three laws, said Hannan Mollah, leader of the All India Kisan Sabha, the farmers’ wing of the Communist Party of India, who attended. “There is no alternative for repealing the laws, and we will not agree to anything else,” he said.

“Till the last meeting, they showed hints of repealing the Acts,” but in the seventh round, they declined to do so, said Mollah. “The second agenda was MSP. We will not talk further unless they repeal the three laws. We have given them ample time for consultation with other leaders.”

Mollah said that the farmers are strong enough to continue the protests against the government, which  he claims “is backed by money, power, and false propaganda.”

“Seventy farmers have died during the protest, and their lives cannot go in vain,” he said. “We will continue fighting and earn our place. It will be difficult, but nothing is impossible. During the meeting, the government officials paid tribute to the dead by keeping a moment of silence, but that will not help. If they want to pay tribute, they will have to repeal the laws.

“When the ordinance was passed, we burnt 15,000 copies of it and protested,” said Mollah. “After that, we sent several letters to Prime Minister Narendra Modi and [Agriculture Minister] Tomar. When the Acts were taken to parliament, we again pleaded with them to talk to us, but all in vain. After the Acts were passed, we again requested them to hear us before implementing them.”

He said when all these measures failed, farmers decided to march to Delhi and talk to the government authorities, but they were denied entry to Delhi by police presence.

“After all this, if we are tagged as ‘rigid,’ then that is propaganda by our government. It is they who are rigid in not listening to us,” said Mollah.

The eighth round of talks is scheduled for Jan. 8.