Trump supporters protest as extremists smash windows and batter police. A plainclothes cop kills an activist who was a USAF vet. 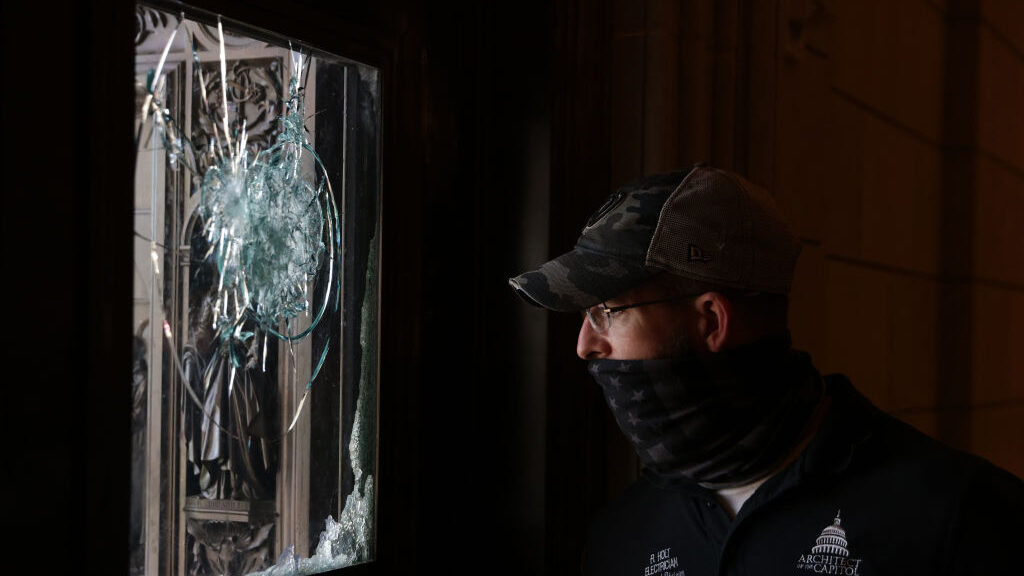 A member of the Architect of the Capitol inspects a damaged entrance of the U.S. Capitol January 7, 2021 in Washington, DC. The U.S. Congress has finished the certification for President-elect Joe Biden and Vice President-elect Kamala Harris’ electoral college win after pro-Trump mobs stormed the Capitol and temporarily stopped the process. (Photo by Alex Wong/Getty Images)

The woman shot dead inside the U.S. Capitol on Wednesday has been identified as U.S. Air Force veteran Ashli Babbitt, 35. A U.S. Capitol Police officer shot the San Diego native in the chest as rioters loyal to President Donald J. Trump stormed the building. She died despite paramedics performing CPR, according to Capitol Police Chief Steven A. Sund, who called his officers’ performance during the siege “heroic.”

Three other people died on the grounds of the Capitol due to “medical emergencies,” police said.

In the wake of Wednesday’s violence at the seat of America’s legislative power, members of the House Judiciary Committee, which normally prepares articles of impeachment, instead sent a letter to Vice President Michael R. Pence late at night calling on him to invoke the 25th Amendment to remove Trump from office. That constitutional amendment includes a mechanism for removing presidential powers from a leader whose Cabinet deems him unfit to serve.

Members of the committee also issued draft articles for impeachment on Thursday. Representative Alexandria Ocasio-Cortez (D-N.Y.) called for Congress, which was not scheduled to meet again until after the Jan. 20 inauguration of President-elect Joseph R. Biden, to reconvene in an emergency session to consider the articles should the vice president not use the 25th Amendment to remove Trump from office.

If Trump were impeached in the House and convicted in the Senate, he would be unable to run for any federal office again.

NEW: I am circulating Articles of Impeachment that @RepTedLieu, @RepRaskin and I have prepared to remove the President from office following yesterday's attack on the U.S. Capitol. pic.twitter.com/b92GL9Ap33

If the 25th amendment is not invoked today, Congress must reconvene immediately for impeachment and removal proceedings.

The rioting in the U.S. Capitol building left the world in shock.

Video circulating on social media showed Babbitt, the Air Force veteran from San Diego, climbing onto an indoor ledge near a doorway before a single gunshot is heard. She slumps to the floor, with a tactical officer pointing his rifle in one direction and bystanders shouting, “Active shooter!” in the other.

Acting Chief of Police Robert J. Contee said Capitol Police asked him to send officers to “help regain control of the U.S. Capitol.” He told reporters on a conference call: “These were not peaceful protests. Today what we witnessed was unlawful, riotous behavior.” Contee said police had seized at least five firearms and arrested 13 people.

But protesters controlled the corridors of power for four tense hours, angered by the prospect of Trump losing his last grasp on the presidency. Some battled with police on blood-streaked pavement while waving flags that announced their support for him. On one of the Capitol’s brass-lined exterior doors, the magic-markered words “Murder the Media” played on TV screens as they streamed out before a city-imposed curfew took effect.

In the first chaotic moments Capitol Police officers stood in the House chamber with guns drawn. Members of the House of Representatives were ordered to put on escape hoods and take shelter. Protesters swarmed police outside, breaking through their ranks and toppling barricades.

Vice President Pence was rushed out of the Senate chamber where he was presiding over a debate about Republicans’ objections to electoral votes from Arizona. He returned in the evening to continue the session.

Five other states’ votes were expected to draw similar objections, each with a two-hour window for debate. But the Senate was formally in recess before the debate could end, with an unidentified gas wafting down the hallway from the ornate Senate chamber. Senators were told to reach under their seats and pull out gas masks, a Cold War carryover precaution, and to evacuate.

With the smell of smoke lingering indoors nearly six hours after the uprising began, it appeared less likely that Republicans would put up a fight.

C-Span footage showed some protesters marching through the Capitol Rotunda in an orderly line, careful not to stray outside a walkway bordered by velvet ropes. One man was captured in a tweeted photo sitting at Pelosi’s desk in the Speaker’s Office, grinning. The office was left vandalized.

The cold, overcast Wednesday began with a rally on the Ellipse, just south of the White House, and Trump addressing a sea of thousands just before noon.

In the final days of his presidency Trump and his allies have focused on disrupting the election certification process that unfolded Wednesday, his last legal avenue to remain in office. “We’re going to have somebody in there [the White House] who should not be in there and our country will be destroyed,” Trump said, referring to Biden.

Trump told his supporters to walk to the Capitol to “cheer on” GOP senators who were objecting to swing-state slates of presidential electors. He urged them, “Lets walk down Pennsylvania Avenue,” but returned to the White House instead of joining them. By the time he tweeted a demand for calm and order, Capitol Police had retreated in the face of an overwhelming force carrying signs and shouting slogans.

Some protesters were heard chanting, “Bullshit! Bullshit!” — the same refrain that broke out on the Ellipse after Trump used that word to describe the election he lost.

Wednesday’s chaos unfolded a day after hotly contested U.S. Senate elections won by Democrats who now have enough seats to take over both chambers of Congress. An hour before Trump supporters stormed the Capitol steps, the president was lavished with their cheers just two miles away.

Outside the White House about an hour after the first rioters forced their way into the Capitol, a heavy-coated Trump recorded a one-minute video pleading for peace despite losing what he called “a fraudulent election.”

Twitter later locked Trump’s account — a first for the social-media-dependent leader — and ordered him to remove the video and two other tweets, because he continued to claim he beat Biden. Facebook banned him for what it said was an indefinite period of time, an usually strong response from that social media platform.

Speaking at the rally, Trump roused his supporters’ passions while Republicans prepared to argue against accepting electoral vote totals from states where they believe elections were rife with fraud. “We’re going to try and give our Republicans, the weak ones,” he said, “because the strong ones don’t need any of our help. We are going to try and give them the kind of pride and boldness that they need to take back our country.”

So they marched to the Capitol, wreaking havoc at one end of Pennsylvania Avenue while the president sat at the other end planning his final moves from the Oval Office.

In a joint statement, Pelosi and Senate Minority Leader Chuck E. Schumer called on Trump “to demand that all protestors leave the U.S. Capitol and Capitol Grounds immediately.” Biden, just two weeks from taking office, said: “It borders on sedition, and it must stop now. I call on President Trump to go on national television now to fulfill his oath and defend the Constitution and demand an end to this siege.”

«Previous Post
Before the Capitol Riot, a Sea of Thousands of Trump Supporters Gathered»Next Post
Assassination of Iranian Nuclear Scientist Could Hamper Biden’s Ability to Negotiate with Tehran