Before the Capitol Riot, a Sea of Thousands of Trump Supporters Gathered

An historic, deadly day began with MAGA Country descending on Washington to hear the president who would encourage them.
By K.B. Mensah January 7, 2021
Facebook
Twitter
Linkedin
Email 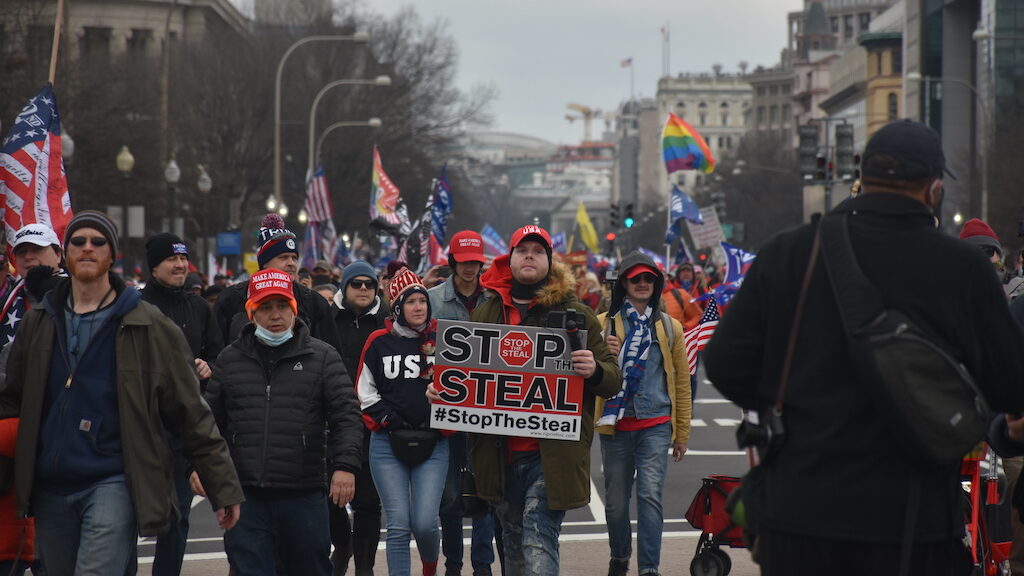 Nine hours before their political movement would begin to self-immolate amid broken windows and gunfire, supporters of President Donald J. Trump — including those who stormed and breached the U.S. Capitol building — gathered on the grass to the south of the White House.

It was 5:00 in the morning. Uneventful but full of promise: Trump himself would speak before lunch, and the “Stop The Steal” movement sensed momentum in Congress to press “pause” on the process of certifying electoral college votes from all 50 states.

His personal attorney, Rudy Giuliani, spoke before the main event, challenging Democrats to “trial by combat” over the question of voter fraud. Donald Trump Jr. warned lawmakers who weren’t sufficiently loyal to his father that election doom awaited them. “We’re coming for you,” he said.

The president spoke behind bulletproof panels, surveying thousands of hat-wearing, flag-waving fans, a bigger crowd than the group that heard him speak Monday in comparatively balmy Georgia. He dared TV cameramen to pan from side to side and show the immensity of his political power. He laid into America’s electoral process, the Democratic Party and Republicans who failed to help him overturn the results of Nov. 3.

And in what may have been his last iconic MAGA moment, he urged thousands to “walk down to the Capitol. And we are going to cheer on our brave senators and congressmen and women, and we are probably not going to be cheering so much for some of them. Because you will never take back our country with weakness.”

The brave ones, he said, were the senators who planned to object, one by one, to the electoral votes of a half-dozen swing states where he continues to believe he beat President-elect Joseph R. Biden Jr.

By 6:00 in the evening a woman was shot to death, police confiscated five firearms from the protest mob, dozens of Capitol windows were broken, the House Speaker’s office was vandalized, smoke wafted through the Senate corridors, 13 people were arrested and Trump’s name was mud.

In the final days of his presidency, he and his allies have focused on disrupting the election certification process long enough to prove he was cheated at the polls. But hemorrhaging two Senate seats in Georgia run-off elections on Tuesday, enough to turn the formely all-powerful Mitch McConnell into a minority leader, was a powerful backdrop for the day’s events.

In Georgia, a once-reliable Republican state, Democratic candidates Raphael G. Warnock and Jon Ossoff unseated Republican incumbents Kelly R. Loeffler and David A. Perdue in what were the two most expensive Senate races in history.

Loeffler and Perdue “never had a chance,” Trump said Wednesday, arguing that the fix was in. “If this happened to the Democrats, there’d be hell all over the country going on,” he said.

Trump also lashed out at Georgia Gov. Brian Kemp, a Republican, saying he was a “bad candidate” whose political fortunes in 2018 turned around only when Trump himself campaigned for him. Kemp, he said, was to blame him for Georgia Republicans’ setbacks.

But his own election was on his mind more. “We’re going to have somebody in there [the White House] who should not be in there and our country will be destroyed,” he said of Biden. And he challenged his own vice president, Michael R. Pence, from a distance, daring him to decline to accept the electoral votes at face value.

“I hope you’re going to stand up for the good of our Constitution and the good of our country,” Trump told an audience of one. “And if you’re not, I’m going to be very disappointed in you.”

The crowd squealed and hollered.

But while Trump spoke, Pence’s office released a letter to Congress that shut the door on any chance of him interfering. “It is my considered judgment that my oath to support and defend the Constitution constrains me from claiming unilateral authority to determine which electoral votes should be counted and which should not,” Pence wrote.

Prominent Trump supporters, including some catching only the tail end of the wave, signaled their intent to carry the mantle of “Trumpism” regardless of the day’s outcome.

Madison Cawthorn, the youngest member of Congress, spoke onstage about the rising of a “new Republican party.” He scorched GOP officials who hadn’t risen to object to electoral votes presented by Arizona, Georgia, Michigan, Nevada, Pennsylvania and Wisconsin. “They have no backbone,” Cawthorn said.

The sea of faces, mostly unmasked, roared and cheered.

Two miles down Pennsylvania Avenue, a less festive moment in history was taking shape. Not long after crowds surrounded the Capitol building, protesters-turned-rioters smashed windows and pushed through heavy doors and made their way into the building.

The U.S. Constitution gives Congress an important task: Finalize the election process by reading, counting and certifying the electoral votes.

Pence felt pressure from both Trump and their common base, and he was still tasked with presiding over the final count when the dust settled. the Joint Session of Congress reconvened at 8:00 p.m., barely 6 hours after the tide turned.

By then White House aides began to make their exits. A deputy press secretary. First lady Melania Trump’s chief of staff. The social secretary. The president’s TV viewing habits, no matter what the channel, put rumors in his path about a second impeachment or using the 25th Amendment to the U.S. Constitution to declare him unfit for office just two weeks before his term ends.