With Senate Wins in Georgia, Biden to Take Office While Democrats Control All of Congress

One Democratic challenger won his Georgia special election and another is poised to pull off a second upset.
By Paul Brandus January 6, 2021
Facebook
Twitter
Linkedin
Email 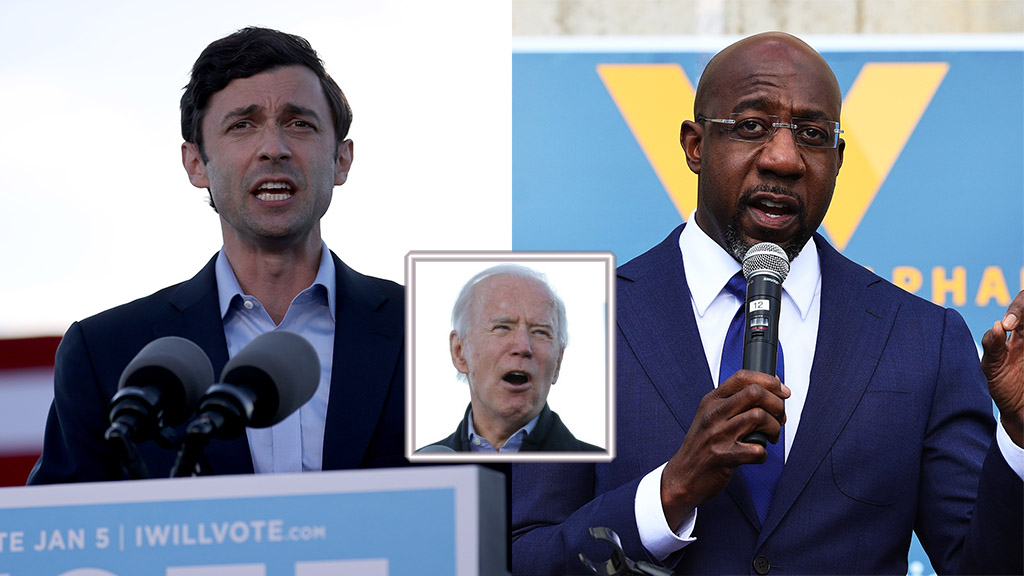 WASHINGTON — Two Democratic Senate hopefuls appear to have squeaked out victories Tuesday in Georgia, throwing Republicans in Washington into disarray just weeks before President Donald J. Trump rides into retirement on a golf cart. And Americans nervous about upsetting the delicate balance of a divided Congress will likely get fatter pandemic stimulus checks to dull the shock.

Democrat Raphael G. Warnock defeated Sen. Kelly L. Loeffler (R-Ga.) by about 46,500 votes, just 1 percentage point, according to unofficial totals. Democrat Thomas J. “John” Ossoff overcame a six-digit deficit to slip ahead of Sen. David A. Perdue Jr. (R-Ga.) at night’s end by a 9,500-vote margin. That race was considered too close to call with 97% of the votes counted and two-tenths of a percentage point separating the two men.

Former Vice President Joseph R. Biden Jr. is just two weeks away from replacing Trump at the White House. He has said he would take immediate advantage of a Democrat-controlled Senate to give eligible Americans $2,000 each to counteract the crushing economic impact of Covid-19. Trump agitated for the same amount but managed only to get $600 payments through the Republican Senate, putting him in rare alignment with high-spending congressional Democrats.

Now Senate Majority Leader Mitch McConnell (R-Ky.), who rebuffed Trump’s request for more than triple the planned Covid-19 checks, will likely cede his office to Minority Leader Chuck Schumer (D-N.Y.). Both parties will control 50 seats in the 100-member upper chamber of Congress if Ossoff holds on to his narrow lead over Perdue; but as the new vice president, Sen. Kamala Harris (D-Calif.) will have the tiebreaking ceremonial role that Vice President Mike Pence has enjoyed for the past four years. California Secretary of State Alex Padilla will serve the final two years of Harris’s Senate term.

It’s one example of the new era in store for America’s political class: Speaker Nancy Pelosi (D-Calif.) has maintained her control of the House of Representatives, Schumer is poised to helm the Senate on the other side of the ornate Capitol Rotunda, and Biden’s arrival at 1600 Pennsylvania Avenue will cement his party’s power until at least 2022.

The trio, whose mean age is 76 years — Schumer’s youth, at just 70, dragged down the average — are eager to have their way. Elections, as President Trump himself has often said, have consequences.

A renewed Republican Senate majority might have spelled doom for much of Biden’s agenda, with expensive initiatives that require tax increases on both corporations and the super wealthy. Republicans warn that higher taxes would be a drag on economic growth. Had they maintained Senate control, Biden’s tax-hiking legislative proposals would have been dead on arrival.

Biden’s nominees for Cabinet posts and federal judgeships will expect easier paths to confirmation. His hand-picked allies will grasp the levers of power, as Trump’s did in 2017, thanks to Democratic chairmen of powerful committees that grill nominees.

Treasury secretary nominee Janet Yellen, for instance, will have room to run with her advocacy for the Federal Reserve to have a broader hands-on role in responding to the economic crisis. That has rubbed many Republicans the wrong way, even though Yellen split her time at the helm of the Fed between the administrations of Trump and his predecessor, President Barack H. Obama.

There’s little the GOP can do about it now.

Georgia’s contests, both runoffs between candidates who failed to get a majority of votes on Nov. 3, came on the eve of a congressional showdown before a Joint Session of Congress. As many as half of the Republicans, including at least 14 senators, plan to object to electoral votes submitted by states where they believe Trump was cheated.

Had this been a typical election, Vice President Michael R. Pence would have opened envelopes from all 50 states, in alphabetical order, and handed the contents to a bipartisan quartet from both the House and Senate. After 50 recitations of the certified totals, Pence would announce the results. But lodging formal challenges will force both houses of Congress to adjourn for “not more than two hours” of debate, according to the Congressional Research Service. Members are expected to rise for no more than five minutes apiece.

Simple majorities are required in both the House and Senate to sustain or defeat each objection. So Republicans’ efforts to cling to power will likely meet the buzzsaw of a slim but effective Democratic House majority.

Campaigning in Georgia Monday night, President Trump repeated his long-running claim that Biden’s victory was a fraud. “I had two elections,” he told a screaming throng. “I won both — it’s amazing — and did better on the second one.”

On Tuesday Trump claimed that Pence “has the power to reject fraudulently chosen electors.” But Trump’s efforts have been thwarted in dozens of court rulings, many from Republican judges; and the U.S. Supreme Court, including three justices hand-picked by Trump, have yet to hear a case that could sway the outcome.