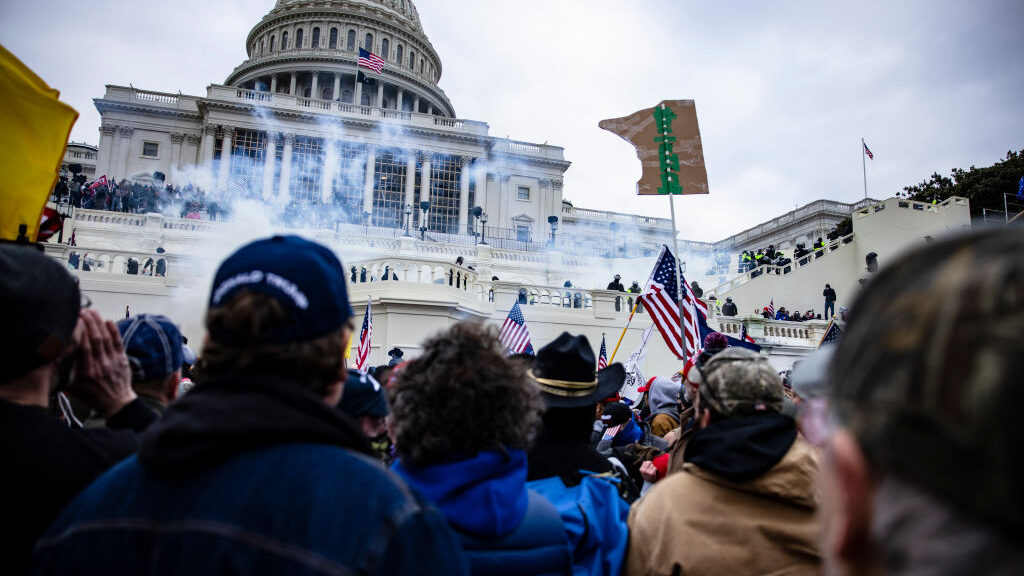 The U.S. Capitol was on lockdown Wednesday afternoon following a breach by hundreds of protesters who battled with police on blood-streaked pavement while waving flags that announced their support for President Donald J. Trump.

U.S. Capitol Police officers stood in the House chamber with guns drawn. Members of the House of Representatives were ordered to put on escape hoods and take shelter. Protesters swarmed police outside, breaking through their ranks and running riot.

One woman was shot in the chest, U.S. Capitol Police confirmed, and 13 arrests were made. Vice President Michael R. Pence was rushed out of the Senate chamber where he was presiding over a debate about Republicans’ objections to electoral votes from Arizona.

Five other states’ votes were expected to draw similar objections, each leading to debates of up to two hours in the House and Senate. But the Senate was formally in recess before the debate could end, with an unidentified gas wafting down the hallway from the ornate Senate chamber. Senators were told to reach under their seats and pull out gas masks, a Cold War carryover precaution, and to evacuate.

C-Span footage showed other protesters marching through the Capitol Rotunda in an orderly line, careful not to stray outside a walkway bordered by velvet ropes. One man was captured in a tweeted photo sitting at Pelosi’s desk in the Speaker’s Office, grinning. The office was vandalized.

Wednesday’s chaos unfolded a day after hotly contested U.S. Senate elections won by Democrats who appear to have enough seats to take over both chambers of Congress. An hour before Trump supporters stormed the Capitol steps, the president was lavished with their cheers on the Ellipse, south of the White House, just two miles away.

He urged them, “Lets walk down Pennsylvania Avenue,” and returned to the White House instead of joining them. By the time he tweeted a demand for calm and order, Capitol Police had retreated in the face of an overwhelming force carrying signs and shouting slogans.

Some were heard chanting, “Bullshit! Bullshit!” — a refrain that broke out on the Ellipse after Trump used that word to describe the election he lost.

Outside the White House an hour later, a heavy-coated Trump recorded a one-minute video pleading for peace despite losing what he called “a fraudulent election.”

Trump roused his supporters’ passions as some Republicans argued against accepting electoral vote totals from states where they believe elections were rife with fraud. “We’re going to try & give our Republicans, the weak ones,” he said, “because the strong ones don’t need any of our help. We are going to try and give them the kind of pride and boldness that they need to take back our country.”

So they marched to the Capitol, wreaking havoc at one end of Pennsylvania Avenue while the president sat at the other end planning his next move from the Oval Office.

In a joint statement, Pelosi and Senate Minority Leader Chuck E. Schumer called on Trump “to demand that all protestors leave the U.S. Capitol and Capitol Grounds immediately.”

Biden, just two weeks from taking office, said: “It borders on sedition, and it must stop now. I call on President Trump to go on national television now to fulfill his oath and defend the Constitution and demand an end to this siege.”

An explosive device was also found near the Republican National Committee headquarters in Southeast Washington. It was safely detonated.