Farmers have been protesting for months against new laws they claim will cost them income and empower corporate entities.
By Jitendra Choubey January 5, 2021
Facebook
Twitter
Linkedin
Email 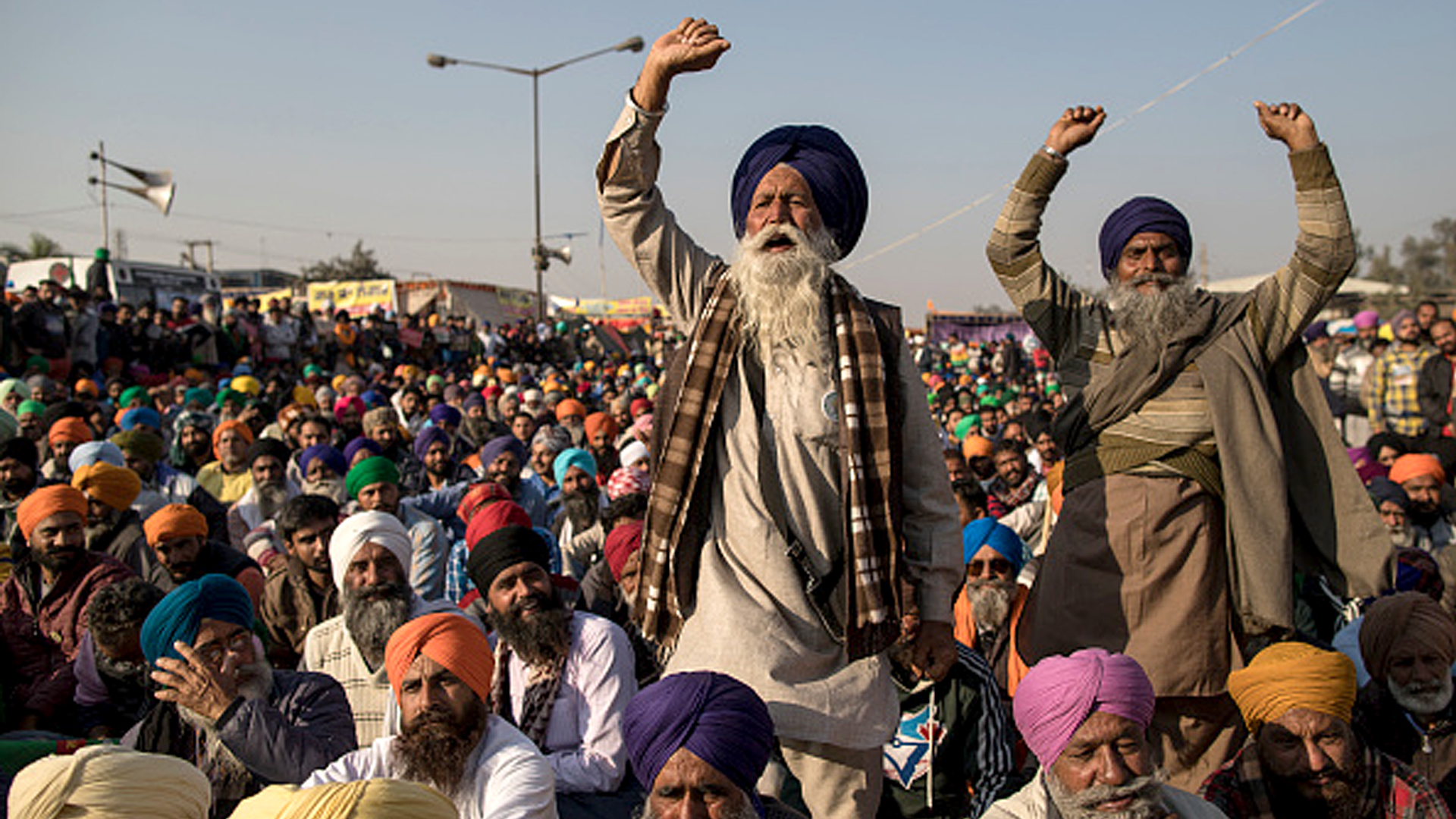 Farmers shout slogans as they participate in a protest at the Delhi Singhu border on December 18, 2020, in Delhi, India. Hundreds of thousands of farmers from surrounding states have been protesting on the outskirts of Delhi for weeks, blockading highways leading to the capital. Farmers say they are protesting against laws that deregulate the sale of crops, which they say will put them at risk of losing their livelihoods and land to big corporations. The government has said that the reforms are necessary to improve the efficiency of the agricultural sector, which is heavily dependent on government subsidies to survive. (Photo by Anindito Mukherjee/Getty Images)

NEW DELHI — Seven U.S. lawmakers have weighed in on the months-long protests by farmers across India, urging U.S. Secretary of State Mike Pompeo to raise the issue of farmers’ demands with the Indian government.

In their letter to Pompeo on Dec. 23, the lawmakers said that Indian-Americans, especially Sikhs, are among those affected as their families work in agriculture. Family members of many Sikh Americans live in Punjab, where the protests started against three new farm laws. The laws encourage the dissolution of community markets and the removal of the minimum support price for farmers.

Democrat Reps. Pramila Jayapal, Mary Gay Scanlon, Debbie Dingell, Donald Norcross, Brendan F. Boyle and David Trone, and Republican Rep. Brian Fitzpatrick submitted the letter, urging Pompeo to counsel the Indian government on recognizing the rights of those in India and abroad who are protesting peacefully against the new laws.

In a press statement on Dec. 21, Trone said: “I am greatly concerned by reports of violence used against protesters as they convened in New Delhi, and I am saddened to hear that some have died due in part to harsh weather conditions as they maintain their presence despite the elements. I call on India’s government to demonstrate its commitment to democratic norms by guaranteeing protesters’ safety and by treating them with respect.”

Thirty protesters died during the severe cold wave that swept through New Delhi and neighboring states. Delhi recorded a low 3.4 degrees Celsius (38 degrees Fahrenheit) on Dec. 20, according to the Meteorological Department. Normal temperature is 8.4C (47F).

Farmers from northern states of Punjab, Haryana, Uttar Pradesh, Uttarakhand and Rajasthan have been protesting on the outskirts of the capital New Delhi since late November, though small scale protests started in Punjab in August. Police have kept the protesters out of the capital city. The farmers are demanding that government roll back the three new laws passed in September.

The government said the laws will help farmers by providing direct access to retailers to buy their crops, and eliminate the middlemen. Farmers say the laws will only make them more dependent on corporate giants.

Additional support for the farmers came on Dec. 9 from U.S. Rep. John Garmendi, co-chair of the American Sikh Caucus, and caucus members Reps. Jim Costa and Sheila Jackson Lee. They sent a letter to Taranjit Singh Sandhu, ambassador of India to the United States, expressing their solidarity with protesting farmers and defending their right to peacefully protest.

The Sikh diaspora in the UK and Canada have also brought the plight of the farmers to the forefront. Farmers are urging Indian-origin member of parliament in the UK to call off Prime Minister Boris Johnson’s visit to India on Jan. 26, 2021.

Canadian Prime Minister Justin Trudeau has extended his support to the protesters. Trudeau’s government has four ministers of Indian origin, and the country’s parliament has 18 members from the Sikh community — the majority religion in the state of Punjab.

Earlier this month, the Indian government rejected remarks by foreign leaders on farmers’ protests as “ill-informed” and “unwarranted.”

During a virtual address on Dec. 25 to 90 million farmers, Prime Minister Narendra Modi made it clear that the farm laws will stay. He emphasized the benefits of the new laws and blamed opposition parties for creating confusion among farmers.

Modi said that “Rs 18000 crore ($2.47 billion) have been deposited directly in the bank account of more than 9 crore (1.3 million) farmer families in the country at the click of a button today,” and that “since this scheme started, more than 1 lakh 10 thousand crore rupees have reached the account of farmers.”

“The prime minister expressed regret that more than 70 lakh farmers of West Bengal have not been able to get this benefit. He said over 23 lakh farmers of Bengal have applied online to take advantage of this scheme. But the state government has stopped the verification process for so long,” a statement on Modi’s website says.

“The prime minister thanked all the farmers across the country who have fully supported and welcomed the agricultural reforms and assured that he will not let them down.”

India has been going through an agrarian crisis for a few years. There has long been a demand for reform in the current marketing system in which traders often suppress the price when produce reaches designated market under Agriculture Produce Marketing Committee (APMCs).

To prevent distress among farmers, the government intervenes during harvest season and announces a minimum support price (MSP) for 23 agricultural products to the APMC-designated market. The MSP ensures agricultural producers are protected against a sharp drop in price.

The new farm laws are intended to provide greater market opportunities to farmers, the government says. The laws have removed away MSP, grains procurements, and check hoarding.

“Currently, APMCs are governed by the state government, while new law empowers the national government,” said Jean Drèze, an economist and activist. “This dual arrangement will not favor farmers.”