Enthusiasm of API fellow could land him one of the 800,000 jobs projected for the sector by 2030. 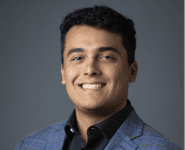 Daniel Valdés is a 22-year-old born in Texas to Mexican parents. As a child, he watched full of enthusiasm and childhood glee the wind turbines in his native state every time his family drove by through the vast fields where these massive constructions laid.

That same fascination with power generation would later nurture a concern for the environment and the natural phenomena that he experienced in his hometown of Galveston. He decided that he wanted to be in a place where eco-friendly energy policies could make a difference.

Today he is a chemical engineer, recently graduated from Columbia University in New York amidst the global Covid-19 pandemic. He got the opportunity to be a public policy fellow at the American Petroleum Institute (API) until December. From there, he went through the House of Representatives as part of the Public Policy Fellow of the Congressional Hispanic Caucus Institute (CHCI.)

“I have had several experiences in the Gulf of Mexico, most recently, Hurricane Harvey, which hit Houston hard. It was one of the worst hurricanes, just after Katrina. There are wildfires in California, and in different parts of the world, the winter is extremely cold. The important thing to consider is that with the changes that we will see in the following 10, 15, 20, or 100 years, there will be a real need to lower carbon emissions.”

Nowadays, the energy industry seeks to broaden its diversity to include minorities such as African Americans and Latinos such as Valdés. The Community Energy Center (CEC) emerged to provide information and perspectives on the sector’s role in these communities. It also provides a forum that raises awareness, understanding, and discussions about the energy sector’s importance in their everyday lives.

Thus, the industry’s projection regarding the recruitment of these ethnic and racial minorities is positive. It is thanks to this that young people like Valdés should have more significant opportunities.

“The CHCI Public Policy and Graduate Fellowship Programs provide an unmatched leadership experience for the brightest and most innovative emerging leaders in our community. Through our program, they acquire in-depth knowledge of highly relevant topics and industries, such as energy. This, combined with induction into an incredible network of peers and established leaders, gives CHCI fellows a boost to their careers, advances the Latino community, and strengthens the nation,” said Marco Davis, CHCI president and CEO.

In Valdés’ view, diversity is essential in any industry to have minorities represented in the decisions that also impact these communities. He is confident that the only way to know the minorities’ perspective on these subjects is to allow them to form part of the decisions and get involved in them.

“Without a science program, I would not have had the opportunity to know how energy policies operate from the perspective of the organization that is in charge of American oil. It is a perspective that I appreciate very much, as I did not know about it,” he said.

According to an API analysis based on the IHS Global Insight report, oil and natural gas will continue to be the primary fuel source for decades to come, while other energy forms will become commercially viable.

There will be an increase in export capacity and more than 800,000 jobs in the energy industry by 2030 under the energy development policies. Of the new jobs created by 2030, African Americans and Latinos could fill more than 285,000 (35%.)

“The energy industry has proven to be a catalyst for economic activity and has long supported members of our communities,” said Dr. Benjamin F. Chavis Jr., president and CEO of the National Publishers Association of Newspapers (NNPA) in the framework of the joint effort with the National Association of Hispanic Publications Media LLC (NAHP Media) for the launch of the Community Energy Center.

Ricardo Hurtado, president of media for NAHP Media, endorsed Chavis’ view and pointed to the crucial role of this new organization in “the path to the creation of new careers and professional development opportunities” for minorities.

Valdés, who completed his bachelor’s degree with scholarships and a lot of effort from his family, is a clear example of the need for these new policies and fellowships. As the young man aspires to continue training, he is in the process of applying for a master’s degree in chemical engineering and environmental sustainability, with plans to then go for a doctorate in public policy. He has also not ruled out knocking on the API’s doors again, once his education is complete.

Valdés is optimistic about the future of the energy industry in terms of diversity and sustainability. “I would say that I see a transition from fuels to renewable energy. Regarding the oil industry, I see a more diverse future in terms of gender, race, and color.”

During his stay at the API, Valdés drew satisfaction from the work he did in the institution’s programs, both in English and Spanish, which focused on guiding high school students and their parents in STEM and other university study areas.

The CEC promotes the empowerment of minorities and raises awareness about the environment and the need to make energy affordable in minority communities.

To learn more about the Community Energy Center’s work and to receive information about their work, visit www.communityenergycenter.org. To learn more about the scholarship and leadership programs offered by CHCI, which has an application deadline on Jan. 15, visit https://chci.org/programs/public-policy-fellowship-program/.

(Translated and edited by Mario Vázquez. Edited by Matthew B. Hall.)