Solano arrived in Chicago from her native Dominican Republic with a single suitcase. Today she owns 15 restaurants. 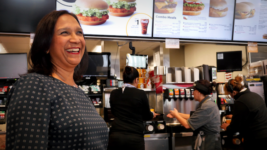 Carmen Solano came to Chicago from her native Dominican Republic with a single suitcase and a huge dream: to become an artist. Today, she is an entrepreneur and the owner of 15 McDonald’s.

When she set foot in Chicago in 1980, Carmen Solano-De Carrier knew she wanted to study broadcasting at Columbia College and pursue a career behind the cameras and microphones.

The 19-year-old was the daughter of Rafael Solano, a famous Dominican musician and composer, and grew up admiring her father. (Rafael Solano composed Por Amor, a song translated into several languages ​​and performed by such artists as Plácido Domingo.)

“My father had a show called Solano. When I was 12, I introduced people to the show. From that time, I loved the microphone, television and being behind the cameras. I sang with my dad, and that’s what I wanted to do,” she said with a smile.

But to fulfill her dreams, she had to work first. Solano did not realize it then, but she chose a job that would set the course for her life.

Solano worked her way up at McDonald’s, from being a cashier to executive positions. While working behind the counter, she met her first husband, married, had children and continued to grow with the company. She was an employee for 23 years, but suddenly her life took a turn, and she became an entrepreneur.

“I divorced my first husband and met my second husband at McDonald’s. He was a department head in the company, and I worked as a consultant for franchise operators. It was then when I learned what an operator was,” she said.

Pregnant with a baby girl and with two decades of experience in the world’s largest restaurant chain, Carmen and her husband decided to buy their first McDonald’s franchise in 2002.

“People in the central office were not very happy because they did not have many Latinos in high ranks in Chicago. They didn’t want us to leave, but they ended up helping us and wished us luck,” she said.

McDonald’s had a rule of thumb at that time: it did not grant Chicago franchises to company employees. So, the couple opened their first two restaurants in Milwaukee, Wisconsin. How did Solano and her husband secure the initial capital? They used money from their 401K and a company loan.

That’s where Carmen started her mini-chain. Later, the possibility arose of opening a restaurant in Chicago, and another came, and another. The couple controls 21 restaurants today, 15 of which belong to Carmen.

“When you become an owner, it’s as if a train passed over you. There are many things that you are not taught as an employee and that you have to learn as an owner,” she said.

People want to work with Carmen

Asked about the challenge of getting 15 restaurants in just 17 years, the businesswoman acknowledges that she has had many challenges, but none harder than finding employees.

“Right now, for all businesses, the most difficult thing is to get the staff. I have been fortunate. Chicago has a large Latino community, and people who come want to work for Carmen, not for McDonald’s,” she said.

The businesswoman attributes it to the special relationship she has with her employees. “I talk a lot with them. We have a very close relationship. I go to different restaurants every day, and I try to get to know them. Some tell me about their personal lives, and I try to help them,” she said. “If they have an emergency, I give them a loan, and they pay me little by little with their check.”

She has built a kind of family that is key when dealing with 15 restaurants simultaneously. “A lot of people have made their way up here, starting from the bottom,” she said. “When I see that they have potential, I send them to classes. McDonald’s has one of the best business training in the world. I didn’t know anything about business because I wanted to be on television. I learned it here.”

Carmen would like to say other businesswomen who are dealing with a myriad of challenges, “As Latinas and women, we have a lot to contribute to a company. We are moms, and ‘we run’ the house business. We are the ones who go to the supermarket with a budget to spend, the ones who usually make the children’s medical appointments, help them with homework. I mean, we know how to plan and that makes things a little easier.”

“As Latinas, we protect our children. We want them to be with us at home. We believe a lot in family life, and we take those ideas into business and make a family. This is what I have done, and I believe that’s why I have done so well,” she said.

“What is the limit of Carmen Solano? Where do you want to go?” we asked her.

“This is something people usually ask me,” she said. I don’t know, because when I started, I didn’t think I would have 15 restaurants. But I’m one of those people who believe that if there’s an opportunity, one has to take it.”