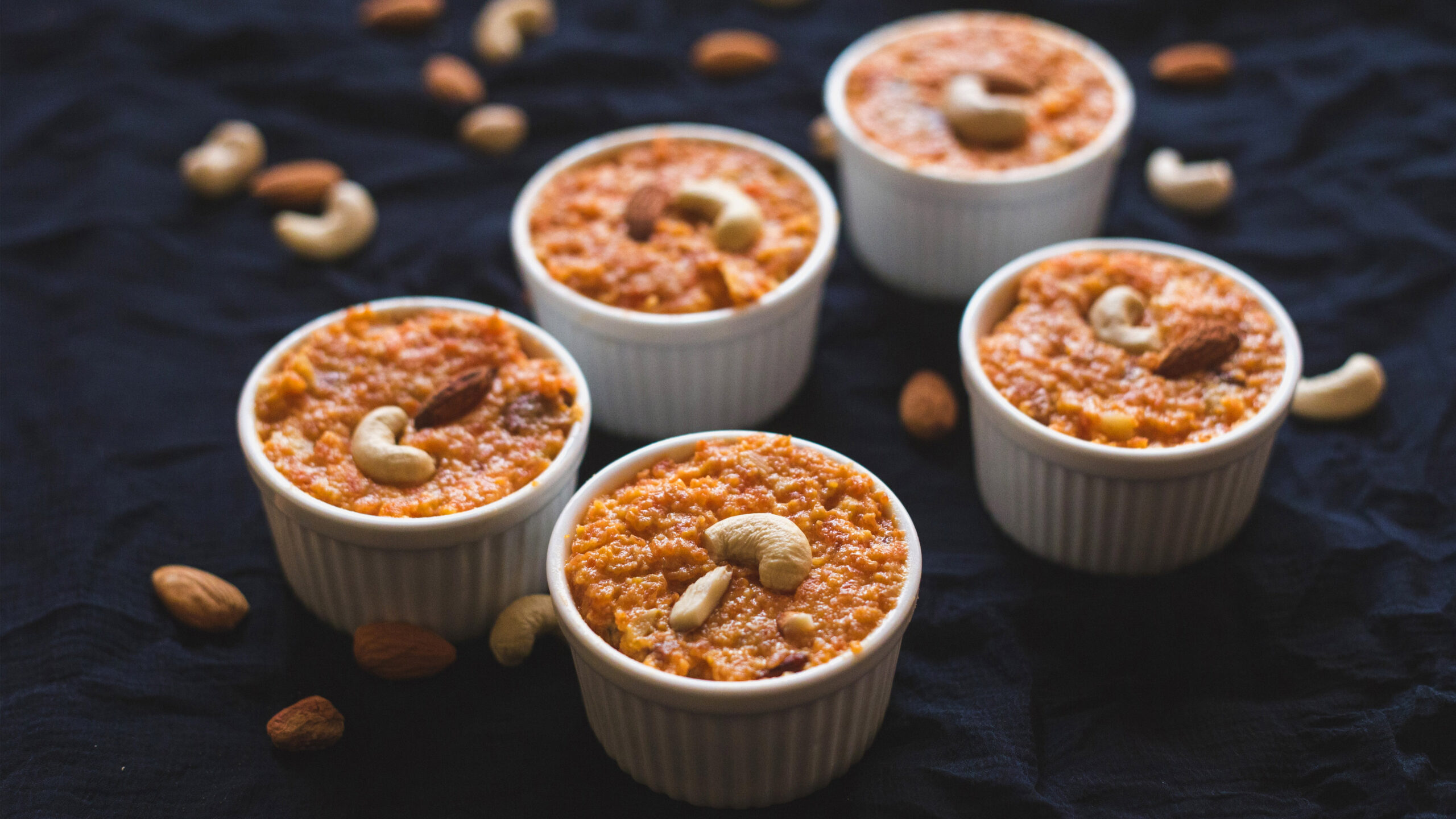 Be it homemade or from street shops, piping hot gajar ka halwa is everyone's favorite in winter. (Courtesy of Arshdeep Kaur)

Gajar ka halwa and winter is synonymous in north India. Made with seasonal carrots, reduced milk, and sugar, this flavorsome winter dessert is had in copious amounts in India, Bangladesh, and even Pakistan to keep the spirits high and the chills away.

Gajorer halwa, gajar pak, and gajrela are a few other names that the dish is known by. It is believed to have originated during the Mughal era, around the 17th century when, the Dutch brought orange-colored carrots to India.

“As children we used to line up in front of the kitchen, waiting for the piping hot halwa to be ladled into our empty bowls,” said Mamta Seth, 57, a resident of Mughalsarai, as she fondly recalled her mother’s gajar ka halwa, redolent with rich desi ghee (clarified butter) and khoya (dried milk solids).

Ghee is added to many Indian winter desserts as it is believed to keep the body insulated and warm.

Originally a Turkish dessert, the ‘helva’ or halwa is available in many forms in Indian kitchens. From semolina to bottle gourd, the versatile ‘halwa’ lends itself to multiple variations.

Apart from carrot halwa, “badaam” and “habshi” are two other halwas that Indians like to indulge in during chilly winters. While the badaam halwa is made using ground almond, saffron, and loads of ghee, habshi halwa is prepared with sprouted wheat and milk.

The habshi halwa — dark brown in hue — derives its name from a Persian word ‘habashi’ that is used for dark-skinned people.

“Whether it’s habshi or badaam or kaali gajar ka halwa (halwa made with black carrots) — the extra use of spices during the winter makes the dessert nutritious and warming,” said Sangeeta Khanna, a food blogger and author of the book “Culinary Culture — Uttar Pradesh.”

Khanna’s personal-favorite is the khuskhus or posta halwa, which is made by sautéing poppy seed paste in ghee, cooking it with milk till thick and adding chopped nuts and sugar to the mixture.

Halwas are also eaten at other times of the year, like religious festivals; however, there are some delicacies that are only found when the temperatures have hit rock bottom.

Malaiyyo is a “must-try” that Khanna recommends all street-food lovers. It is a winter-only “melt-in-the-mouth” dessert sold in the narrow lanes of Varanasi.

“Malaiyyo is a ‘saffron flavored milk cloud’ that is made by churning whole milk early in the morning during winter months by the shopkeepers in the old part of the city who are gwalas (keepers of cows) and produce and sell milk products including yogurt, khoya, butter and ghee depending on seasons. When saffron flavoured milk is churned slowly (manually) it results in the fats separating into a froth that is collected in a large kadhai (a utensil they use for many purposes through the year). Later this frothy cream is sprinkled with finely sliced nuts and saffron to garnish (sic),” Khanna writes on her blog ‘Banaras ka Khana’.

Delhi too has its version of malaiyyo — a legendary wispy confection called daulat ki chaat.

“In the olden days, the dish was mostly eaten by royalty and those with daulat (wealth) — hence the name daulat ki chaat,” said Sanjay Kumar, a shopkeeper at Delhi’s Chandi Chowk area, who has been selling the dessert for 17 years now. Kumar and his brother Pravesh are the third-generation of daulat ki chaat sellers in the family.

“We wake up at 3 am and start beating the froth that gets collected overnight on the churned milk. The beaten froth is mixed with saffron, castor sugar, and grated khoya. It takes us four hours to make one paraat of the chaat,” said Kumar.

A paraat is a large flat vessel that can hold 10 kg of the dessert at a time. The froth beating begins at night and continues till dawn as the dew keeps falling on the milk.

Legend has it that this dessert should be made only on moonlit nights, possibly due to the unavailability of sufficient lighting in the night in earlier times.

These days, some vendors have started using freezers to store the dessert during the day and make it available during other seasons as well, but skeptics claim that the absence of morning dew deprives the dish of freshness and quality.

“Sweets made out of sesame like tilbugga, revari and gajjak too are a great hit during the winters. They are nutritious and provide warmth. These sweets are sticky and can be made only in dry weather, once the monsoon ends.”

Made of sesame seeds, groundnuts and jaggery, gajjak originated in Meerut over a hundred years ago and is now popular across the country. This dessert forms a vital part of Makar Sankranti food festivities, an occasion celebrated to welcome spring and the new harvest season.

Further north in the states of Jammu and Punjab, a dry concoction called “panjiri” is made by roasting whole wheat flour in ghee and adding powdered sugar, nuts and spices to the mix. Poppy seeds, instead of wheat flour, act as the main ingredient in a variation called “sund panjiri.”

“Dry ginger, desi ghee, and lots of dry fruits are used while making sund panjiri,” said Rohit Abrol, a doctor and owner of Pehelwan Sweets, an 84-year-old sweet shop chain in Jammu. “Apart from providing warmth in winters, this highly nutritious sweet is consumed during fasting and pregnancy.”