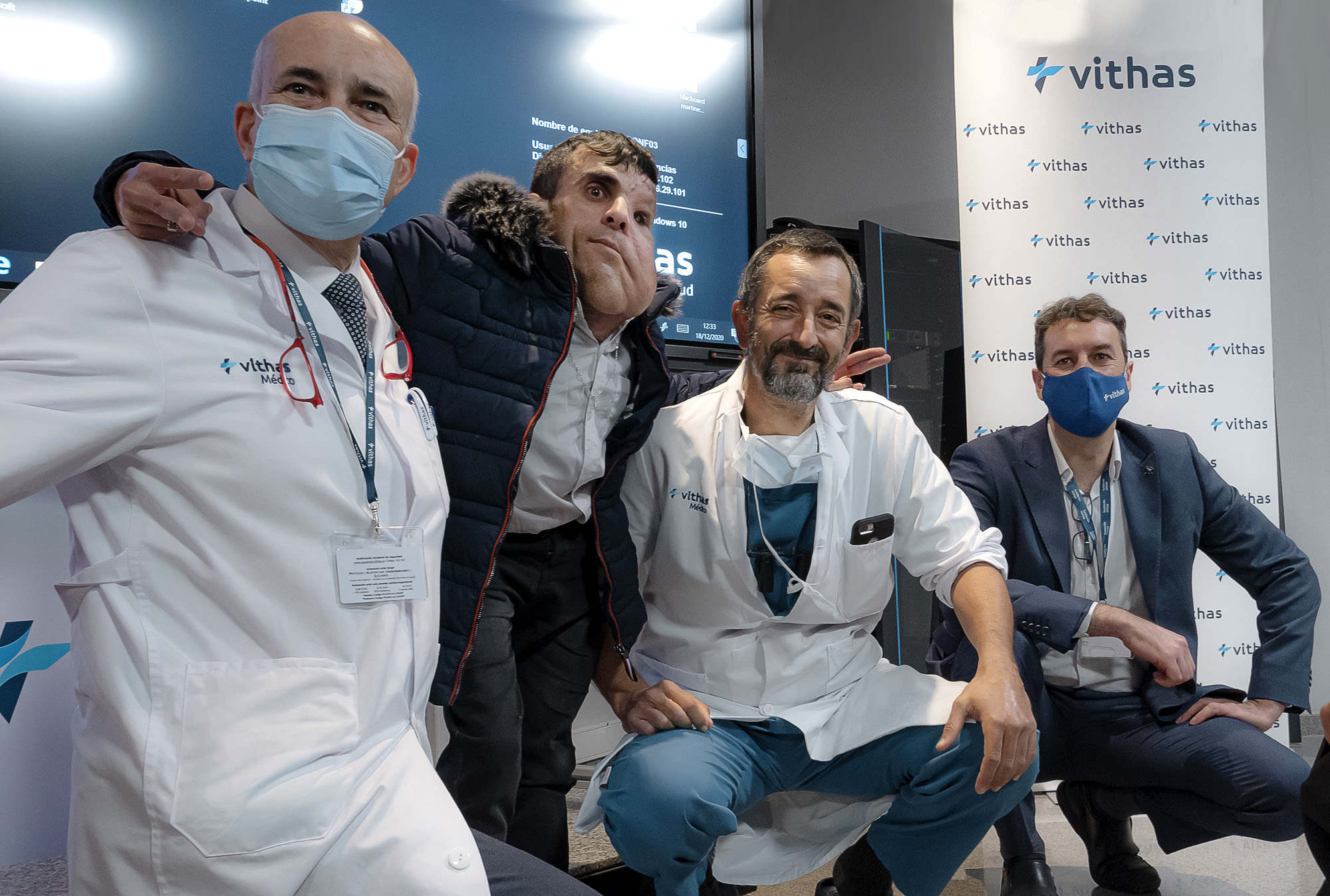 Ali Amnad Rifi with doctor Cavadas (centre) and the medical team during the press conference after the surgery. (Fundacion Vithas/Newsflash)

VALENCIA, Spain — A deformed man whose rare tumor made one side of his face and body look melted has undergone a series of surgeries to give him a more normal life.

Ali Amnad Rifi, 30, from a village in Morocco, suffers from severe neurofibromatosis, which has seriously affected his body.

However, coming from a poor family, he had no means to pay for medical care.

That was until he got an offer of help from a renowned reconstructive surgeon, Dr. Pedro Cavadas, who arranged to bring him to his clinic in Valencia, Spain, a year ago.

By them, Cavadas said the tumor weighed 29 pounds. The final operation to remove it was carried out at the Vithas Hospital in early October.

The surgeon has performed a number of high-profile operations, which made him a household name in Spain, including the transplant of two hands to a female patient.

The doctor agreed to get involved after being contacted by a volunteer of the ADRA Foundation, who informed him of Rifi’s health issues. She found him on the streets of Tangier and realized he needed urgent humanitarian help.

ADRA stated Rifi had no chance of getting the necessary treatment in Morocco.

He was diagnosed with neurofibromatosis type 1, a genetic mutation that occurs in about one out of every 3,500 births. The surgery was complicated by the tumor’s size and the strain it put on his heart and lungs.

“Ali was suffering from the biggest neurofibromatosis we have ever seen. The difficult part was organizing the surgery in stages, because if you remove too much at any one time, the patient could bleed to death,” said Cavadas.

In all, doctors performed three surgeries over the past year to reduce Rifi’s tumor. The first two operations took place between October and December 2019. The last was scheduled for April 24, 2020, but was delayed, due to the COVID-19 pandemic. That last procedure eventually took place in October.

“We have managed the best possible result, taking into account the complexity of the process. Now he is a patient with a normal life, who feels like a rock star, and even has a couple of girlfriends on the back of his newfound fame,” said his surgeon.

However, he warns the tumor could grow back, “as he is still young.” Rifi’s genetic disorder triggers tumors in the body, but “it will not be so extreme as before, and he can be operated again more easily next time.”

“As soon as we were told about the case, we decided to do all the paperwork needed to make Ali Amnad Rifi receive the best treatment possible with the maximum guarantees,” stated Angel Ayuso, director of the Vithas Foundation.

The doctor said some signs of the tumor remain on Rifi’s face; removal is difficult as it could cause facial paralysis.

“I am very happy, I am very lucky to have had the treatment with all the various organizations and individuals involved,” said Rifi at a press conference. “They have made my life considerably better than it was in the past.”