Elena is the second oldest woman in Spain to have recovered from Covid.
By James King December 31, 2020
Facebook
Twitter
Linkedin
Email 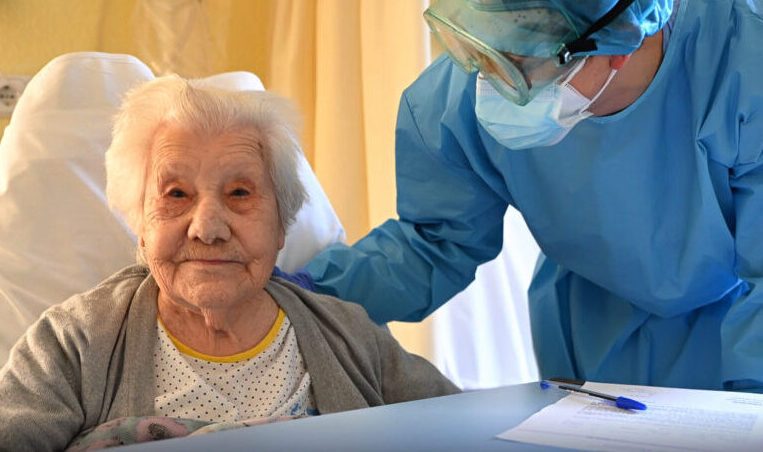 104-year-old Elena in the hospital during her recovery process from coronavirus. (Hosp. Gregorio Maranon/Newsflash)

MADRID, SPAIN — A 104-year-old woman became Spain’s latest centenarian to survive COVID-19 after doctors declared her fit after recovering from the coronavirus recently.

The elderly patient was identified as Elena and released from Madrid’s Hospital Universitario Gregorio Maranon. She was suffering from fever and fatigue symptoms when brought to the hospital.

Elena, who stays alone in Madrid, was greeted with a standing ovation from the hospital staff when she left the premises. She was the oldest patient to be treated at the hospital and the second oldest in Spain. Earlier, Maria Branyas — who is 113-years-old — had beaten the virus back in May.

“Thanks a lot. I wish you good health. Health is everything,” she was heard telling her doctors after being wheeled out of the hospital corridor.

The doctor said that she needed special treatment due to her age, but she never needed a ventilator. “Elena is a survivor, last year she got over influenza A, and this year she survived pneumonia caused by an infection due to COVID-19,” said Dr Alvaro Alejandre de Ona in a press statement.

“Elena is evidence that although patients are old, they can heal and that for us is a real satisfaction,” he said.

The youngest centenarian, Walter Reed said that it was his positive outlook towards life that has helped him reach this far in life. “I have never smoked and I have tried to eat a healthy diet, doing the right things. But perhaps the most important thing is that I never get angry, I try to stay calm and have a good relationship with everyone,” he said.