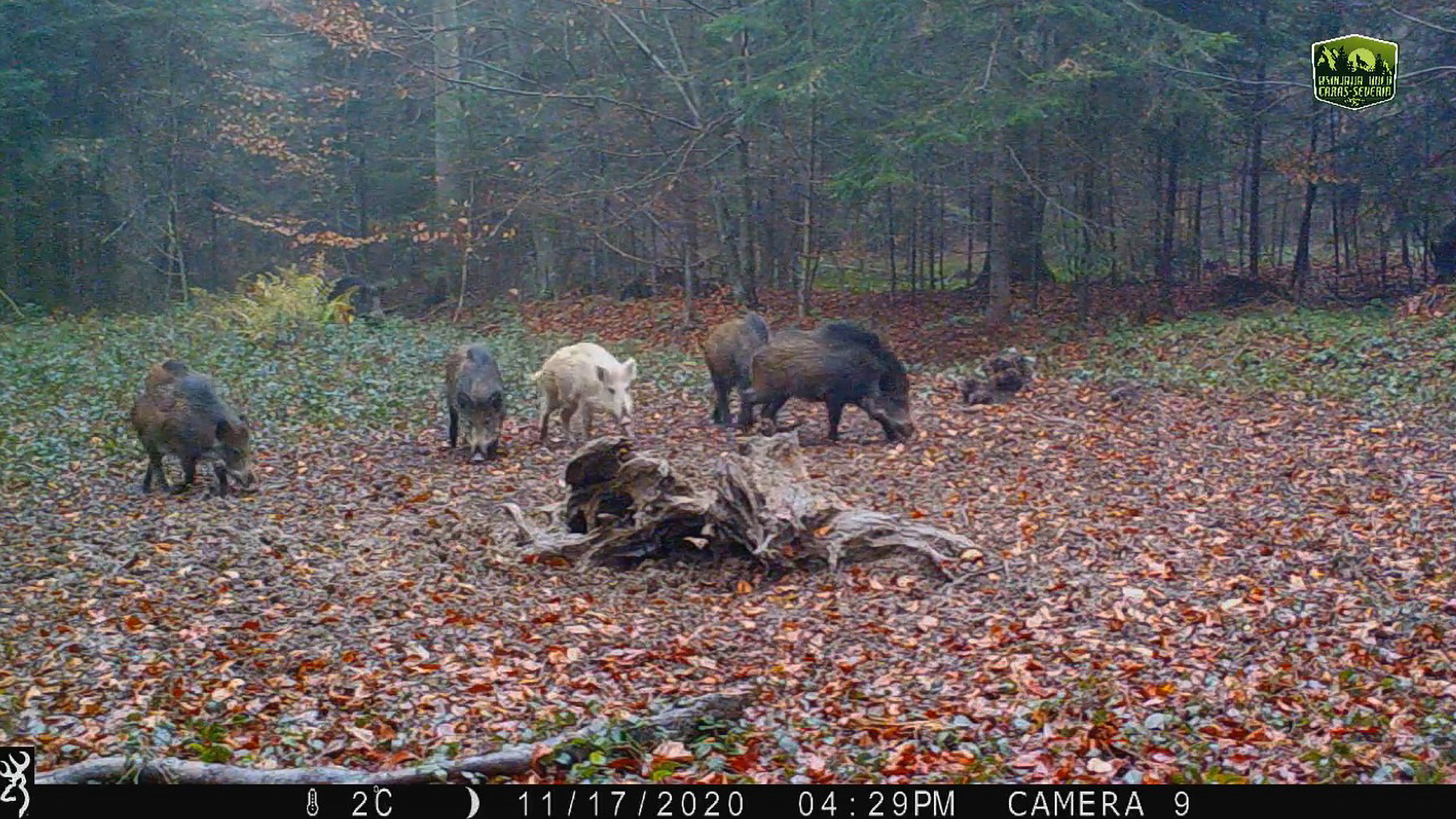 The albino boar eats with other wild boars, a sign it is part of a family group. (@wildcarasseverin/Newsflash)

CARAS-SEVERIN, Romania — A rare white wild boar, once the official emblem of England’s King Richard III, has been captured on film.

Surveillance cameras mounted in a protected area caught the white wild boar in a forest in south-western Romania’s Caras-Severin county in mid-November. The albino boar eats with other wild boars, a sign it is part of a family group.

The animal is a cross between the domestic pig and the wild boar, and it’s more typically seen in Hungary.

Wild Caras-Severin wrote alongside the footage: “Dear friends, as we told you on other occasions, in nature surprises do not take long to appear. The other day we caught a white (albino) wild boar on video. It seems that it is a rather rare phenomenon in our country, it is the second case that we have ever encountered here,” Wild Caras-Severin said.

Biologist Teodora Stinculet saw the images and confirms she believed it to be an albino wild boar with its coloring created by a genetic defect.

“There are two hypotheses. One is that this is a genetic defect, and the other is that it is an albino,” Stinculet said.

Although albinism can be caused by various factors, including living conditions, diet, age, injury or disease, she speculated the “mixed parentage of possibly a domestic pig and the wild boar was probably more likely.”

“Albinism is a congenital disorder characterized by the complete or partial absence of pigment in the skin, hair and eyes, due to the absence or defect of tyrosinase, a copper-containing enzyme involved in the production of melanin,” Stinculet said.

According to statistics published by the country’s Ministry of Waters and Forests, while the optimal number of wild boars in Romania would be around 37,000, it was estimated there were 117,000 wild boars in 2018 and about 99,700 in 2019.

Given its striking appearance, references to the white boar show up in several cultures. In Japan, it is considered a messenger of the fire deity, while Hindus see it as a source of life and fertility.

In England, the white boar was the personal badge of Richard III from 1483 until his death two years later. Shakespeare’s play, “Richard III,” portrays him as a cruel monarch who gave the order to kill his brothers and nephews to secure the crown, though contemporary scholars have redeemed his reputation, in part.

One theory is the boar represented light and purity for Richard III, who chose it to distinguish from the blue boar, the symbol of Edward III, from whom he descends. Richard II was also the last of the Plantagenet dynasty.