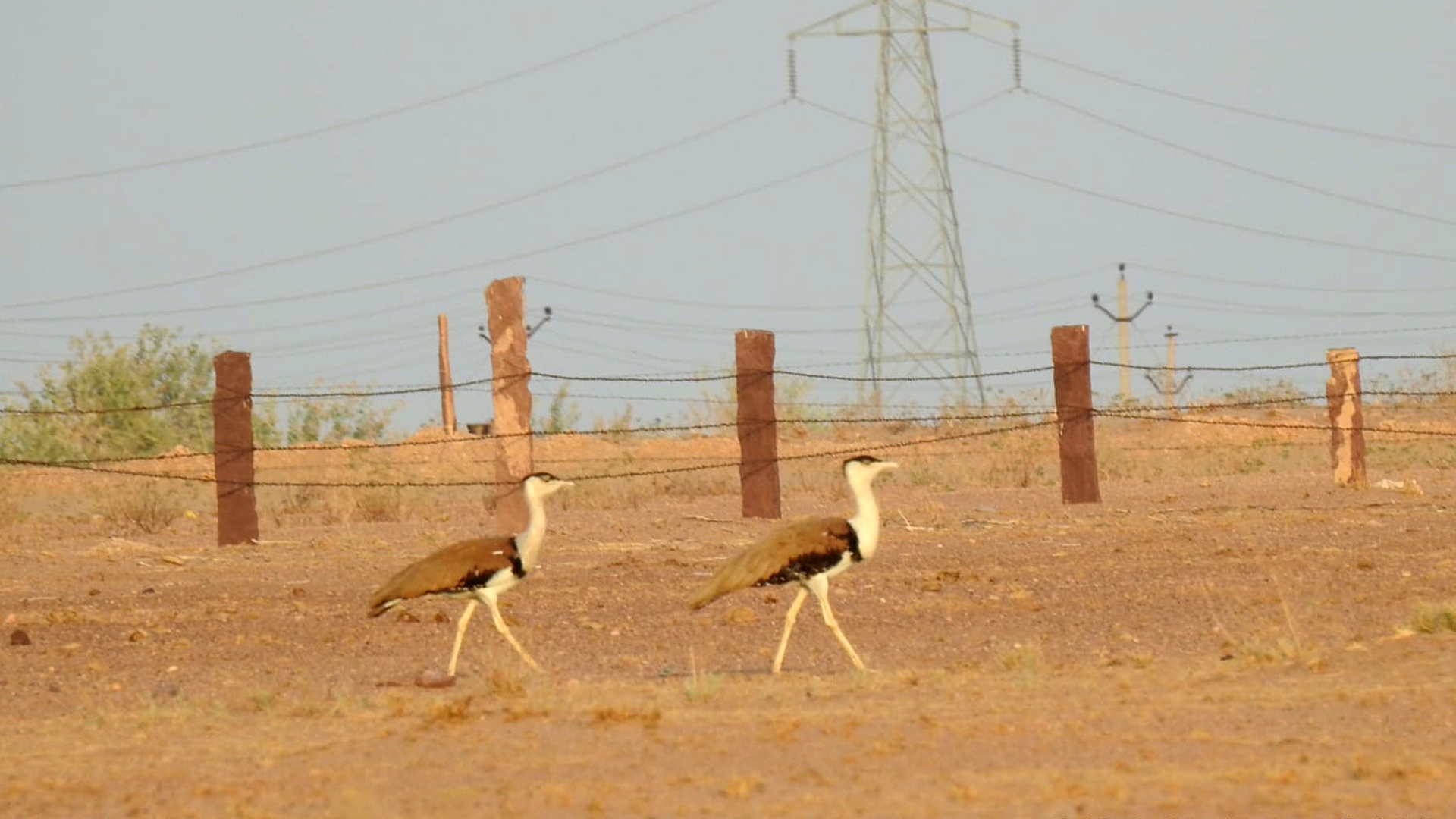 The great Indian bustard is one of the heaviest flying birds in the world. (Wildlife Conservation Society India)

MUMBAI — Thousands of “fireflies” are helping to save the critically endangered great Indian bustard in Jaisalmer, a desert city in the northern Indian state of Rajasthan.

More than 1,800 bird diverters — which from a distance look like fireflies — have been installed on the power lines in Jaisalmer, where the majority of the country’s 150 remaining great Indian bustards live.

A report by the Ministry of Environment submitted to the National Green Tribunal in 2019 said that adult mortality among the bustards “is still very high due to collisions with power-lines that criss-cross their flypaths.” The report calculated that 15 percent of the bustards may be dying due to the high density of transmission lines in Rajasthan and Gujarat.

The diverters look like a string of fireflies on the power lines and work as reflectors for the bustards. Birds can see them from about 164 feet away and can change their flight path to avoid colliding with the power lines.

“In 2018, the government of Rajasthan implemented a pilot project of installing bird diverters on a 700-meter stretch,” said Anil Kumar, team leader of the Great Indian Bustard Project that implemented the latest project in conjunction with the Ministry of Environment and India’s Wildlife Conservation Society.

“Our project is the first to cover such a large area with bird diverters,” said Kumar. “The firefly bird diverters used are 6 inches long and 4 inches wide and painted with radium colors on both sides. These colors help birds to spot the wires during the night as well.”

The Wildlife Conservation Society has installed 1,813 bird diverters on two stretches of 6.5 kilometers (4 miles) between Chacha and Dholiya villages in Pokhran, Rajasthan. The area is opposite the Pokhran Field Firing Range, which offers safe habitat to the breeding population of these birds outside of the Desert National Park Sanctuary in Jaisalmer. The power lines in this stretch cut across the firing range and agriculture fields where the birds are often spotted.

Since 2017, six great Indian bustards have died after colliding with power lines.

“This is a huge number given the fact that these birds are near extinction,” said Kapil Chandrawal, deputy conservator of forests (wildlife) in Jaisalmer.

“Power line collision is the main cause of mortality in these birds. To avoid this, there has been a push to shift the power lines underground, but power companies argue that such a task will involve huge costs, manpower and technology. Therefore, the other option is to make these power lines visible to the birds.”

A number of bird diverters were installed by windmill companies in Jaisalmer in 2018.

The great Indian bustard (Choriotis nigriceps) is one of the heaviest flying birds in the world. The bustard is listed under Schedule-I of India’s Wildlife Protection Act and as critically endangered on the International Union for Conservation of Nature’s red list.  The bird has also been identified as one of the species for the recovery program under the Ministry of Environment and forests.

“Because of this, and a habit of scanning the ground while flying, they cannot detect power-lines ahead of them, from far,” states a paper titled ‘Power-line Mitigation to Conserve Bustards’ by the Wildlife Institute of India. “Being heavy fliers, they fail to maneuver across power lines within close distances. A combination of these traits makes them vulnerable to collision with the power lines leading to injuries, trauma or electrocution.”

The bird diverters installed were endorsed by experts from the International Union for Conservation of Nature’s Species Survival Commission Bustard Specialist Group.

“These type of flapper diverters were found to have the highest reduction in mortality when tested in different environmental conditions compared to the spiral diverters during a study done in Spain,” said Kumar.

“We will be closely monitoring the bird diverters and studying their impact on the great Indian bustard population over the coming months,” said Venu Parameshwar, interim country program manager at Wildlife Conservation Society-India. He said that the bird diverters used in this project have been tested with similar low-flying species in western Europe.

The project was carried out with additional support from the Rural India Support Trust and the Rajasthan Forest Department.