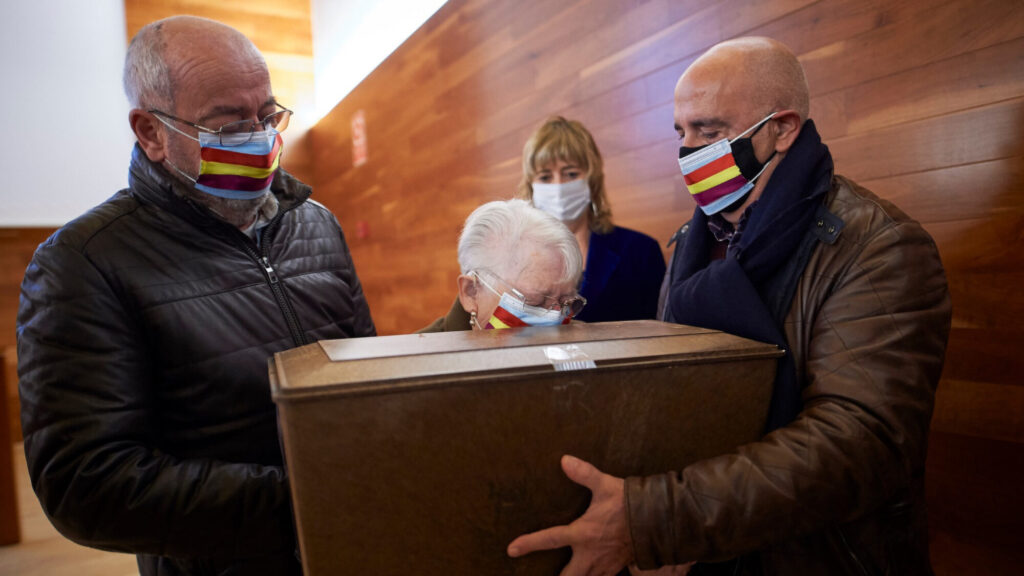 Concha Dieguez receives the remains of her father, Claudio Doreteo Dieguez Loza, who died in the Spanish Civil War. (@RelacionesCiudadanasNA/Newsflash)

NAVARRE, Spain — A weeping woman got to embrace her father’s remains following an 84-year search after he was executed during the Spanish Civil War.

The government of Navarre, an autonomous community in Spain, returned the remains of Claudio Doreteo Dieguez Loza to his daughter Concha Dieguez on Dec. 18.

Footage released after the return ceremony shows investigators uncovering the remains and placing them in a metal enclosure. Dieguez and 15 other relatives are then given the remains, and she can be seen hugging the coffin containing them as her family members console her.

Following the outbreak of the Spanish Civil War, which began as a military coup against the country’s government, Dieguez Loza, a railway stoker, was arrested in the city of Miranda de Ebro, according to the local government.

While it is unclear why he was detained, he was then executed in the town of Alsasua on Sep. 13, 1936. His family was later informed that he had been assassinated by pro-Francisco Franco Bahamonde forces, due to “his political ideas and his work in unions.”

Francisco Franco Bahamonde, a Spanish general, successfully overthrew the Second Spanish Republic during the war and ruled as a dictator from 1936-1975. Dieguez Loza, meanwhile, was a member of the National Confederation of Workers, a group of anarcho-syndicalist labor unions that still exists today.

Dieguez Loza’s remains were discovered in the Otsoportillo Cave, located in the Urbasa mountain range, and were exhumed in 2016 and 2017. Authorities confirmed his identity after DNA testing proved a match to his daughter, who had donated her own DNA sample to the government. His family reburied him on Dec. 20.