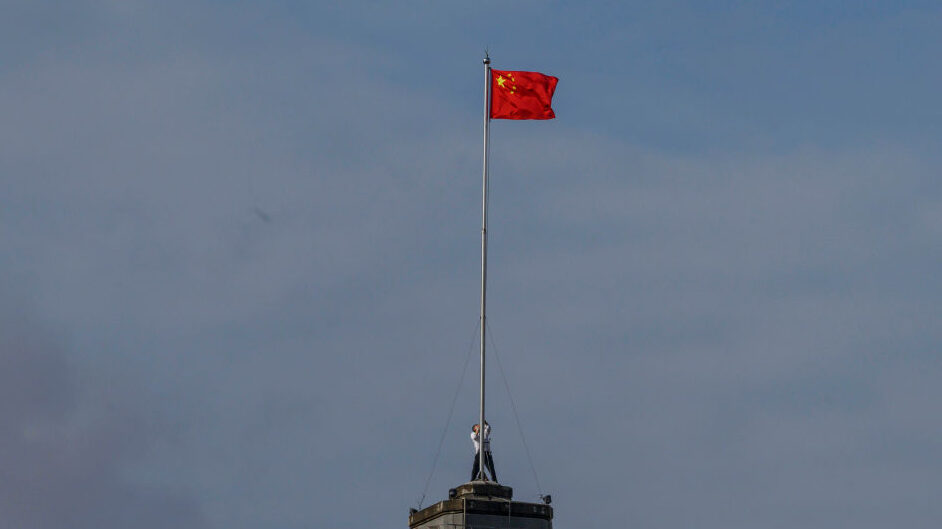 China has emerged as the top security challenge to NATO. A Chinese worker raises a new national flag on the top of a building next to the Bund along the Huangpu River in the financial district in Shanghai, China. (Photo by Kevin Frayer/Getty Images)

JAKARTA, Indonesia — China has emerged as the top security challenge to NATO, triggering questions about how the organization will deal with Beijing.

China’s military rise, due to economic growth that helps boosts its military capabilities, poses a challenge to NATO. That suggests members may hold more meetings and could work to strengthen the NATO 2030-“United for a New Era” statement issued Dec. 1.

But NATO Secretary-General Jens Stoltenberg warned in June that China’s rise has caused a fundamental shift in global power. He stressed China’s investment in infrastructure in Europe, Beijing’s Belt and Road Initiative (BRI), is an ambitious infrastructure project, stretching from Asia to Europe.

NATO members are not all  on the same page

“It is interesting that NATO named China as a threat to the alliance. It is a threat in the sense that China can build its 5G networks, marking the revolution of telecommunication. It will be a threat as NATO member countries and Britain are going to depend on the technology, compromising the intelligence sharing between all the NATO partners, especially with the U.S.,” Weichert stated.

He said the inclusion of China as a threat indicates that NATO members are not on the same page, given that each member has different priorities and interests.

Weichert, who used to work as a congressional staffer, said Washington is too fixated on China.

The U.S is trying to influence Europe not to rely on China’s 5G technology. But the UK, one of the U.S.’ closest allies, may revisit the ban on Huawei after Trump’s election loss, meaning that even U.S allies may take opposite sides.

“The Southern countries, such as Greece, Italy, are tackling the flow of immigrants. The economy of those countries has been the hardest hit by the pandemic,” Bainus told Zenger.

All of China’s tech goes to its military

Joseph F. Johnston, Jr, a lawyer and history expert and member of the American Law Institute, said China poses more threats than Russia, due to Beijing’s continuous effort to modernize the military and develop its technology.

“China is increasingly and dramatically rising its strength in industrial and technological areas, such as artificial intelligence (AI), cloud computing, next-gen technology, robotics, energy efficiency. All the technology goes to the military,” Johnston, who wrote the book “The Limits of Government,” told Zenger.

China may pose a threat when it cooperates with Russia, in terms of military efforts. Despite uniting to counter the U.S influence, both Moscow and Beijing are competing to dominate the world, raising questions and doubts over whether they will align.

As of 2019, eight NATO countries are spending 2% or more of their GDP on defense, including the U.S. Here is the defense expenditures for 2013-2019. The U.S and the U.K will be expected to meet their 2% target going forward, along with Greece, Latvia, Estonia, Poland, Lithuania, Romania, and Norway.

“Most countries are focusing on fixing their economies, making the defense budget less of a priority,” Bainus said, suggesting NATO must stick to its global strategy.

Yet a joint military exercise is needed to contain China, Bainus said. Despite the fact that Russia remains NATO’s biggest threat, China’s vessels in the Indo-Pacific and efforts to modernize its military technology cannot be overlooked.

NATO also has partnerships with its nonmembers including Australia, New Zealand and South Korea.

“How can a military alliance cope with the geo-economics threat China poses?” Weichert asked, adding NATO needs to consider each member’s interests and make them relevant to the 21st century.