The easily deployed module, the first of its kind, quickly responds to any crisis.
By Flemming Emil Hanson December 28, 2020
Facebook
Twitter
Linkedin
Email 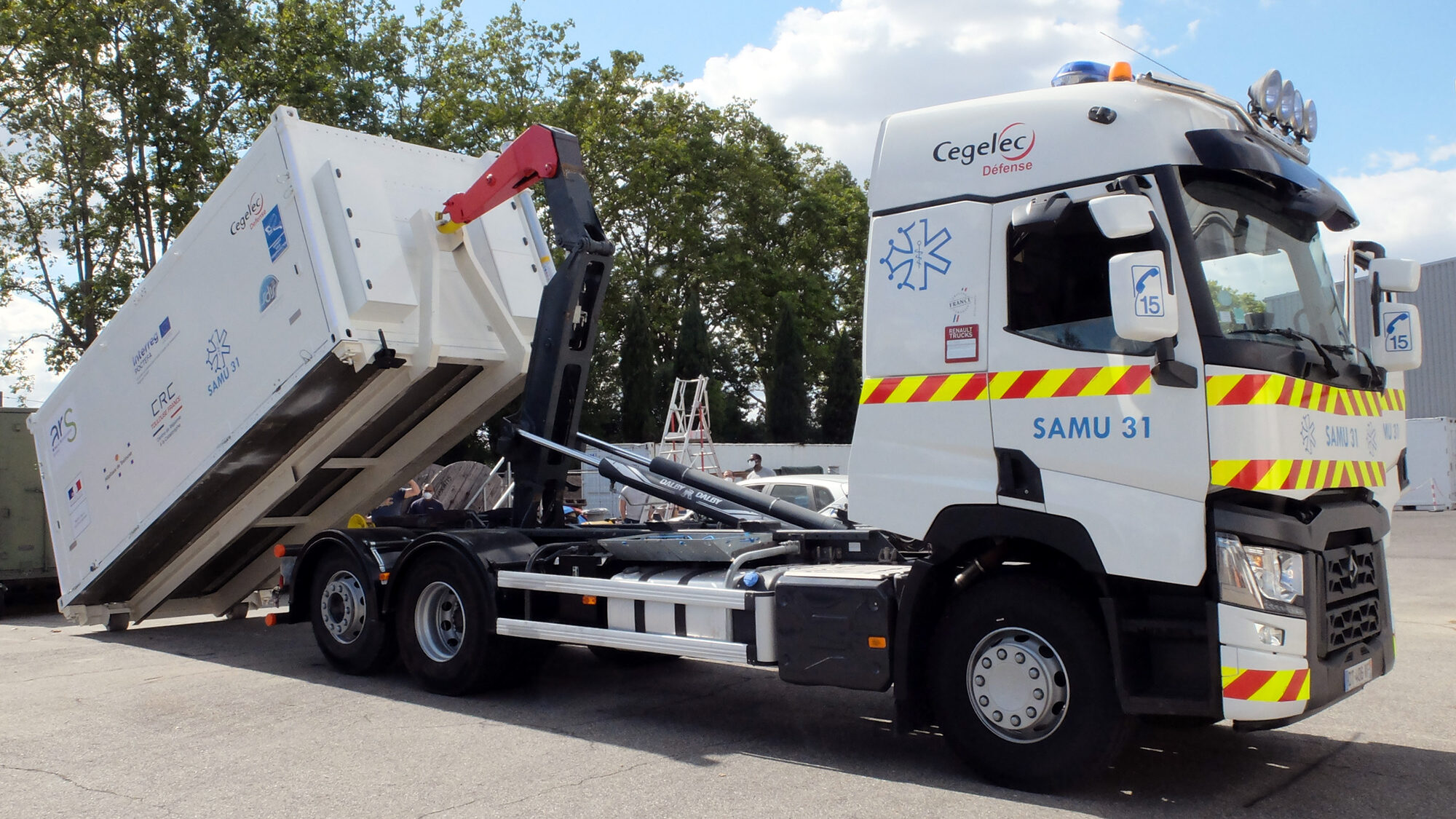 The mobile hospital can be packaged in one 20-foot container. “The container is then deployed, a bit like an accordion, with each cell measuring exactly the same,” said Henry Chevreul, commercial director of Cegelec. (CEGELEC Defense/Real Press)

TOULOUSE, France — A mobile medical hospital that operates like an accordion has just been created by a French defense company. It’s so versatile it can be utilized for anything from health crises to terrorist attacks. Trained personnel can deploy the module in 30 minutes.

The unit is a world-first, said Henri Chevreul, commercial director of Cegelec Defense and a former colonel in the French army. The new Cegelec system, a prototype, is made to order. It hasn’t been put to actual use yet.

The mobile hospital, the Emergency Medical Response and Crisis Management Unit, can be attached to any kind of vehicle, Chevreul said. The goal is to “respond to serious incidents, such as acts of terrorism or accident, that affect a high number of people, in areas that are far from any medical center.”

The latest version delivered to the SAMU is configured and armed with an advanced medical post for the first-aid response to disasters that cause numerous injuries. It will allow for the care of 18 victims or patients.

A new medical module costs about $978,000, with a truck included. It is available to both public and private entities.

In its un-deployed state, the hospital is the same size as a standard shipping container. The product was originally designed for the French Air Force and had to be easy to transport.

The mobile hospital can be packaged in one 20-foot container. “The container is then deployed, a bit like an accordion, with each cell measuring exactly the same,” said Chevreul. “This is not a telescopic system. The ceiling and the floor fold in, like a garage door.”

The mobile unit is deployed on parallel rails, moving up and down as needed.

The original system was designed to be transported by military aircraft, such as the C-130 Hercules and C-160. It also works in an Airbus A400M Atlas. “They can be transported on any type of shipping vessel that can accommodate regular shipping containers,” Chevreul said.

While trained personnel can deploy the module in 30 minutes, Chevreul says two hours would be the optimal amount of time to ensure that everything was assembled properly and to account for any terrain issues.  “If you are on a large parking lot, like a supermarket, it can be completely set up in less than an hour. That includes connecting it to a source of electricity and preparing all the medical equipment inside.”

He said the system can be connected to the main electrical grid, but also works with its own generator. The system comes with an uninterruptible power supply (UPS) apparatus, which provides emergency power when the primary source fails.

It has its own local area network (LAN), so computer systems can be connected. It also has refrigeration facilities for various medical products, as well as charging stations for the equipment. It functions like a regular medical facility, with monitors to oversee patient status and running water, which can be heated.

This system “has no equivalent,” according to Chevreul — in size, mechanical or deployment terms.

Competitors in other countries have been trying to mimic the system without success, the company says.

Some 25 units of the original module have been built with the army in mind. An older model has been sold to the French police and the Spanish army. It is often deployed for big events, “such as G7 summits.

(The company also build an Emergency Operations Center for local crisis management and rescue management. That model was used for the Germanwings crash in the Alps in 2015, which is more about command and control.)

“These systems are perfectly autonomous and allow for emergency responders to have a command center that is simple and easy to deploy. It is also easy to redeploy,” Chevreul said.

Cegelec Defense is a 53-year-old private company that specializes in defense. It originally worked in the French nuclear program, building infrastructure and working on security matters. The business is a subsidiary of the major French construction company VINCI, which is headquartered in Toulouse.

«Previous Post
2020: A year of multi-million deals for Indian IT firms »Next Post
Pining for a Way to Save the Planet? Try a 3D Printed Christmas Tree That Soaks Up CO2