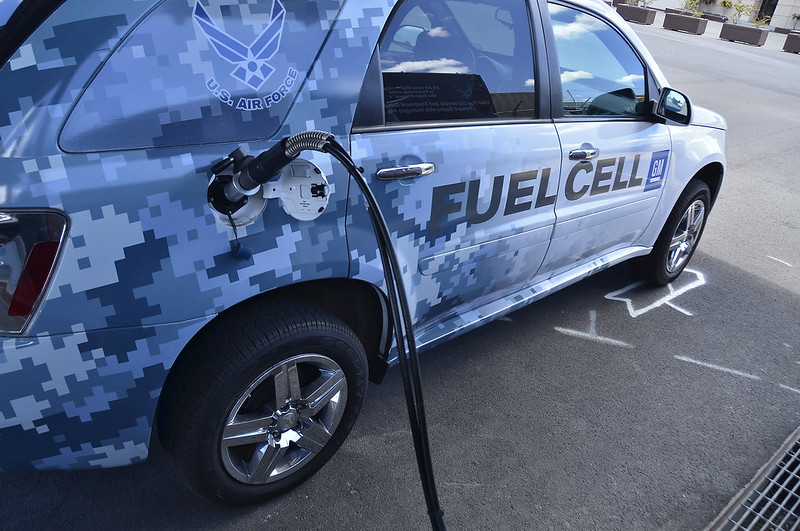 A fuel cell car refuels at the Renewable Hydrogen Fueling and Production Station on Joint Base Pearl Harbor-Hickam. It is the only hydrogen station in Hawaii and about 30 hydrogen-powered vehicles use the JBPHH station. (U.S. Navy Photograph by Mass Communication Specialist 2nd Class Daniel Barker/Released)

It’s the simplest and most abundant element in the universe, and it could be the key to bridging energy gaps to allow the world’s economies to meet ambitious climate change goals. Though using hydrogen for energy isn’t a new technology, it’s getting a fresh look from the energy industry, and the development of hydrogen is becoming a priority as nations around the globe seek low-carbon energy solutions.

At the Reuters Events: Future of Renewables conference this month, energy industry officials frequently cited the need to increase production of hydrogen to meet clean energy targets around the world.

“In the past, there have been false starts in hydrogen production,” said Eamon Nolan, partner at the international law firm Vinson & Elkins, during a session titled “Unlocking the hydrogen economy.” “Now the talk about a hydrogen tsunami feels very real.”

Clean energy targets to address climate change are the main driver in the emerging rush to hydrogen, energy officials at the conference said. Scientists are forecasting a steady increase of temperatures around the globe as a result of the burning of fossil fuels that release carbon dioxide, which is a “greenhouse gas” that traps heat in the atmosphere. Countries are turning to energy sources that don’t emit carbon dioxide — like wind and solar — as part of an effort to halt this trend and “decarbonize.”

Recently, several countries have announced clean energy targets. In November, the United Kingdom announced a 10-point plan and at least 12 billion pounds of funding to drive a “green industrial revolution,” with boosting hydrogen production as a key element. Likewise, the European Union is seeking to reduce emissions 55% by 2030 as part of a “Green Deal” to make the continent “climate neutral” by 2050.

To meet these goals, the energy industry is now serious about ramping up large-scale hydrogen production, said Daryl Wilson, executive director of the Hydrogen Council. He said the organization has grown from 17 members in 2017 to 100 members today.

“Some ask if this is another hype cycle, like we saw in the 80s and 90s,” Wilson said. “I assure you it’s not. We’re into the real deployment of hydrogen on a large scale.”

Hydrogen isn’t an energy source; it’s an energy carrier, which means that energy must be used to create it. And though the first element on the periodic table is everywhere in the universe, it doesn’t occur naturally on Earth. However, by use of electricity or another energy source, it can be derived by splitting the water molecule, which will produce pure hydrogen and oxygen. As a result, a hydrogen fuel cell’s only emission is water.

However, while hydrogen fuel may be a clean energy after production, it doesn’t help advance climate change goals if it isn’t produced with a clean energy source. To help distinguish between production methods, hydrogen fuel is color-coded. They range from “brown hydrogen,” which is made from coal and is not considered a clean energy source, to “green hydrogen,” which is produced through electricity generated by solar or wind power. There’s also “gray hydrogen,” which uses natural gas and produce less/fewer carbon emissions than brown hydrogen does. “Blue hydrogen” is created through fossil fuel energy that has had its carbon emissions captured and safely stored.

While hydrogen has a versatility of potential uses, it will be most useful in meeting needs that aren’t easily accomplished by electrification, several energy officials said.

“Hydrogen should be used for things where there aren’t good alternatives. Things like heavy transportation, fertilizer, shipping, aviation and seasonal storage,” said Darren Miller, the CEO of the Australian Renewable Energy Agency, known as ARENA. “Where electricity can’t do its job, this is where hydrogen has a unique role to play.”

One advantage hydrogen has is that it is not a new industry. There is already an estimated $218 billion in production of industrial hydrogen, with existing infrastructure like pipelines and storage units, Wilson said.

While the process of creating hydrogen is established, the infrastructure needed to support a viable industry can be expensive. For example, hydrogen needs to be stored at high pressures and low temperatures. Transporting hydrogen through pipelines or tanker trucks can also be challenging or expensive, officials said.

While most of the technology to make hydrogen fuel is well established, the challenge will be to make it economical. In Australia, the goal was to drive the cost down to $2 per gallon, putting it on par with gasoline and other fossil fuels, Miller said. For hydrogen to develop its full potential, it must have wider distribution.

Making hydrogen more economically competitive requires driving down the cost of the electrolyzer, which uses electricity to separate hydrogen from water. For that to happen, the equipment makers need more orders, which governments can promote through subsidies and regulatory requirements, said Michele Azalbert, Hydrogen Business Unit CEO of French-based renewable energy provider Engie.

Across a series of panel discussions, energy and government officials said that while government subsidies and policies were critical to spark development of hydrogen fuel production, it would be the private sector that ultimately makes the technology viable.

“There is a huge interest in the hydrogen economy,” said Kwasi Kwarteng, United Kingdom minister of state for business, energy and clean growth. “If successfully deployed, hydrogen is a strong lever for decarbonization. The challenge is how to encourage the private sector to invest in technology. The crux of the problem is how to produce it cheaply and economically.”

«Previous Post
Have a Merry and Eco-Friendly Christmas: Recycle Your Tree»Next Post
2020: A year of multi-million deals for Indian IT firms