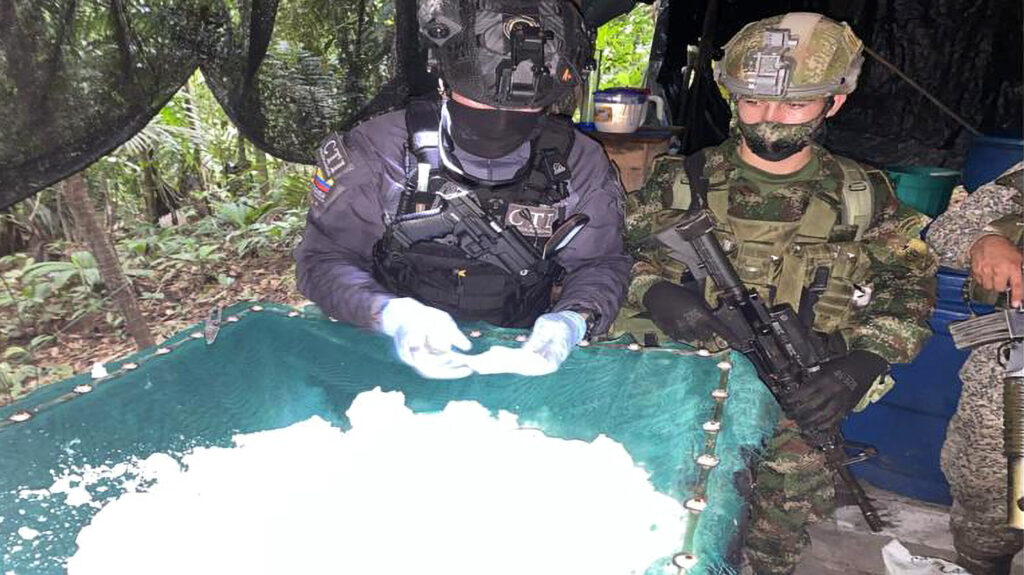 The laboratory had the capacity to produce four tons of cocaine a month, according to the Navy. (Armada Colombia/Newsflash)

TUMACO, Colombia — Law enforcement authorities in Colombia have dismantled a “gigantic complex” used by an organized crime group to produce tons of cocaine.

The operation, conducted in coordination with the National Army and the Attorney General’s Office, took place in a rural area near the Curay River in Tumaco, a southwestern city close to the country’s border with Ecuador, the Colombian Navy announced on Dec. 20.

Troops destroyed the eight-structure drug laboratory believed to be operated by the “Western Block Alfonso Cano,” a Residual Organized Armed Group, in a “controlled manner at the scene, under strict security regulations and keeping all the measures for the preservation of the environment.”

The laboratory had the capacity to produce four tons of cocaine a month, according to the Navy. While there, officers found nearly 4,500 pounds of cocaine hydrochloride that was “ready to be packed and sent to Central America,” as well as almost 2,000 pounds of coca base paste, more than 4,500 gallons of liquid supplies, 10 microwaves and several other items used to produce the drugs.

“With the dismantling of this complex for the production of cocaine, it is estimated that more than 13 billion pesos ($3.7 million) will affect the finances of this Residual Organized Armed Group, money that includes the cost of the illegal complex and the commercialization of the drug in countries of Central America and the United States,” said Rear Admiral José David Espitia Jiménez, commander of the Joint Task Force against Drug Trafficking No. 72 “Poseidón.”

The Colombian military’s sustained anti-drug trafficking efforts against organized crime groups in the country have led to the recent arrests of several suspects accused of trafficking, producing or possessing narcotics, including six in October and another three in late August, as previously reported by Zenger News.