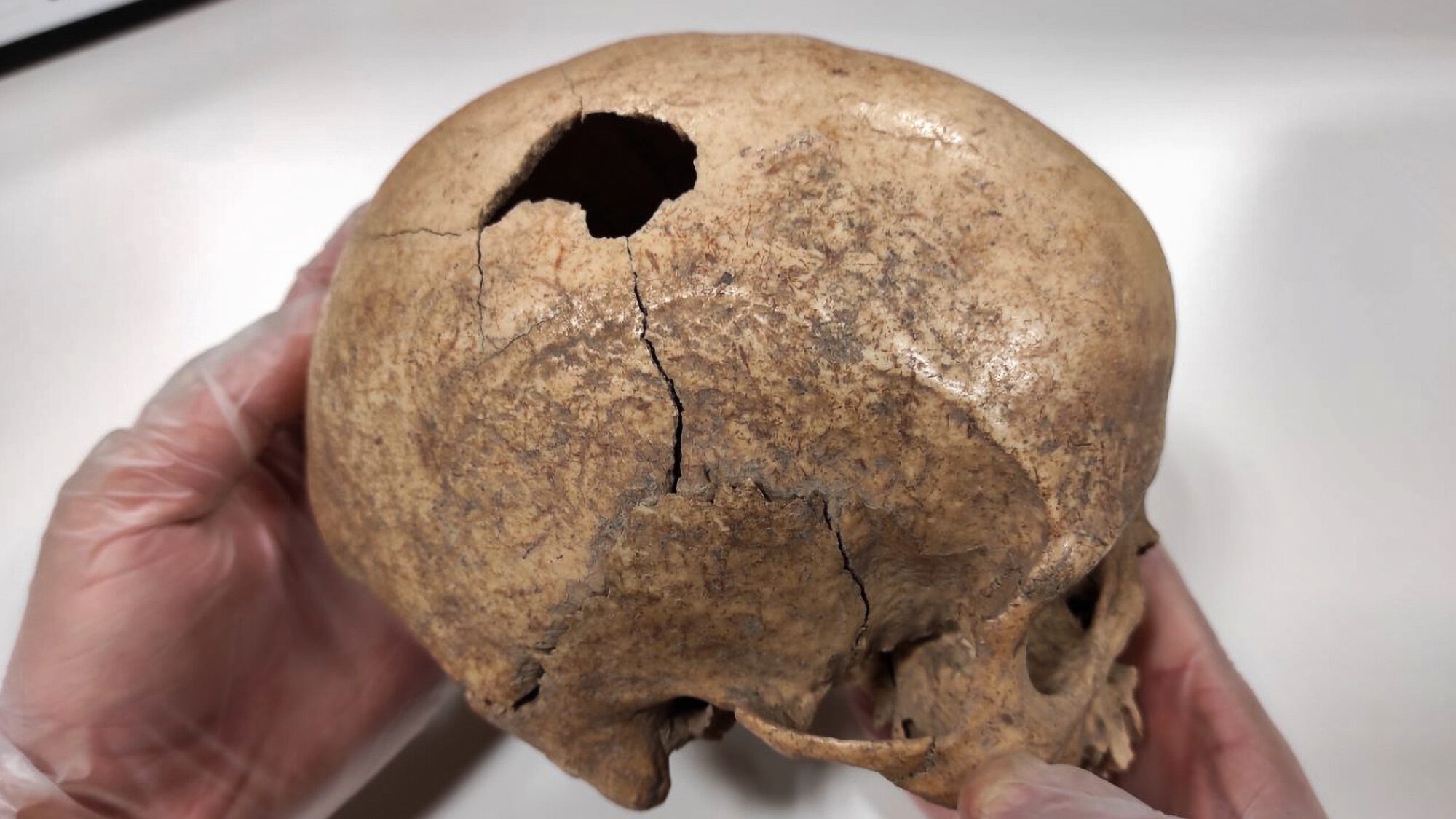 The skull with the injury in the head. (Photo by IPHES/Real Press)

CALAFELL, Spain — Researchers have determined the cause of death of a man killed more than 5,000 years ago by applying modern forensics techniques to his fractured skull.

The skull was first discovered in 1999 during an excavation of Cova Foradada, a prehistoric cave and archeological site in Calafell, Spain, in the northeastern region of Catalonia. However, scientists just recently figured out how the victim died, and the results of their research were published in the International Journal of Paleopathology this month.

The skull was uncovered in a collective burial site created during the Neolithic Period, Miguel Angel Moreno-Ibanez told Zenger News. During the man’s life, small agricultural communities increasingly fought over resources, leading to a dramatic increase in murders, according to injuries evidenced in other nearby remains.

“There is an exponential increase in violent deaths at that time,” Moreno-Ibanez said. “They start to produce food. They are not hunting and gathering anymore, and therefore, there are permanent communities living in the same place,” which fought to control “crop areas or even to steal supplies from other communities.”

After using observation techniques, X-ray imaging and tomography to analyze the head injury, located in the right parietal area of the skull, experts ruled that a strong blow to the head with a heavy object was the cause of death.

“The skull fracture has allowed us to find out the kind of item used to cause the death of this individual, as well as the direction of the blow,” Moreno-Ibanez said. “The angle of the fracture tells us that it was a perimortem trauma, so at the moment of death.”

The researcher explained the weapon used is believed to have been “a small-sized hoe.”

“The injury was done from behind and probably by a right-handed attacker,” Moreno-Ibanez said, adding the victim likely did not see it coming.

Forensics evidence further revealed the tool was removed from the victim’s head after the attack. The skull also bears two antemortem fractures that were likely inflicted years before the man’s death, including one in the occipital and one in the right area, both of which had healed. A post-mortem fracture was also found in the skull’s lower occipital area.

The motive behind the murder remains a mystery, but scientists believe there are several possibilities, including an intergroup confrontation or a confrontation against another group.

The collective burial site in which the skull was found included the remains of 18 other people.

“The bodies are left inside the cave, not buried, and some people believe the entrance of the cave was closed with a stone or wood so animals were not able to go inside, although they finally managed to go in, as is seen clearly in the remains,” Moreno-Ibanez said.