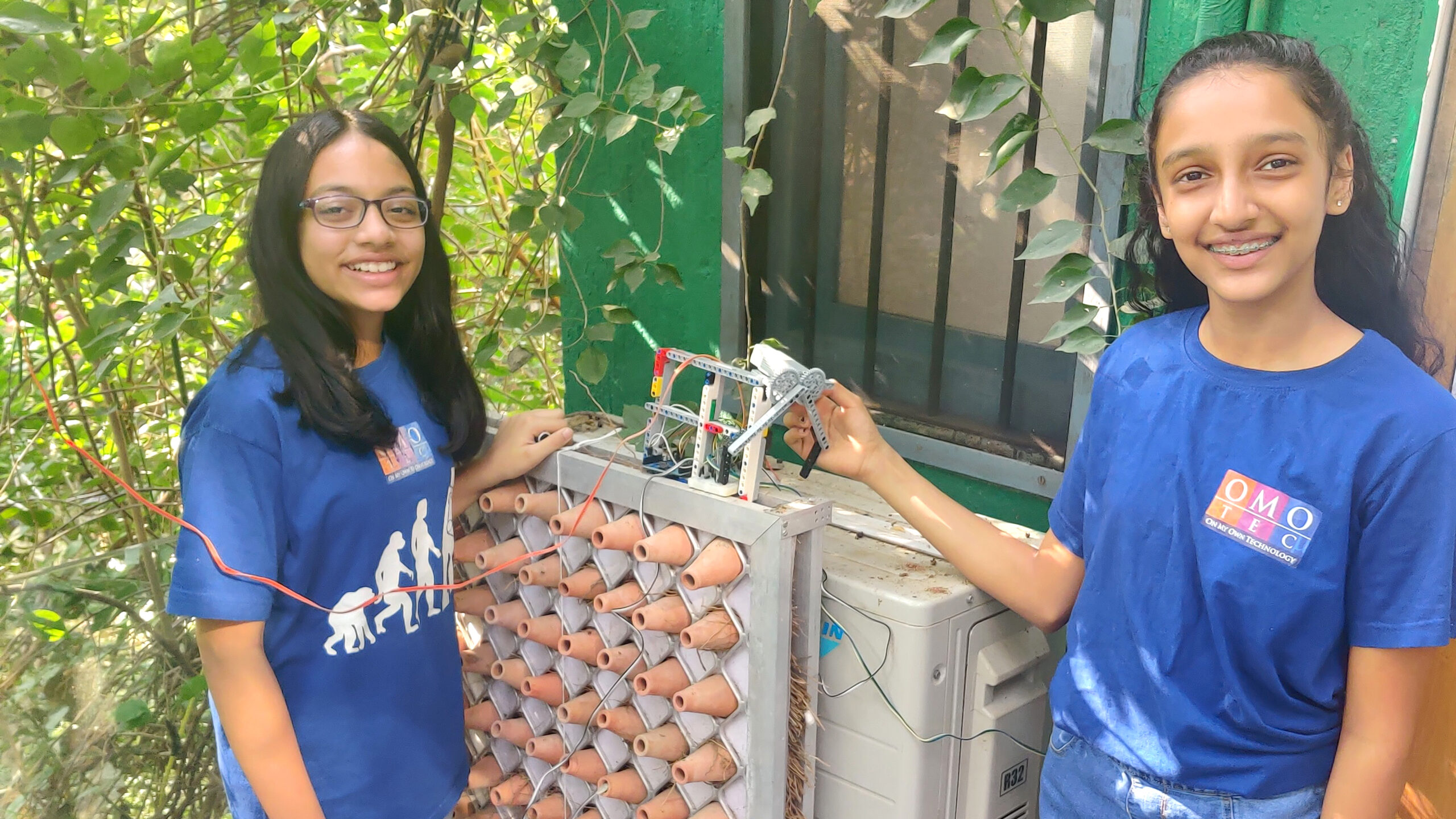 Antara (left) and Prisha (right)stand next to their robotics solution model that bagged them the gold medal at WRO Canada 2020. (Photo Courtesy: Reetu Jain)

Antara and Prisha’s team — Technonerds — won the medal for designing a robotics solution that cools the air expelled from the outdoor units of air conditioners by seven to nine degrees centigrade. They were declared the winners among 20 finalists chosen from 450 teams representing over 75 countries.

While Antara was celebrating Diwali with her relatives when the winners were announced, the girls’ mentor Reetu Jain was busy praying to the Hindu goddess Lakshmi for good results.

“It makes me proud to see my students bring laurels for the country,” said Jain.

Jain is the founder of a Mumbai-based STEM learning institute “On My Own Technology” or OMOTEC. A STEM curriculum educates students in four specific disciplines — science, technology, engineering, and mathematics — in an interdisciplinary and applied approach. In WRO 2019, OMOTEC won the first prize in the Open Senior category (16-25 years).

The World Robotics Olympiad Association has been hosting the global robotics competition since 2004. Over 75,000 students in the age group 6-25 years from 75 member countries took part in 2019. Over 25,000 teams participated this year. Teams can participate in four different age-group categories. Each team can have a coach who guides them throughout the project and travels with them to the host country.

National Council of Science Museum (NCSM) and India STEM Foundation jointly organize the World Robot Olympiad (WRO) India. Seven selected teams from every country get a chance to represent the country in the international WRO.

This year’s event was hosted virtually at Montreal, Canada from Nov 13 to 15. “Climate Squad” was the theme for the year and participating teams were required to design robotic solutions for a climate-related problem.

“The idea first struck us when we were rushing past the multiple AC outdoor units in the building where our institute is located,” said Prisha. “We wondered how much heat these ACs released into the atmosphere. In Mumbai’s ACs are on for most part of the year because of the warm climate.”

“The water that is let out from the AC is recycled and passed through the cones. As the hot air passes through a layer of hay and then through the moist clay cones, it cools down significantly,” explained Jain.

“We applied the concepts of Venturi effect and Boyle’s law to our model. We fitted four sensors on the outdoor unit,” said Prisha. “These sensors measured temperature and humidity both inside and outside the created filter. We kept monitoring the performance of the filter through a robotic circuit that was developed using Arduino.” Arduino is an open-source electronics platform based on easy-to-use hardware and software. Arduino boards are able to read inputs — light on a sensor, a finger on a button, or a Twitter message — and turn them into output that activates a motor, turns on an LED, or publishes something online.

Using the MIT App Inventor, a visual programming environment that lets users build mobile apps, Technonerds developed an application that provides a user with information on the testing parameters — the temperature inside the room, right outside the AC unit, and 5 meters from the AC. The app also computes the three recorded temperatures to suggest a suitable AC temperature that would reduce energy and heat emission, also ensuring optimum cooling at the same time.

“The solution is elegant, innovative, economical, and sustainable,” said Jain. “The girls worked on the project for six months. They were spending around 15 hours at our institute during the final stage of the model’s development. They even asked me to arrange beds so that they could work for longer hours and spend the nights here!”

Both Antara and Prisha study at the Jamnabai Narsee School in Mumbai. While Antara is in the 6th grade, Prisha is in 7th.

“STEM learning was a relatively new concept in the education sector when we began in 2004,” said Sudhanshu Sharma, founder of India Stem Foundation (ISF), the affiliate partner of World Robot Olympiad Association in India.

“Rote learning was prevalent in most schools and hardly any efforts were taken to teach students through hands-on activities. The idea of moving away from the blackboard was not very welcome during that time. But the sector saw growth as more parents got interested in providing their kids with practical education.”

“The first World Robotics Olympiad India, held in 2006, had only 19 participants. Now, over 700 teams come down to Delhi for the contest every year.”

Apart from its regular courses for young students, the Robo Shiksha Kendra program has been a huge success for ISF. Started with an aim to bridge the infrastructural gap between students in urban and semi-urban or rural areas, the program now has over 100 robotics labs set up in remote towns and villages. Scratch, Lego Mindstorms, Python, and machine learning are the various learning modules that the students at Robo Shiksha Kendras get trained in.

STEM learning has gained huge traction in recent years and has been furthered by the Modi government’s initiatives. The NITI Aayog on August 10 launched the Atal Tinkering Labs (ATL) AI Step up module, enabling students to work on advanced artificial intelligence projects. ATL, started in 2016, was established by the Atal Innovation Mission to “promote a culture of innovation and entrepreneurship in the country”.

Through the National Education Policy 2020, approved by the central government in July, the education ministry has introduced computational thinking and coding activities for students from the 6th grade. Artificial intelligence, design thinking, holistic health, organic living, environmental education, are a few other subjects that middle school students can opt for.

“Though school education has seen a phenomenal change over the years, higher education hasn’t,” said Sharma. “Both the infrastructure and curriculum of colleges need to be upgraded so that school pass-outs get a better platform to use existing skills and learn new ones.”

Asked about their dream professions, both Antara and Prisha said they would like to explore the field of robotics further and create solutions for real-world problems.

“Robotics is so much fun and addictive. Once you start learning it, you can’t help but love it more,” said Antara.

Both Prisha and Antara have been studying robotics at the On My Own Technology Institute for the past four years and have represented India in several international tournaments. The girls are now working on a facial recognition system that could be implemented in manufacturing plants to check the entry of workers who enter the premises without adequate protective gear.