These bright little shelters created by an animal lover in northeast India are all the rage on social media
By Saptak Datta December 26, 2020
Facebook
Twitter
Linkedin
Email 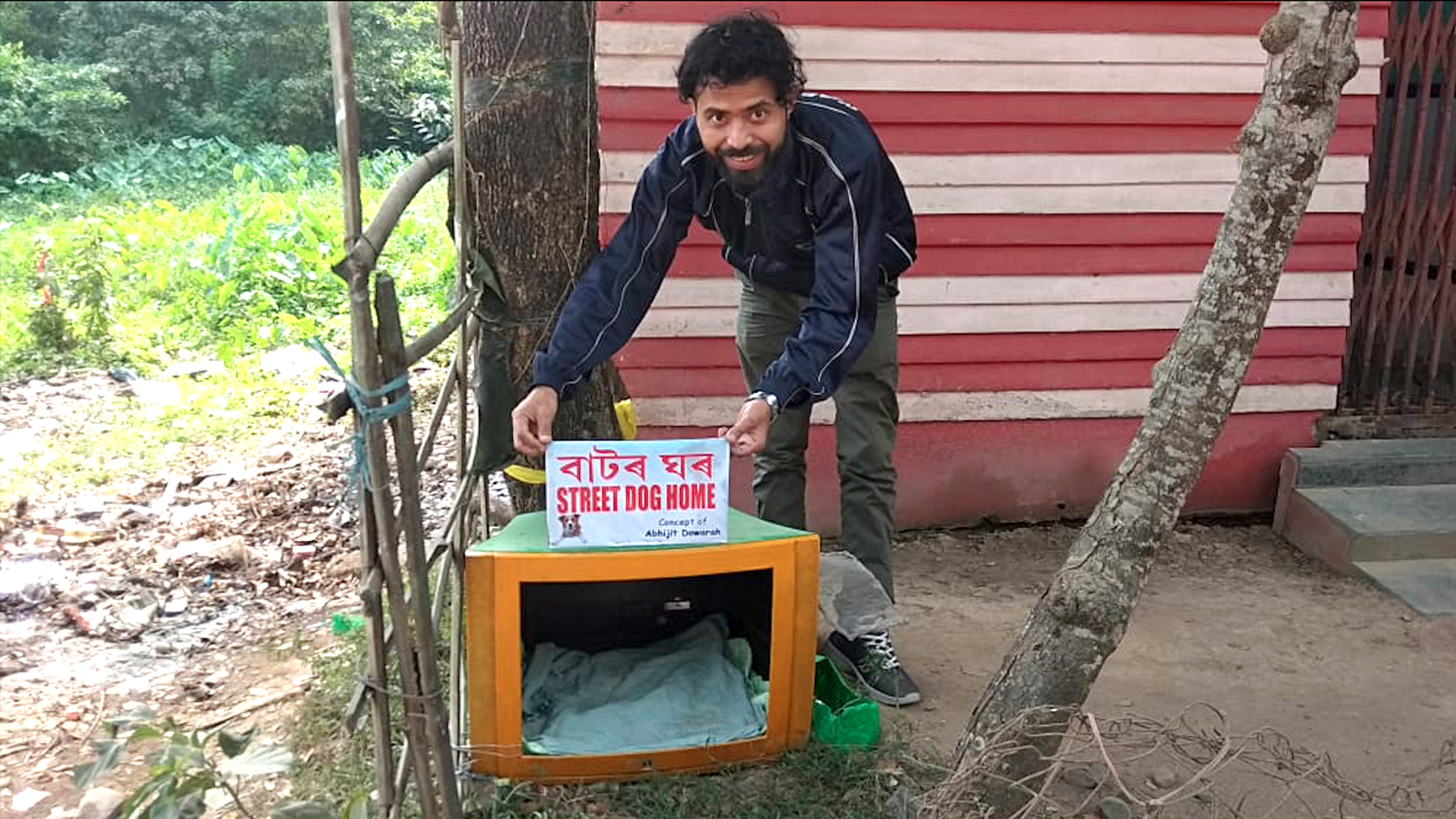 Abhijit Dowarah, an animal-lover in Assam, a state in northeastern India, is doing his bit to ensure that winter is a little less bitter for street dogs. He has been making small kennels for strays with discarded television sets to shelter them from the extreme cold the region experiences during the winter months.

“I had been thinking of this idea of creating kennels for strays for quite some time now, and when winter arrived, it was the perfect time to get it done,” said Dowarah.

The 32-year-old auto mechanic from Sivasagar who comes from a very disadvantaged background, started experimenting with several discarded items before he hit upon using old box television sets to make the “Baator Ghor” (street home for dogs).

“These days people use flat screen TVs so there were plenty of discarded box TV sets lying around that I started modifying. They had ample space for stray dogs to make them their home,” he said to Zenger News.

A jute sack is laid on each kennel’s floor and a cotton cloth is spread out over it to absorb the cold. The shelters are painted green and yellow to make them easily noticeable.

“I, initially, did not like dogs,” said Dowarah. “But I changed after my brother brought me a puppy for my birthday. Raising it made me realize the plight of stray dogs that suffer much neglect and abuse.”

Ever since people came to know about Dowarah’s initiative through social media, several of them, including a veterinarian, have joined his cause.

“It was not financially possible for me to feed around 36 dogs twice a week,” said Dowarah. “But with the help of several contributors, we feed the stray dogs every Wednesday and Sunday. Since we have a vet in the team, we also provide them with certain medicines, and we are also planning to vaccinate the dogs in the future.”

Dr Raghav Barua, the veterinarian who joined Dowarah’s cause, is very impressed with Dowarah’s kind-hearted gesture.

“People usually feed dogs and give shelter to a few of them,” said Barua to Zenger News. “But what Abhijit has done is quite unique. Northeast India tends to get very cold in winter and the poor dogs suffer, but he has come up with a perfect solution.”

Barua claimed he approached Dowarah after coming across a social media post, and promised medication and vaccination for the dogs.

“The street dogs tend to suffer from skin diseases like mange as they are always in an unhealthy condition,” he said. “A dog does not groom itself like a cat, hence, they usually suffer from fur loss or ticks. When the dogs are fed by Abhijit (Dowarah), I inspect the dogs, and provide them with proper ointment and medicines.”

Dowarah said that he has already created eight kennels, which are home to 30 puppies, and 12 more shelters are in the pipeline.

According to the 2012 Livestock census for stray cattle and dogs, India is home to 17 million stray dogs. Most of them live a tough life, scavenging foods from garbage and spread certain diseases.

Dowarah is known as an “innovator” in his region.

“Apart from the makeshift kennels, in the last five years, I have created around 48 utility items from scrap materials,” he said. “Therefore, people don’t throw away old items anymore but give them to me to turn them into something useful.”

During the pandemic, he created portable sanitization machines with old cans. Prior to that, he had made a CSB (Cellular Switching Board) device with discarded circuits, it helped the people to switch on/off fans and lights through one click.