Corn dough, vegetables, spices, and meats, are wrapped in banana leaves for Christmas in Colombia. Santa loves it. 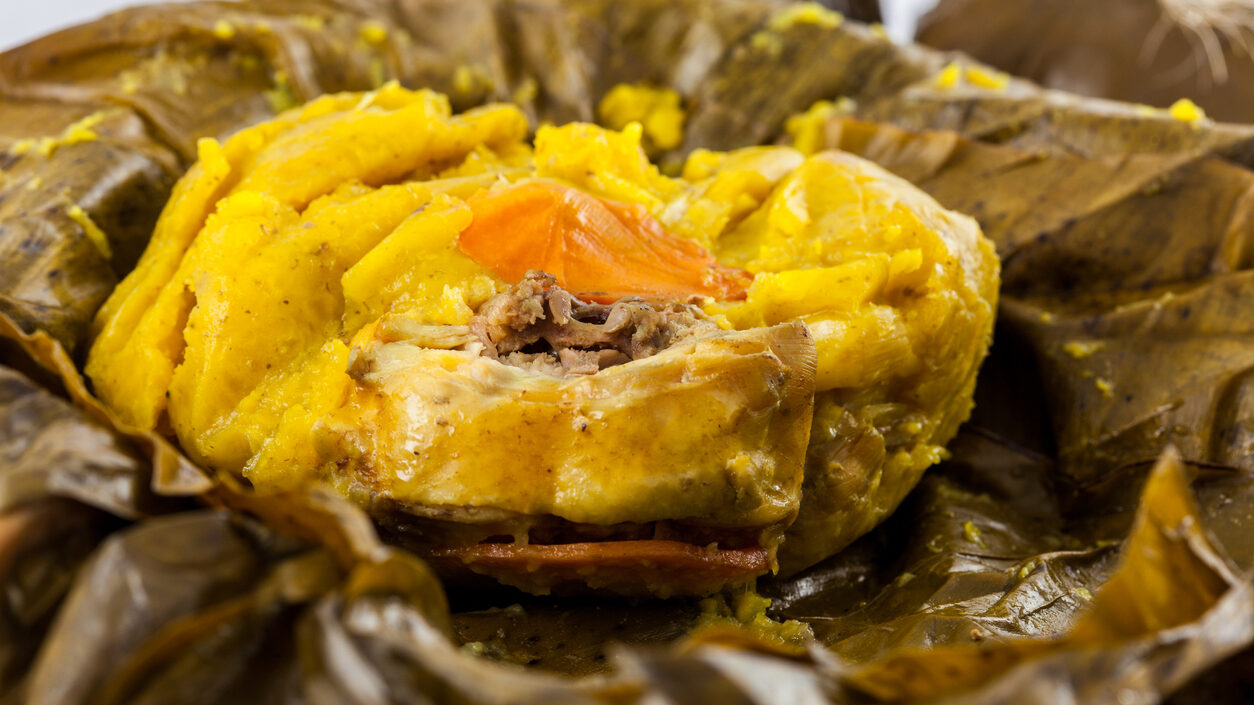 Traditional Colombian tamale as made on Tolima region isolated on white background. (Photo by anamejia18, iStock)

One would think that tamales are the exclusive property of Mexico but they are not. Many Latin American countries have their tamales, including Colombia. Tamales are so prevalent in Colombia that its people proudly call their land “the King of the Wrapped Ones.”

Colombian tamales might have corn dough, vegetables, chickpeas, spices, and meats, everything wrapped in fresh banana leaves. They are a traditional Christmas dish prepared all over the country.

“Aztecs gave us tamales, but we Colombians made them ours adding pork, carrots, and peas. We call tamaleada when the family gets together to make tamales. Tamaleadas are a tradition of the season. In big families, everyone contributes with an ingredient,” said Carolina Giraldo, originally from Medellín, Colombia.

Colombians have more than seven types of tamales. Different regions have different styles. The most popular are those of Tolima, the Cauca Valley, Santander, Antioquía, and Bogotá.

Cooks in the department of Antioquía prepare the dough either with ground corn or achira, a plant from the Cannaceae family from which Colombians make flour. They stuff their tamales with ribs and pork, but they may also add bacon, potatoes, peas, onions, and garlic.

Tamales from the Córdoba region have eggplant mixed in the dough, while cooked and ground white rice is the base of the dough of Nariñense tamales (from the Nariño area.) In the Cundinamarca department, cooks add pumpkin to their tamales’ dough.

Tolima’s tamales are famous for combining corn with white rice, chicken, pork, eggs, and cumin, while in Cauca, they are stuffed with a hot peanut sauce called pipián.

“There is no perfect tamale,” said Giraldo, acknowledging how hard it is to make them. “Sometimes, they end up harder or softer than what one would expect.”

Despite all its variations, preparing the dough is the hardest and the most critical process in making tamales. “One has to measure the dough’s consistency. If you don’t add the right amount of broth and lard, the dough will not be ideal for the tamale you want. The dough is where everything starts,” Giraldo said.

The Ibagué Municipality’s Chamber of Commerce and Tolima’s Governor’s Office chose June 24 to celebrate and honor this traditional dish that has become an institution at Christmas.

(Translated and edited by Gabriela Olmos. Edited by Alex Patrick.)