Bear-baiting, where chained bears are pitted against dogs, is still practiced in some parts of rural Punjab. 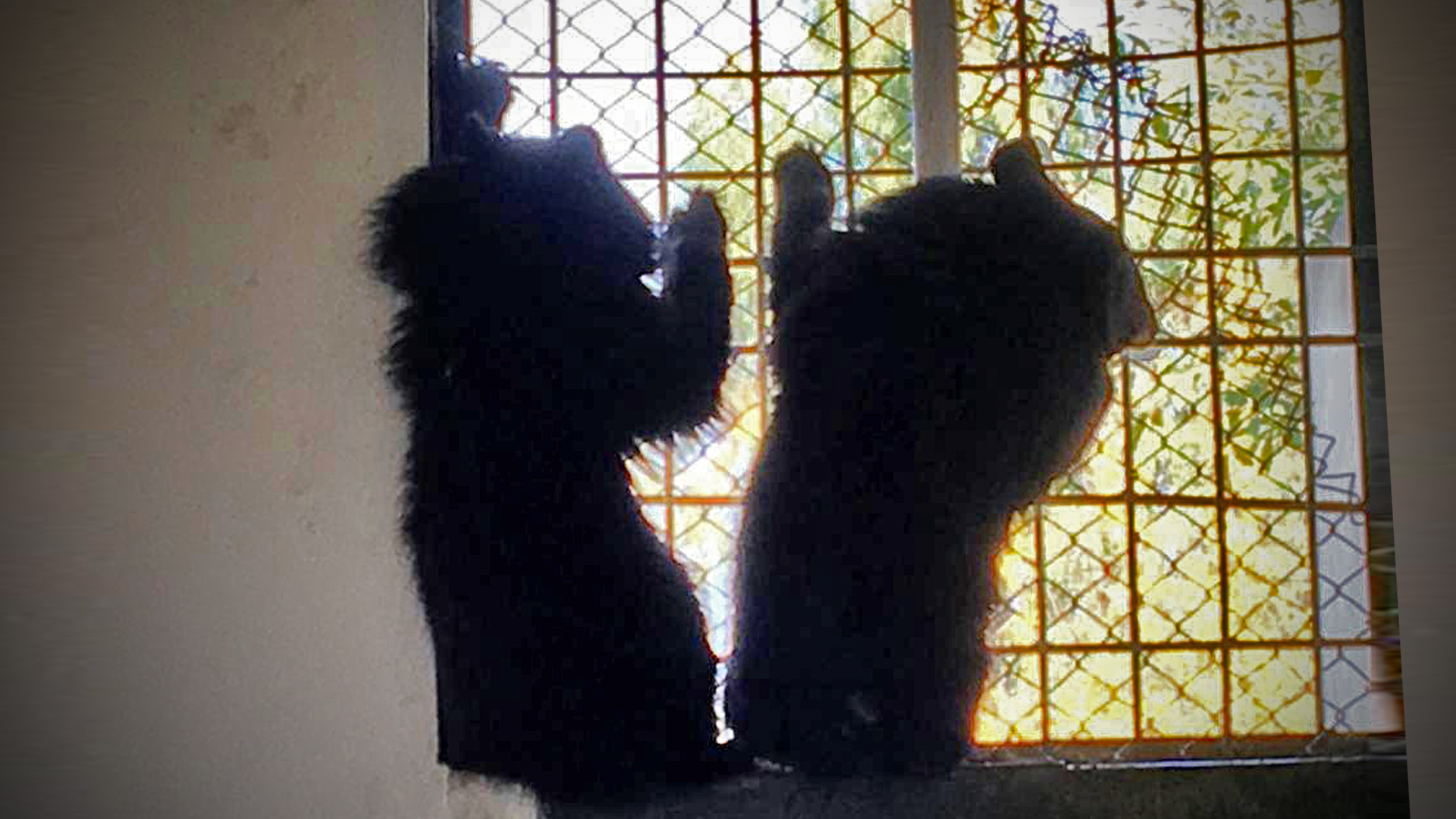 The rescued black bear cubs have been clinging to the window since arrival. (Photo credit: Khyber Pakhtunkhwa Wildlife Department)

Pakistan customs officials recovered two black bear cubs from the Pakistan-Afghanistan border on Dec. 14 that have since been transferred to the Peshawar Zoo.

The bears were rescued when customs officials at the Torkham border intercepted a man who was crossing into Pakistan from Afghanistan. He was carrying a sack among other things on a cart. The officials saw something move inside the sack.

“When the man was ordered to open the sack, they discovered that it contained two black bear cubs who seemed sedated,” said Peshawar Zoo Director Ishtiaq Khan. “The pair are about a year old. It seems they are wild bear cubs, but we are monitoring them and acquiring more information.”

He said that the authorities would decide whether they would be moved to the wild or be kept at the zoo only after having more information about them.

“The two refused to eat anything on arrival, and they gravitated to the windows in their cell,” Khan said. “Since their arrival, they have not moved from the windows. The bear cubs are so scared, it is possible that their mother was killed in front of them before they were captured.”

Dr Mohsin Farooq, Chief Conservator, Wildlife, Khyber Pakhtunkhwa, said the department checked the two cubs at the border, and they seemed healthy. Each one weighed about 30 kg, he added.

“Cubs remain very close to their mother. The hunters often kill the mother first in order to catch the cubs,” he said. “After their mother’s death, the cubs do not know what to do and are too young to fight back making it easy for the hunters to catch them.”

Farooq said that wildlife is often smuggled into Pakistan from Afghanistan but this was the first time that bear cubs were brought in.

“Bear-baiting has been controlled in Pakistan to a large extent,” he said. “However, there are still some areas in Punjab province where this cruel sport is continuing secretly.”

Bear-baiting is a blood sport where dogs are set upon a chained bear. The teeth of the bears are removed with pliers and their claws filed down when they are captured.

He said it was not clear whether these two cubs were being smuggled for bear-baiting or to be turned into dancing bears used by certain nomadic communities to perform tricks. This practice was in vogue in the old part of the cities and rural areas.

Bear-baiting still exists in countries such as Pakistan and in places like South Carolina, USA. While the bloody and cruel sport is banned in Pakistan, several efforts to legislate against it in South Carolina continue to fail.

Though it is still legal in South Carolina to “bay” bears (as bear-baiting is called there), the practice was effectively ended when the South Carolina Department of Natural Resources indicated it would not issue any new permits for the private possession of black bears in 2013.

Six bears that had been used in “baying” competitions in South Carolina were moved to the Wild Animal Sanctuary in Keenesburg, Colorado, in October 2013.

The proceedings at bear-baiting, be it Pakistan or South Carolina, are the same. Spectators hoot, shout and place bets. Trained dogs attack the chained, terrified, maimed and tethered bear.

The practice is illegal in Pakistan under the 1890 Prevention of Cruelty to Animals Act, which makes cruelty to animals punishable but is rarely enforced. In 2001, bear-baiting was specifically prohibited by Pervez Musharraf, the then president of Pakistan.

Despite being prohibited almost two decades ago, a hefty amount is still gambled on this sport in the Punjab province, secretly.

A video recently surfaced on social media of bear-baiting in the city of Rahim Yar Khan, bordering Punjab and Sindh provinces.

In 1997, a sanctuary for bears was established on the banks of the Indus River in the mountainous region of Khyber Pakhtunkhwa. However, the 2010 floods destroyed the sanctuary and it was later moved to Balkasar, a two-hour drive from Islamabad.

The Balkasar Bear Sanctuary is a retirement-and-rehabilitation home and veterinary care for rescued bears from bear-baiting events. It houses the endangered Asian black bear and Himalayan brown bear species.

“There are only two bears left in the province which are owned privately and are used in private events,” he said. “We are looking for these two bears and once they are found, we will shift them to Balkasar sanctuary, and Sindh will be free from the cruel sport of bear-baiting.”

However, he said there are over a hundred bears in private hands in Punjab and this sport is continuing.

The former dancing bears, who endured years of suffering at the hands of an owner who removed nearly all of their teeth, were taken via plane to Jordan, where they will receive medical care and begin a new life at the Al Ma’wa for Nature and Wildlife Sanctuary run by the Princess Alia Foundation and Four Paws.

Himalayan brown bears (Ursus arctos isabellinus), such as the pair evacuated from the zoo, are a subspecies of the brown bear (Ursus arctos) that primarily lives in northern Afghanistan, northern Pakistan, northern India, west China and Nepal. They are the largest mammals in the region and are omnivores that eat a variety of plants, insects and other smaller mammals.

While the brown bear as a species is listed as of “Least Concern” by the International Union for Conservation of Nature, the Himalayan subspecies population is declining and is classified as “Endangered” on the IUCN’s Red List.