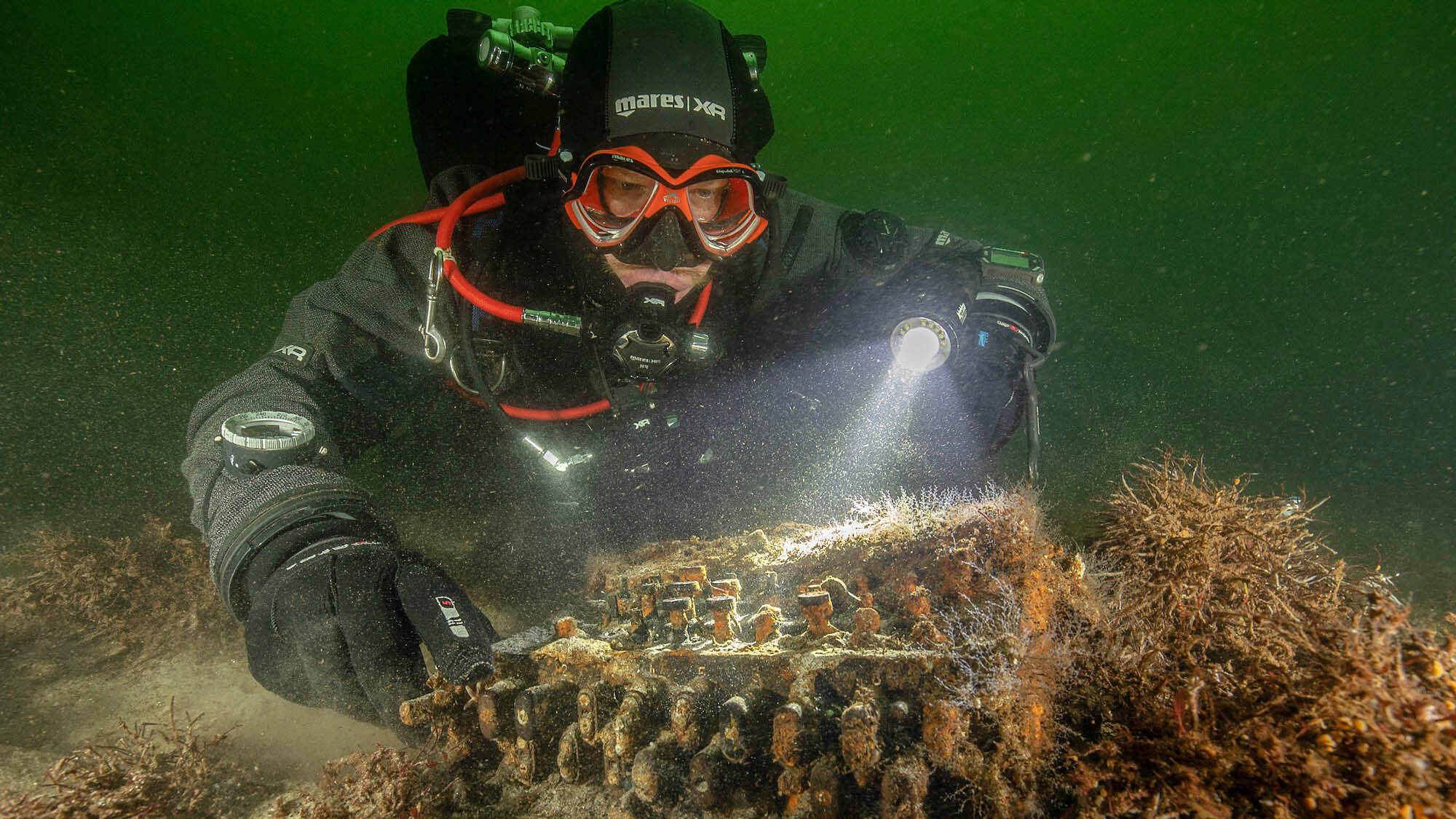 Few of these historic encryption machines have survived. This one surfaced Nov. 11 after 75 years at the bottom of Geltinger Bay, on the northern German Baltic Sea coast near Denmark.

When it reached the surface, Florian Huber, a trained underwater archeologist, recognized the historical importance of their discovery.

“We have been removing old fishing nets along this coastline for three years, but this is the first time we have found something as historically important as this,” said Huber.

The Enigma machine was key to the battlefield successes of the Nazis in the early years of World War II; it allowed them to coordinate and communicate without being understood by their enemies.

Later in the war, a cryptography team led by Britain’s Alan Turing and including Polish mathematicians Marian Rejewski, Henryk Zygalski and Jerzy Rózdotyck broke the Enigma code — and secretly used it against the Nazis.

(Several years after the war, Turing was arrested for being gay, then illegal in England, and never received the accolades he deserved. He died in 1954, an apparent suicide. His work has since been credited with laying the foundation for modern computers. Winston Churchill praised Turing for helping save England from defeat and ending the war early. Yet the crucial work done by Turing and his team was kept under wraps by the U.K. government until the 1970s.)

The Geltinger Bay Enigma no longer works, owing to its years in salt water, but when opened, it appears to be well-preserved and largely intact, Huber said. He declined to provide the exact location or depth of the discovery to discourage amateur historians and treasure hunters.

Toward the end of World War II, Geltinger Bay served as a German submarine station. But as defeat crept closer and Adolf Hitler decreed no one was allowed to surrender, the head of the naval forces, Admiral Karl Doenitz, issued the so-called Rainbow Order. Naval forces were instructed to sink all ships and submarines before letting them fall into enemy hands.

On May 5, 1945, 216 submarines were blown up or sunk, among them some 50 submarines anchored at Geltinger Bay.

The sunken submarines were recovered and scrapped a few years after the war. Ammunition is still found on the bay floor, but the Enigma machine is the most precious evidence of this period pulled out of the water in recent decades, Huber said.

Huber hopes to find a serial number and engravings to establish the place and exact time of its manufacturing, once it has been properly cleaned.

Nazi Germany produced 40,000 Enigma machines, but the vast majority were destroyed in 1945 to keep the Germans’ secrets. Only about 400 Enigma machines from the first and second generation have survived to this day. The first generation had only three cylinders — the wheels that were turned to create or decipher coded messages — while the second generation model had four cylinders and was used in all submarines from 1942 onward.

“The Enigma we found has three cylinders, which means that it almost certainly didn’t come from a submarine, but most likely from one of the boats that were used when the submarines were sunk,” Huber said.

Enigma machines are highly coveted collectors’ items and museum exhibition objects. Despite its seemingly poor condition, the Geltinger Bay Enigma would still be worth a small fortune, according to auction house Dorotheum’s expert for scientific instruments, Simon Weber-Unger.

Vienna-based Dorotheum, Central Europe’s largest auction house, has sold two Enigma machines, both the three-cylinder kind. One was sold at an auction in June 2020, for $144,000. The other will be auctioned off this week.

One of the rarest of Enigma machines was sold in an online Christie’s auction in July for $440,000. Eighteen months earlier, Sotheby’s sold an Enigma M4 for $800,000, a record.

“There are several factors that make the Enigma so valuable and popular among collectors and museums. On the one hand, it marks early computer history, on the other, it played a decisive role in World War II. It is a legendary piece of machinery,” said Weber-Unger.

Based on the photographs and footage of the Geltinger Bay Enigma, Weber-Unger estimates it could be worth between $37,000-$61,000 if it ever comes under the auction gavel.

That’s not likely, according to Huber. The Enigma is classified as a cultural heritage and belongs to the state. It will be transferred to the Archeological Museum in nearby Schleswig for a thorough examination.

“It does happen from time to time that an Enigma machine is found sitting in a loft somewhere, but what makes this particular one extremely interesting, in my view, is that it can be placed in a specific and significant historical context,” Huber said. “That’s extremely rare. It is my hope it will become part of the regional history museum’s permanent world war collection.”