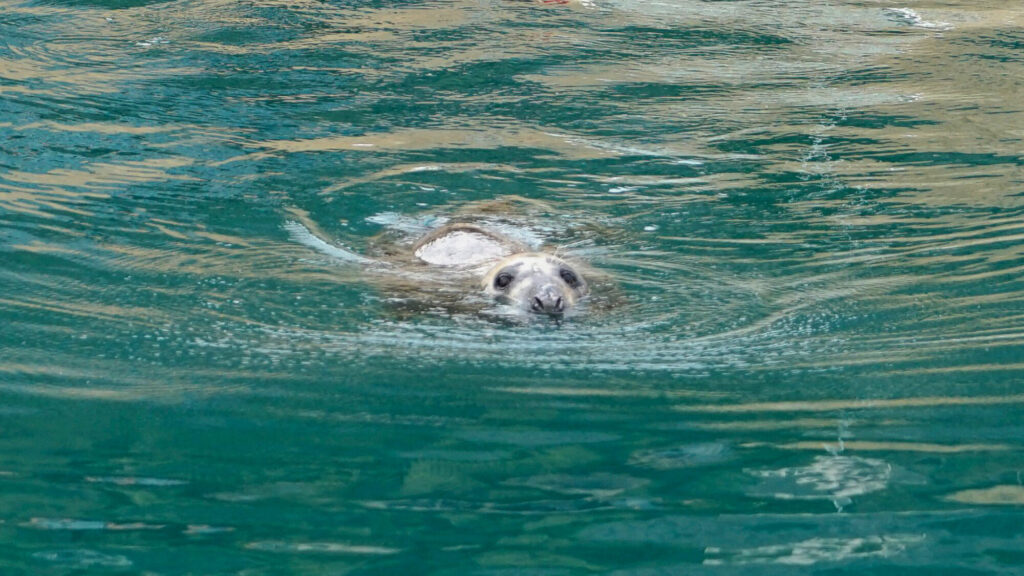 The video ends with a helper carefully aiming his blowgun at the seal and hitting it with a dart containing an antibiotic. (Oceanografic Valencia/Newsflash)

ALTEA, Spain — Spanish veterinarians were able to treat an injured seal with antibiotics fired from a blowgun. The unusual injection method was needed as the seal was skittish and difficult to catch in the water.

The gray seal (Halichoerus grypus) was first spotted at a marina in the city of Altea in the Spanish province of Alicante on Dec. 10, according to a press release from Valencia-based Oceanographic Foundation.

Veterinarians called to the scene noticed that the animal appeared to be ailing from some sort of exposure to ocean waste, but were not able to identify the exact injury or what caused it. They hoped to help the wounded animal but were unable to capture it to do so, as it swiftly swam away whenever it was approached.

“We could not stand idly by, so we had to try and cure it and remove the rubbish,” said Oceanographic Foundation conservation head Jose Luis Crespo.

Footage from the incident shows the moment the vets carry out the unusual treatment method with the help of the local police. The video ends with a helper carefully aiming his blowgun at the seal and hitting it with a dart containing an antibiotic.

The medication is effective for 30 days. The seal’s current whereabouts are unknown, but those in the area are keeping an eye out for it in case it needs help again.

With a population in excess of 316,000, the gray seal is listed as being of “least concern” on the IUCN Red List of Threatened Species. However, the organization did note that ocean-borne industrial and agricultural effluents (waste) are a threat to the species.